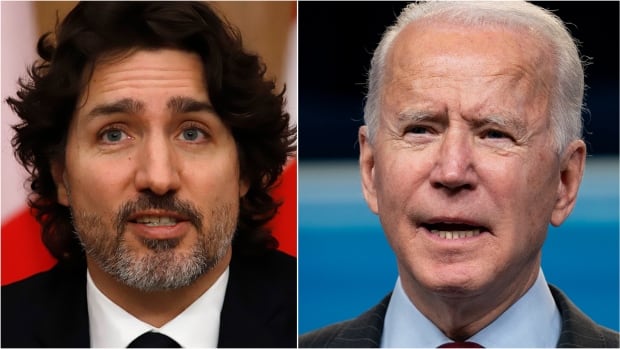 The White House released a backgrounder ahead of this afternoon’s virtual meeting between Prime Minister Justin Trudeau and US President Joe Biden.

This is Biden’s first bilateral meeting as president.

The fact sheet outlines a ‘road map’ plans for moving forward in areas of mutual interest, including COVID-19, climate change, defense and social justice. It makes no mention of some Canadian priorities, such as buying more vaccine doses, freeing Michael Spavor and Michael Kovrig from jail in China, or getting an exemption from Biden’s Buy American plan. .

Experts want Ottawa to push for an exemption so that Canada is not harmed by Biden’s plan to prioritize U.S. companies for federal infrastructure and procurement.

The fact sheet outlines six priority areas, including tackling the pandemic, rebuilding the economy on both sides of the border, and plans for a high-level climate ministerial meeting to align efforts to achieve emissions net zero by 2050.

Other areas of focus include enhancing social diversity and inclusion, expanding continental defense cooperation and modernized NORAD, and re-establishing collective engagement with global institutions. like NATO and the WTO.

It also indicates plans to resurrect the North American Leaders’ Summit – a trilateral meeting of Canada, the United States and Mexico, which has not taken place since 2016.