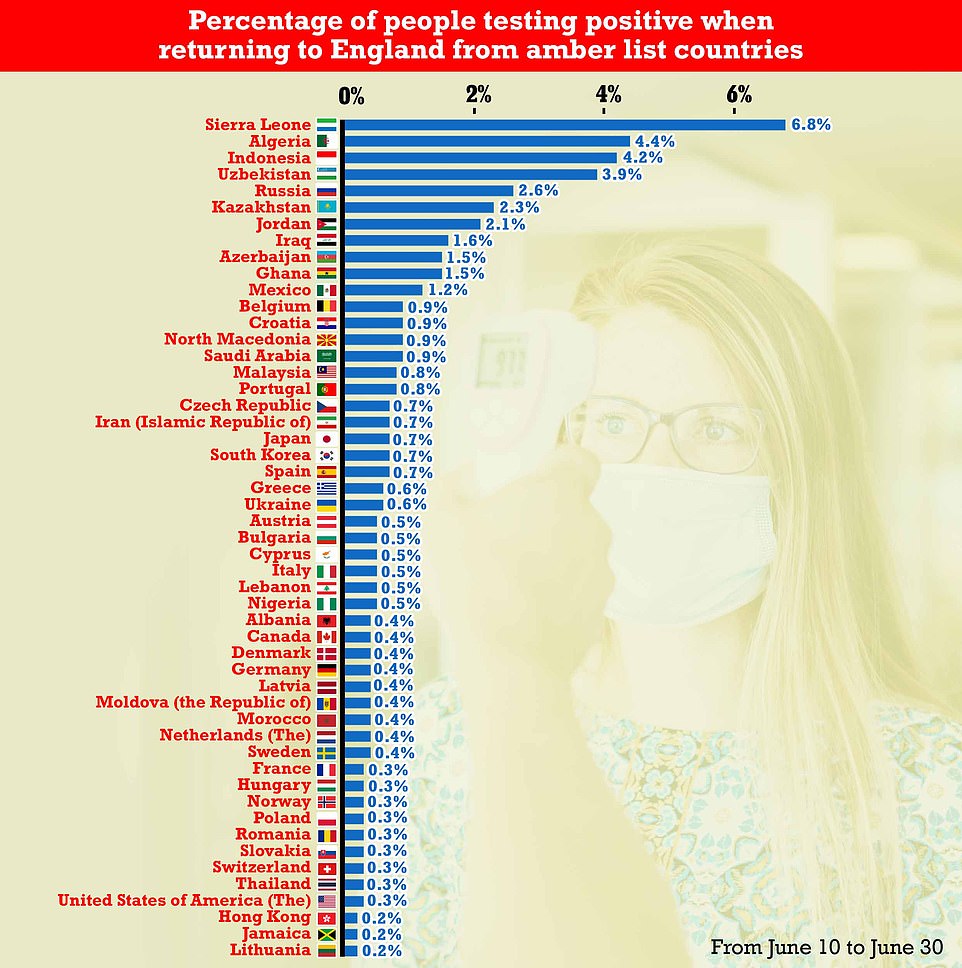 Covid positivity rates among travellers are 22 times higher for some nations on No10’s amber list compared to France, TBEN can reveal amid growing confusion over why ministers decided to place tougher quarantine rules on the nation.

Anyone who arrives in Britain from across the Channel must still self-isolate for ten days even if they are fully-vaccinated. Officials insisted the move was necessary because of the ‘persistent presence’ of the South African ‘Beta variant’, which can partially evade vaccines.

But experts poked holes in the Government’s reasoning, as other countries have higher rates of the Beta strain and more people are infected with the virus in other destinations. And fresh data released today piles further questions around why France was picked out from all other amber list countries.

Almost 30 per cent of the 1,800 cases spotted among travellers throughout June were among people who had flown into the country from Portugal and Spain. Test positivity rates in both holiday hotspots were also twice as high as France’s.

Some 0.3 per cent of people arriving in England from France tested positive for Covid, according to the most up-to-date figures released by the Department of Health. For comparison, the rate was as high as 6.8 per cent in the other amber list nation of Sierra Leone.

Leading scientists told TBEN the figures suggest France is being ‘unfairly targeted’ and it is unclear why the country has been singled out.

They argued putting ‘amber-plus’ restrictions on the country ‘makes no sense’, given separate statistics that show the proportion of cases linked to the South Africa variant is five times higher in Spain. France’s outbreak also isn’t spiralling anywhere near as quickly as it is in Spain.

The destinations with the highest rate of people testing positive on return were Sierra Leon (6.8 per cent), Algeria (4.4 per cent) and Indonesia. There were closely followed by Russia (2.6 per cent), Kazakhstan (2.3 per cent) and Jordan (2.1 per cent). The places with the lowest rates of infected travellers on return were Lithuania Jamaica and Hong Kong, with the rate of Covid among arrivals at just 0.2 per cent 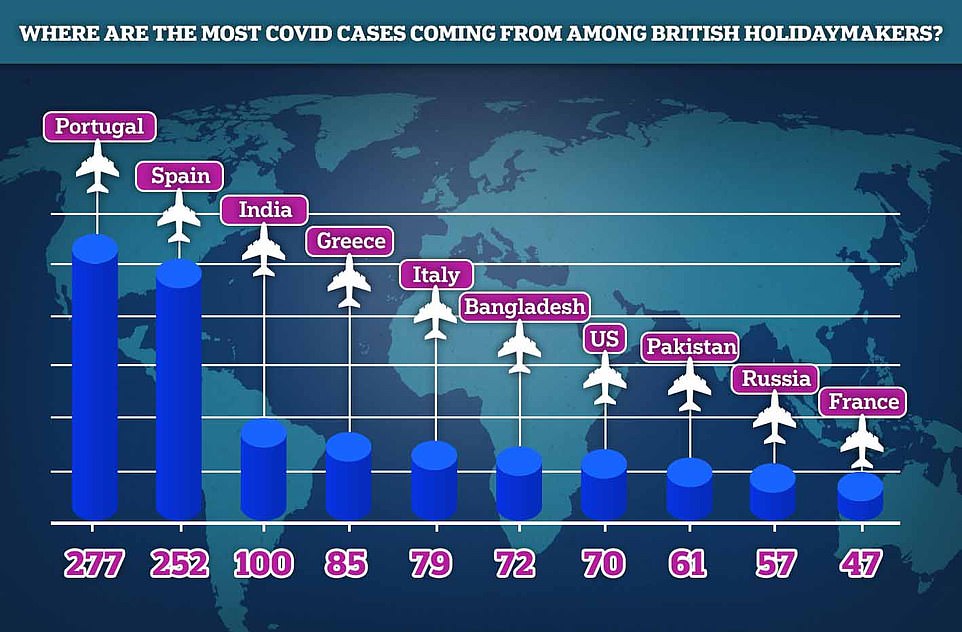 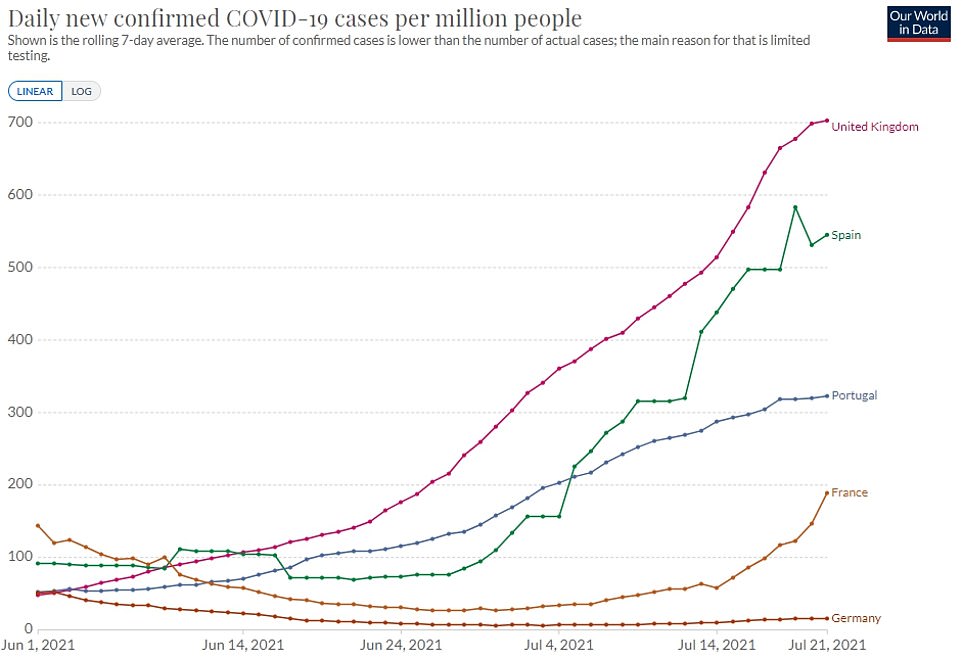 The UK continues to have the highest infection rates among western European countries. For every million people, 703 are infected in the UK, with lower rates seen in Spain (545), Portugal (323), France (189) and Germany (16). But the UK is carrying up to 10 times more Covid tests than these countries, which could impact the number of cases it identifies 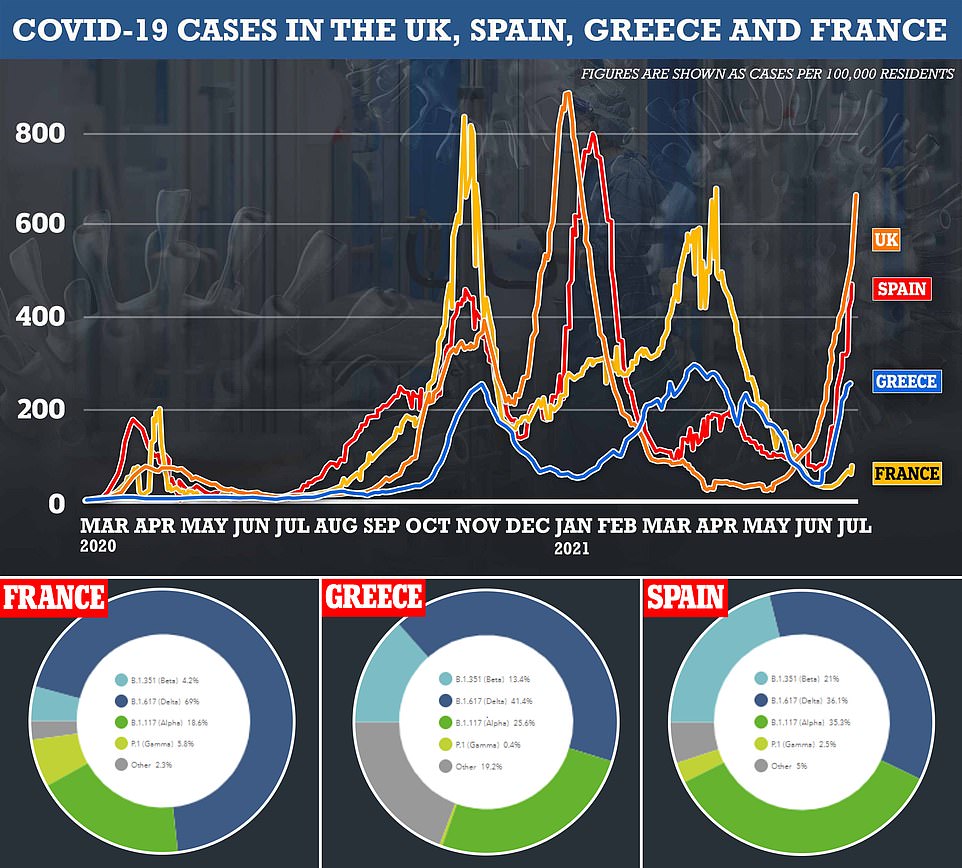 Experts were baffled over why France was singled out, given its outbreak isn’t spiralling anywhere near as quickly as it is in the other holiday hotspots of Spain and Greece — where the vaccine-resistant strain is understood to be more prevalent. Data collated by European health chiefs show the South African variant, as it is also known, was behind just four per cent of all cases in France last week. For comparison, its prevalence was five times higher in neighbouring Spain, where it made up slightly more than a fifth of all new infections. The variant was also more common in Greece (13.4 per cent)

What are the rules for people returning to England from abroad?

For all arrivals returning from an amber list country, before arriving in England, you must take a private PCR or lateral flow test in the three days before the service on which you will arrive in England departs.

For example, if you travel to England on Friday, you can take the test on or after Tuesday and will need to have the negative result available before boarding on Friday.

Before you arrive in England, everyone must also book and pay for a day two Covid-19 test, to be taken after your arrival in England.

People who are not vaccinated and anyone who has been in France in the last 10 days must also book and pay for a test on or after day eight.

You do not need to quarantine on arrival in England or take a day eight Covid-19 test, as long as you are fully vaccinated. This means that you have had your final dose of an approved vaccine at least 14 days before the date you arrive in England.

But under the Test to Release scheme you can choose to pay for a private Covid-19 test on day five. If the result is negative (and the result of your day two test result was negative or inconclusive), you can end your quarantine.

If you have been in a country or territory on the red list in the last ten days you will only be allowed to enter the UK if you are a British or Irish National, or you have residence rights in the UK.

You must also take a Covid-19 test in the three days before you arrive and book into a quarantine hotel.

While in the quarantine hotel you must also take two Covid-19 tests.

Before arriving in England, you must take a private PCR or lateral flow test in the three days before the service on which you will arrive in England departs.

You cannot take an NHS test abroad with you to use on yourself before you return. If you are returning to the UK within three days, you can use the result of a Covid-19 test that you take in the UK before you travel – but this must be from a private test provider and not the NHS.

With the aim of getting holidays going again this summer with the pandemic still raging on, ministers adopted a traffic light travel policy saying the time had come to take advantage of being one of the world’s most vaccinated countries.

Decisions on which countries appear on which list are made by ministers, based on advice provided by the Joint Biosecurity Centre — part of the UK’s Health Security Agency.

The lists are reviewed every three weeks but all countries are assumed to be amber. Brits are warned against travelling to countries on the red list, which have rapidly-growing outbreaks or are being hit hard by troublesome variants.

In a mix-up of the three-tier system however, the Department of Health last week announced that fully vaccinated people arriving in England from France from July 19 must still isolate for 10 days at home. All of the home nations adopted the same policy.

Travellers who have had both vaccines and visited any of the other 146 countries on the amber list do not have to quarantine — but do still have to take one Covid test before they are freed from home quarantine.

TBEN analysis revealed just 0.3 per cent of people returning from France tested positive for the virus in the 20 days leading up to June 30, which are the most recent figures available.

Meanwhile, more than twice the number of people returning from Spain and Portugal — the most popular holiday hotspots — had the virus when they got back to England.

The amber list destinations with the highest rate of people testing positive for Covid on return were Sierra Leone (6.8 per cent), Algeria (4.4 per cent) and Indonesia. There were followed by Russia (2.6 per cent), Kazakhstan (2.3 per cent) and Jordan (2.1 per cent).

The places with the lowest rates of infected travellers on return were Lithuania, Jamaica and Hong Kong, with the rate of Covid among arrivals at just 0.2 per cent.

But when deciding to put France on the amber-plus list last week, the Government may have had access to more up-to-date figures that aren’t available to the public.

The UK continues to have the highest infection rates among western European countries. For every million people, 703 are infected every day in the UK, compared to Spain (545), Portugal (323), France (189) and Germany (16).

But the UK is carrying up to 10 times more Covid tests than these countries, which could impact the number of cases it identifies.

Professor Richard Tedder, a virologist at Imperial College London, told TBEN: ‘I do not understand what criteria the Government are using to put countries on the amber list, or why France has been singled out when the prevalence of infected people is higher in other countries.

‘Any country with high infection rates should be considered for the amber-plus list, so everyone is required to quarantine on return.

‘The vaccines are not completely effective and with every challenge to them, how quickly could it be before a variant gets around vaccine?

‘It’s another stress on the vaccine induced immunity which could easily be managed by making everyone isolate on return.

‘Right now we are just mixing and matching variants and vaccines will not thank us for that as they could become less effective.’

Professor Gary McLean, an immunologist at London Metropolitan University, told TBEN: ‘It certainly looks like, if you simply look at the numbers of positive cases from those countries, that France is being unfairly targeted here.

‘There is likely another issue that is not being reported widely and that France has higher levels of the Beta variant (originated in South Africa) which is known to evade vaccine immunity better than other variants and keeping that out of the UK would be good.

‘Also perhaps the number of different ways one can enter the UK from France, by private car for example rather than just flights, has influenced the decision.

‘I fully expect countries with increasing case numbers to be added to the amber plus in the future, however the UK should expect reciprocal behaviour for our citizens’ travel as we currently have the worst numbers in Europe.

‘It would be foolish for other countries not to recognise that.’

Professor Lawrence Young, a virologist at the University of Warwick, told TBEN: ‘The whole thing with France and amber-plus is perplexing given the higher levels of Beta variant infection in Spain.

‘The original argument from government for placing France on the ‘amber-plus’ list was based on the prevalence of infection with the beta variant and concerns that returning travellers would bring this more vaccine-resistant variant back to the UK.

‘But with higher levels of beta variant infection in Spain this makes no sense. We certainly need to keep an eye on the overall infection rates in other countries but these are currently lower than in the UK.

‘One associated issue is the level of vaccination in different EU countries and how this might play out in terms of the spread of infection – these are lower in France, Italy, Portugal and Spain and far lower in Greece.

‘This might be a factor in the government’s thinking but otherwise it’s all a mess with no consistent approach and a real lack of joined-up thinking.’

France’s Covid-19 “health pass”: where it is mandatory and what will change on August 9

The Bharat Express News - August 2, 2021 0
The Money Heist season 5 trailer is here. As promised, Netflix unveiled the first 90-second trailer for the first half of Season 5...

Active Bitcoin addresses jumped 30% at the end of July, data...

A bushfire in Hawaii exceeds 40,000 acres and causes evacuations.