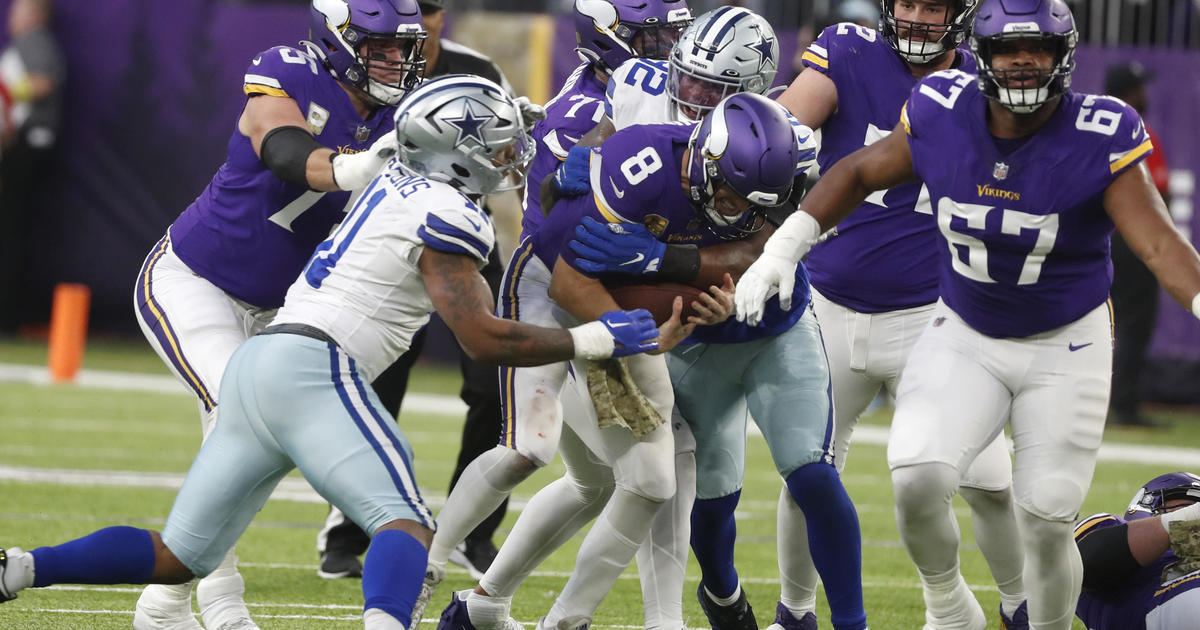 MINNEAPOLIS — Tony Pollard had two touchdown catches for Dallas with a career-high 189 yards from scrimmage, and the Cowboys sacked Kirk Cousins ​​a career-most seven times in a 40-3 victory over Minnesota on Sunday that won the Vikings’ seven games won streak to a halt.

Dak Prescott was flawless at quarterback, Ezekiel Elliott rushed for two scores on his return from injury, and Brett Maher made four field goals – including a 60-year-old to close out the first half. The Cowboys (7-3) only kicked on their eighth possession and the defense was just as good.

Micah Parsons and Dorance Armstrong each had two sacks in the fifth-biggest loss ever for the Vikings—and the biggest road win in Cowboys history.

The Vikings (8-2) are king of comebacks in an NFL season with the smallest average winning margin in 90 years, nothing more remarkable than last week at Buffalo when they turned a 17-point deficit late in the third quarter into an overtime win .

Parsons promised Prescott and the offense this week that the Cowboys would never again lose a 14-point lead in the fourth quarter as they did last week for the first time in franchise history when they fell into overtime in Green Bay.

They executed a near-perfect game plan with stunning ease against a team that went into the week tied for the best record in the league.

ALSO READ  "It doesn't have to be hot": Vikings fans brave the cold ahead of winter stretch

After surrendering 200 rushing yards in consecutive games for the first time since their first season in 1960, the Cowboys flipped the script by gaining 108 yards on the ground in the first half. Seven of their eight third-down conversions came by rushing, then they unleashed Pollard as a backfield pass catcher.

The epitome of the blowout came shortly after halftime as the Cowboys faced third-and-14. In no rush to pitch—he wasn’t sacked all afternoon—Prescott found Pollard in a one-on-one mismatch with linebacker Jordan Hicks and scored a pass down the sideline for a 68-yard score that gave Dallas a 30–3 lead. yielded. The Vikings were so upset that they conceded six penalties for 54 yards in the third quarter alone.

Cousins ​​went 12 for 23 for 105 yards and a lost fumble that forced Parsons with a blind sack the first time the Vikings tried to pass. Coming off a career-high 193 receiving yards against the Bills, Justin Jefferson had 33 yards on three catches.

Pollard, the Cowboys’ most dangerous offensive weapon all year, finished with six catches for 109 yards and 15 rushes for 80 yards.

SO MUCH FOR CLOSING GAMES

Maher has four career field goals over 60 yards, the most in NFL history. No one else has more than two. He even made the 60-year-old twice, after a late stoppage for a replay review nullified the first attempt before the Cowboys heard the whistle.

Cowboys: LB Anthony Barr (hamstring) was inactive against his former team. He played eight seasons for the Vikings, who drafted him in the first round in 2014. DT Quinton Bohanna (sickness) was also scraped, replaced by Neville Gallimore. … CB Kelvin Joseph (illness) did not play in the second half.

Vikings: LT Christian Darrisaw, who was forced out of the previous game with a concussion, was beaten by Parsons for the strip sack and later by Armstrong for another sack to cause a punt in the second quarter. Then he went back into concussion protocol. …CB Andrew Booth Jr. got his first career start for fellow rookie Akayleb Evans (concussion), who filled in for Cameron Dantzler (single) last week. DT Dalvin Tomlinson (calf) missed his third game in a row and James Lynch took his spot again. …LG Ezra Cleveland left with an injury in the third quarter.

Vikings: Host the New England Patriots on Thursday night, the first Thanksgiving Day home game in franchise history. They last played the holiday in 2017, a 30-23 victory in Detroit.

New Zealand on a plate