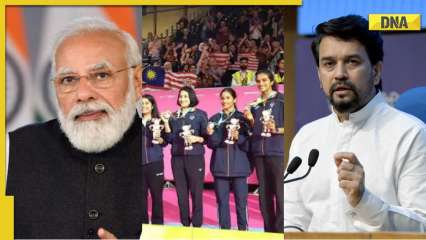 READ: CWG 2022: Discouraged by a loss in the mixed team event and will shift focus to the individual event, says PV Sindhu

Only PV Sindhu managed to take a win in the top match against Malaysia in the women’s singles.

“Badminton is one of the most admired sports in India. The silver medal in the CWG will go a long way towards making the game even more popular and getting more people to play it in the near future,” the prime minister tweeted.

Badminton is one of the most admired sports in India. The silver medal in the CWG will go a long way in making the game even more popular and getting more people to pursue it in the near future. pic.twitter.com/RypZ0r3Lca— Narendra Modi (@narendramodi) August 3, 2022

In the first match of the draw, India’s Chirag Shetty and Satwiksairaj Rankireddy were locked in a tough first match against Malaysian Teng Fong Aaron Chia and Wooi Yik. In the hard-fought neck-and-neck match, the Malaysian duo drew first blood, winning the first match 21-18, 21-15.

ALSO READ  Durand Cup 2022: Schedule, Teams, Live Broadcast in India and Everything You Need to Know

In the second game of the draw, PV Sindhu faced Jin Wei Goh. In the opening match of the match, the double Olympic medalist played aggressively, taking a one-match lead over Malayasia’s Jin Wei Goh 22-20. The Star Indian shuttle looked fast, accurate and extremely dangerous, claiming the second game and match 22-20, 21-17 to get India back into the game.

READ: Happy Birthday Sunil Chhetri: Here are some of the interesting facts about the Indian football skipper as he turns 38

In the third game of the draw, Kidambi Srikanth lost 19-21 to Malaysian Ng Tze Yong in the opening game. The Malaysian player kept up his pace and momentum, taking a stunning victory over the Indian ace 21-19, 6-21, 21-16 in a game that lasted one hour and six minutes. Malaysia took a 2-1 lead after the game.

In the fourth game of the match, Treesa Jolly and Gayatri Gopichand went up against Muralitharan Thinaah and Koong Le Pearly Tan. The Indian pair lost the first game 18-21. The Malaysian pair won the second game 21-17 to take the gold medal in Games 2022.