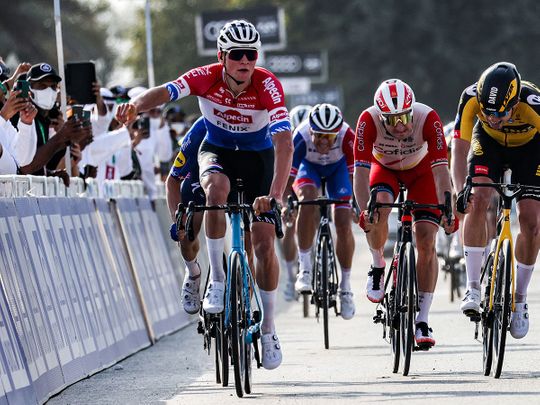 Dubai: The Alpecin-Fenix ​​cycling team withdrew from the UAE Tour on Monday after a staff member tested positive after the first leg of the seven-day race.

Dutchman Mathieu van der Poel won Sunday’s first stage for Alpecin-Felix in a sprint as the first major cycling race of the season began in the United Arab Emirates.

“Alpecin-Fenix, in agreement with the organizer of the UAE Tour, has decided to withdraw its team from the race, in order to save the racing bubble and ensure the safe continuation of the race,” said the team in a statement. “The team was informed of a positive result from a member of its staff during the series of tests carried out on Sunday evening February 21. After receiving the results, the person immediately self-isolated, and everyone who came into contact with that person self-isolates.

A 13 km individual time trial around Al Hudayriyat Island awaited the riders on Monday’s second stage. The race was interrupted last year by an outbreak of COVID-19 among the teams, making it one of the first international sporting events to feel the effects of the pandemic.

Strict measures are in place this year to prevent a recurrence, with staff and passengers staying in separate hotels.

ALSO READ  From February 18, sunset in UAE will show precisely the direction of Qibla

Dubai couple accused of having had sex outside of marriage acquitted

The Bharat Express News - March 4, 2021 0
Ten years after the worst nuclear accident since Chernobyl, the land of Japan identified to be cleaned from the triple reactor meltdown at Fukushima...