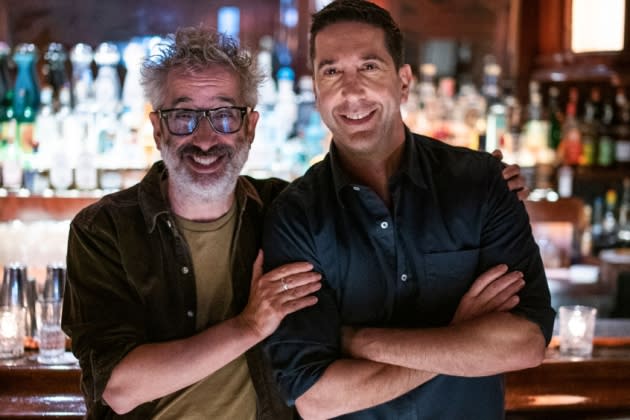 “Jews Don’t Count,” a new documentary by British writer and comedian David Baddiel airing next week on British broadcaster Channel 4, explores how, especially in progressive circles, there is a persistent sense that Jews are not right to the same protection and support as other minority communities. That sentiment is based on the anti-Semitic belief that all Jews are wealthy, successful and “dominate” industries like Hollywood, if not the world order.

It is symbolic of the catch-22 at the heart of the film that the succession of Jewish celebrities who appear in it to talk about their experiences with anti-Semitism, such as David Schwimmer, Sarah Silverman, Stephen Fry and Jonathan Safran Foer, end up further convincing anti-Semites. that the premise of the documentary is unfounded.

Baddiel, a comedian and writer, acknowledged that predicament at a press screening in London on Wednesday, though he was ultimately optimistic about it. “I want [the documentary] not only be seen by Jews,” he explained. “A really simple way to do that is hopefully to have big names in it. It’s a pragmatic decision.”

Despite the star guest list, when Variety When asked if there were any Jewish public figures who had declined to appear in the film, Baddiel replied “quite a lot”. Out of respect for their privacy, he did not reveal their names, but said the list included “some quite prominent Jews who don’t want to bring up their Jewishness and just don’t want to talk about it.”

“This” is the awkward but important discussion of how anti-Semitism presents itself today. On the right, it has remained largely unchanged from the days of the Nazi Party in Europe and the Ku Klux Klan in the US. and it is here, as Baddiel demonstrates in the documentary, that it takes on a more insidious form, firstly by disguising itself in terms that, while not explicitly discriminatory, serve to exclude only Jews from supposedly inclusive spaces, and secondly second, by refusing to engage when Jews are subjected to the kind of treatment that would cause outrage on behalf of other groups (for example, inauthentic casting).

“Especially over the last 20 years, with social media and everything else, I think there’s been an incredible focus on trying to right wrongs, a lot of which has been right,” Baddiel said during the Q&A. “But part of that was performative. And I think within the performative space, [in which] people [are] trying to make it clear that they are allies in a way that has more to do with their sense of self than actual allyship, Jews have no currency for them.

The documentary is based on Baddiel’s non-fiction book of the same name, but the two are different projects. “The book is a very personal piece of work,” he explained during the Q&A. “I am talking about my own experience with this particular phenomenon. [In the documentary] I can talk to other Jews and they can tell me if they have experienced the same thing. As it turns out, this is something that, as Sarah Silverman says, many Jews have felt for a long time, but may not have been put into words before.”

“And I think the other thing the book can’t do is you can feel things like the Colleyville incident, for example,” Baddiel continued, referring to the hostage crisis that happened early this year in which a young British man was held in a synagogue Texas at gunpoint. Convinced of the power and influence of the Jews, the hostage-taker randomly selected the synagogue to demand that an unaffiliated (and bewildered) New York rabbi order the release of a prisoner and suspected al-Qaeda operative from Fort Worth.

The rabbi, Angela Buchdahl, also appears in ‘Jews Don’t Count’. “The way we’ve portrayed it, you can feel what that’s like [her] suddenly cast as this ridiculous stereotype of Jewish power that she has four human lives on her hands,” Baddiel said.

He also shows how Jewish schools in the UK participate in active target practice, an exercise almost unheard of in Britain, linking it to festering anti-Semitism on all sides of the political divide.

Despite its down-to-earth subject matter, audiences may be surprised to find that “Jews Don’t Count” also had plenty of laughs (at one point Silverman proclaims “I love money!” before acknowledging that this documentary probably isn’t the best place to say that out loud). “It’s an essential part of a Jewish tradition that when you talk about problems and horrible things, you also try to be funny about it,” Baddiel said.

The documentary also sees Baddiel, who rose to fame as a comedian, struggle with anti-Semitism in the industry. The film explores ‘Bo’ Selecta!’, an early 2000s British sketch show in which comedian Leigh Francis dressed up as a number of public figures, including black (and Jewish) musician Craig David, for which Francis wore blackface. Francis also caricatured Baddiel on the show, depicting him with a hooked nose, long curly side locks (which Baddiel never wore), and a thick accent. It was an image that a friend of Baddiel apparently found so abhorrent that he suggested it was a hate crime.

In 2020, Francis released a video apologizing for portraying black celebrities, including David and Michael Jackson. Baddiel, however, received no apology from Francis. “I don’t like inviting other comedians. We’re comedians and it’s weird to do that. But in this particular case it is such a clear example of selective outrage in that, as far as I know, no one has ever drawn any attention to it [lack of apology]said Baddiel during the Q&A. He also revealed that Francis turned down a request to appear in “Jews Don’t Count”.

During the Q&A, Baddiel also discussed Dave Chappelle’s SNL monologue about Kanye West, which took place a few days earlier. “I love Dave Chappelle, he’s a brilliant comedian,” Baddiel said, but added that he had found the SNL monologue “weird.” “Dave Chappelle basically said, ‘Look, Kanye is right. We can’t say it out loud, but Kanye was right, because look what happened to him,'” Baddiel said, referring to the many brands that had ties to West broken after his litany of public anti-Semitic remarks, including a threat to death con 3 on Jewish people [sic].”

“There are consequences, such as there are [in the case of] all other minorities, when people say racist or discriminatory things,” said Baddiel. “But with Jews, those consequences seem indicative of Jewish power.”

One of the most powerful moments in ‘Jews Don’t Count’ is when Baddiel tackles his own racist caricature of black British footballer Jason Lee on a 1990s TBEN sketch show called ‘Fantasy Football League’. In the show, Baddiel appeared in Blackface as Lee with a pineapple on his head, while his co-host, Frank Skinner, played Lee’s manager.

Baddiel has publicly apologized for the sketch on a number of occasions, but had never met Lee in person. In the documentary, he is a guest on Lee’s podcast “AbsoluteLee,” in which he apologizes again. The duo then have a discussion about both racism and anti-Semitism. During the Q&A, Baddiel revealed that while it’s not shown in the document, he once again apologized to Lee before leaving the podcast studio. “I just went back to him and said, ‘I’m sorry again.’ And he just said, “It’s done now.” And shook my hand.” The experience, Baddiel said, was difficult, but he was thankful for it: “I’m really glad I did it.”

In the end, “Jews Don’t Count” ends on a hopeful note. “I do think the dial shifts, I say that at the end of the film,” said Baddiel. “I think things have definitely moved on since I wrote the book. Hopefully the film will make people think.”