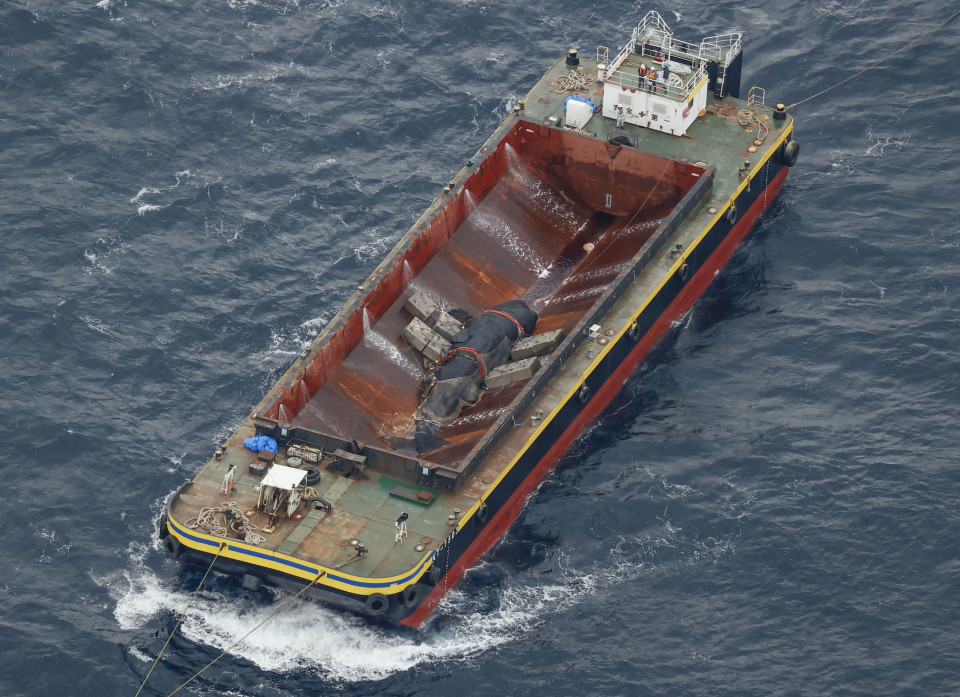 A sperm whale that died after being seen struggling near the mouth of Osaka’s Yodo River last week was sent to the seabed off the Kii Peninsula south of Osaka Bay on Thursday, the city’s port office said.

The approximately 15-meter-long male whale affectionately dubbed “Yodo-chan” on social media was transported by ship after being attached to 30-tonne concrete blocks to weigh him down once in the water.

The vessel carrying the whale’s corpse was towed by a tugboat from a wharf near the mouth of the Yodo River in the early hours of Thursday, the agency said.

The ship was taken south between Wakayama and Tokushima prefectures and the cetacean plunged into the water just after 3 p.m.

Photo taken from a TBEN News helicopter on Jan. 19, 2023, shows a dead whale being sent to the seabed with 30-ton concrete blocks from a ship off the Kii Peninsula, western Japan. The 15-meter male sperm whale, first sighted on Jan. 9 near the mouth of the Yodo River in Osaka, continued to fade and was confirmed dead four days later. (TBEN) ==TBEN

The whale, which weighed 38 tons, was first sighted on Jan. 9 after straying into the mouth of the river. It continued to weaken and experts confirmed on Friday that it had died.

Osaka Mayor Ichiro Matsui told reporters on Tuesday that while there had initially been talk of temporarily burying the whale’s body on land to reduce it to a skeletal specimen for display in a museum, the plans were scrapped. given up because the government received no requests for the animal. remains.

Whales are rarely sighted in Osaka Bay, according to the Coast Guard. The bay is largely enclosed by Awaji Island, leaving two narrow passages to the north and south, the latter of which leads to the Pacific Ocean.

Dead whale in Osaka is sunk off the coast this week

Whale spotted at the mouth of the Yodo River in Osaka