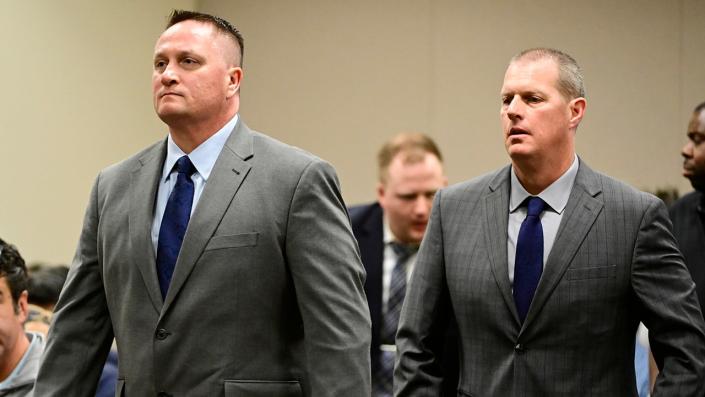 Police officers, two paramedics and another Colorado official accused of being responsible for the death of Elijah McClain, a 23-year-old black man who died after being handcuffed and injected with a powerful sedative, plead not guilty on Friday to several counts. charges, including manslaughter and negligent homicide.

The officials did not speak, except to acknowledge that they understood their rights.

McClain died on August 24, 2019 after clashing with police after leaving a grocery store in Aurora.

At the time, McClain, a massage therapist, was wearing a ski mask, according to the indictment. He went into the store, bought an iced tea, and went out again. The police then approached him.

He had not been charged with any crime, but the situation quickly escalated.

The three officers claimed that McClain resisted their instructions and forcibly restrained him.

During their interaction, McClain was handcuffed to the floor, complained that he couldn’t breathe and vomited several times, according to the indictment.

According to the document, McClain lost consciousness and was injected with ketamine.

Relatives of McClain have since said he wore the mask because his anemia left him cold. “I’m just different,” you can hear McClain explain in the released bodycam footage.

Subsequently, a police liability law was passed in Colorado that banned chokeholds and placed restrictions on ketamine use.

A grand jury indicted the five officials who contributed to the arrest and death with 32 counts including manslaughter, negligent homicide and other charges in 2021. The indictment came after the Democratic government Jared Polis instructed Attorney General Phil Weiser to open a criminal investigation into the matter.

An initial autopsy report concluded that the dose of ketamine was higher than recommended for someone his size, but his manner of death was still listed as undetermined, not homicide.

AURORA POLICE IN COLORADO SUBJECT TO USE OF VIOLENCE DURING ELIJAH MCCLAIN PROTEST: REPORT

McClain most likely would have survived had it not been for the dose, the autopsy also found, but did not specify that it caused his death.

An amended autopsy report was released in September last year.

It said McClain died due to complications from ketamine administration after being forcibly restrained.

Dr. Stephen Cina, a pathologist, said in the autopsy that he couldn’t rule out changes in McClain’s blood chemistry due to his exertion while he was detained by police contributed to his death, but concluded there was no evidence of injuries caused his death by the police. dead.

Relatives and others filled the small courtroom, where they watched the oral arguments and watched as the judge drafted three separate lawsuits for the officials.

Megan Downing, an attorney representing Woodyard, declined to comment at the trial, saying any defense she offered against the charges would end up in grand jury materials, which remain sealed.

The lawyers for the other defendants also left court without commenting on the charges.

In 2021, the City of Aurora agreed to settle a $15 million lawsuit brought by McClain’s parents.

His death sparked protests against police and law enforcement.