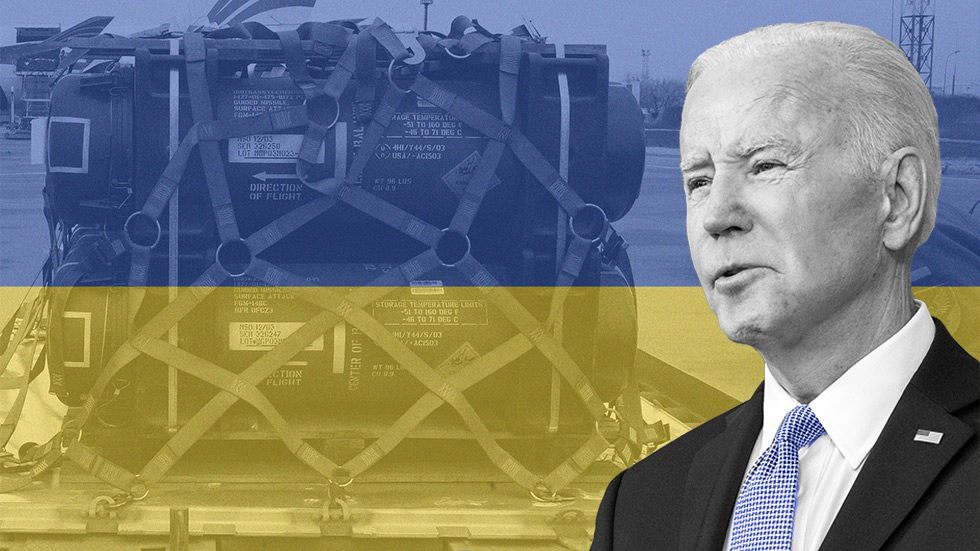 The Biden administration will send $3.75 billion in new military aid to Ukraine and other countries related to the war in Russia that has lasted more than 10 months.

We’ll share what’s in it plus details about a trip by two US senators to Ukraine, the new US sanctions against Iran and a memorial day on the second anniversary of the January 6, 2021 attack on the Capitol.

This is Defense & National Security, your guide to the latest developments at the Pentagon, on Capitol Hill and beyond. For The Hill, I’m Ellen Mitchell. Has a friend forwarded this newsletter to you?

The latest news about politics and policy. Straight to your inbox. Sign up for the Defense and National Security newsletter

The Biden administration on Friday announced $3.75 billion in new military aid to Ukraine and other countries related to Russia’s more than 10-month war.

A first: The aid package directs the Department of Defense to withdraw $2.85 billion in military equipment from its stockpiles, including Bradley infantry fighting vehicles.

The lightly armored and tracked vehicles provide medium and long-range firepower and can destroy other military vehicles, including tanks.

Also included: The US will also send artillery systems, armored personnel carriers, surface-to-air missiles and munitions to Ukraine as part of the Pentagon’s $2.85 billion withdrawal.

Padding: But another portion of the nearly $4 billion draw includes $682 million in foreign military funding to partner European countries and allies “to boost and supplement donations of military equipment to Ukraine.”

Senators Jack Reed (DR.I.) and Angus King (I-Maine), both members of the Senate Intelligence and Armed Forces committees, also met with senior Ukrainian officials and members of the U.S. Embassy.

The journey: Reed, who chairs the Armed Services Committee, tweeted that he had traveled with King to show solidarity with “brave Ukrainians fighting to defend their homeland against a Russian invasion” and called the meeting with Zelensky “productive.”

To keep up with: Politico reported last month that a September telegram sent by U.S. ambassador to Ukraine Bridget Brink raised concerns about major barriers to tracking U.S. military aid and its functioning — but said the embassy was working to set up different approaches and mechanisms for tracking aid.

Still, King said he will return to the US “tremendously impressed with the level of accounting and accountability for the use of these materials and funds,” according to the transcript of his press conference provided by his office.

“So one of my jobs is to make sure that the resources provided by the American people are accounted for and spent for the purposes for which they are intended,” he said. “I leave convinced that is the case.”

The Biden administration issued new sanctions on Friday against Iran’s drone and missile production, in an effort to disrupt the flow of weapons Tehran is supplying Moscow for its war in Ukraine.

“Iran has now become Russia’s largest military financier,” Foreign Minister Antony Blinken said in a statement. Iran must end its support for Russia’s unprovoked war of aggression in Ukraine, and we will continue to use every tool at our disposal to disrupt and delay these transfers and impose costs on actors involved in this activity. .”

Blacklisted: The US has blacklisted seven individuals who hold senior positions at Qods Aviation Industries, an Iranian defense manufacturer responsible for the design and production of unmanned aerial vehicles (UAVs) or drones, Blinken continued.

Those sanctioned include the director of Iran’s Aerospace Industries Organization (AIO), the primary organization responsible for overseeing Iran’s ballistic missile programs, the statement said. The US itself has also put AIO on its sanctions list.

To cut a weapon line: Treasury Secretary Janet Yellen said in a statement that Russia’s reliance on Iran shows how sanctions imposed by a US-led coalition are undermining its ability to replace lost weapons on the battlefield.

“The Kremlin’s reliance on suppliers of last resort, such as Iran, demonstrates their desperation…” Yellen said.

What the sanctions do: The sanctions block all assets of the individuals in the US, as well as all entities in the US that are directly or indirectly 50 percent or more owned by one of the blocked individuals.

The sanctions generally prohibit Americans or persons in the US from doing business with individuals, including transactions through the US. Furthermore, persons who enter into certain transactions with persons or entities on the blacklist run the risk of being subjected to sanctions themselves.

earlier: The new designations are in addition to previous sanctions against Iran’s arms industry, announced in September, November and December.

House Democrats — and one Republican — paused for a short but emotional ceremony marking the second anniversary of the January 6 attack on the Capitol.

The legislators gathered on the steps of the house with the families of officers who lost their lives in connection with the riot and honored both the fallen officers and the wounded in the protracted battle with those who stormed the Capitol.

Honoring the fallen: Relatives or representatives read the names of each officer who died in connection with the riot — Capitol Police Officers Brian Sicknick and Howard Liebengood, and Metropolitan Police Officers Jeffrey Smith, Gunther Hashida, and Kyle DeFreytag.

The family of Billy Evans, a Capitol police officer who was killed after a man rammed into the Capitol barricades and drew a knife at officers, was also present, his name being read aloud by his two young sons.

In the meantime: The memorial was held as the majority of the GOP gathered for a call to discuss a pending twelfth ballot to determine who will serve as Speaker of the House.

Representative Brian Fitzpatrick (Pa.) turned out to be the only Republican to attend the January 6 commemoration.

ON TAP FOR MONDAY

The Center for Strategic and International Studies will launch a report on “The First Battle of the Next War: Wargaming a Chinese Invasion of Taiwan” at 2 p.m.

That’s it for today! Check out The Hill’s defense and national security pages for the latest coverage. See you on Monday!