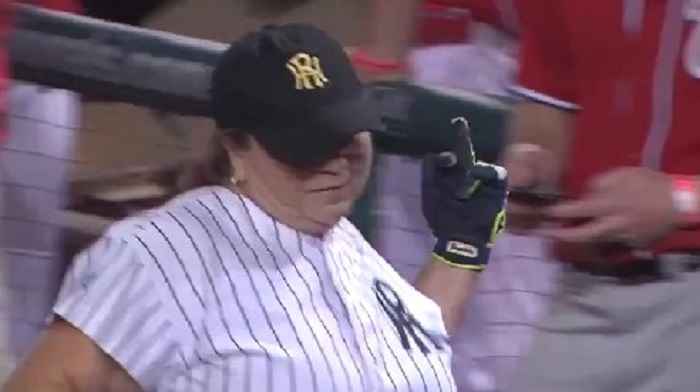 Representative Linda Sanchez, who was captured on video turning the bird toward the Republican dugout during the annual Congressional Baseball Game for charity, appeared to change her story after initially accusing GOP lawmakers of creating “offensive and misogynistic” comments.

Sanchez (D-CA) walked in the sixth inning of the game on Thursday and was replaced by a pinch runner.

Jogging off the field, she looked back at the Republican dugout and expressed her feelings with a middle finger gesture.

TBEN reported on the incident Friday, but little was known about what was said in the GOP’s dugout to instigate Sanchez’s obscene gesture at a charity event to raise money for the Boys and Girls Club. from DC.

Democrat Rep. Linda Sanchez (CA) cuts out of the Republican dugout. Her team was blown out 10-0.pic.twitter.com/CgPOaEsLs4

Consider it a lesson learned for this author.

When I first reported on the incident, I gave Sanchez the benefit of the doubt despite online criticism, even imagining a scenario where she playfully chatted with the Republican ballplayers.

But as a Democrat who would never let an incident go to waste when political points can be scored, she released a statement that seemed a little far-fetched from the start.

In a statement released to multiple outlets on Friday, Sanchez explained her actions.

“The Congressional Baseball Game is one of my favorite events of the year. It’s a good cause and brings both sides of the aisle together for an evening free from partisan politics,” she said.

“That’s why it really hit a nerve when I heard an insulting and misogynistic comment from the Republican side on my way back to the dugout.”

Rep. Sanchez said she jumped out of the Republican dugout after hearing an “offensive and misogynistic comment.” In the heat of the moment I reacted. I have no tolerance for men who make women feel unimportant or out of place, especially on the pitch.” pic.twitter.com/vLtsjnca33

After seemingly blaming Republican players for falling over someone during a charity baseball game, rep Linda Sanchez appeared to be coming back.

She knew who seemed to blame the first statement.

Sanchez later told NBC News’ Frank Thorp that the alleged comment that caused her to make the obscene gesture came from a fan.

“It wasn’t the team. It was an annoying fan yelling misogynistic shit at me every year,” she claimed.

Meanwhile, Rep @LindaTSanchez that she didn’t turn down the GOP team at the Cong Baseball game last night and told me, “It wasn’t the team. It was an annoying fan who yelled misogynistic shit at me every year.”

But even the clarification leaves some skeptics behind.

Corey Inganamort, whose LinkedIn profile states that he is the mascot coordinator for the Washington Nationals, claimed he was in the dugout at the time of the incident.

Inganamort stated that “nothing” was said controversially by “everyone”.

I was in the dugout with the Republicans last night.

No one said anything offensive or misogynistic.

In fact, everyone was shocked by what? @RepLindaSanchez did. pic.twitter.com/n0n7qdcFJs

Without being there, it’s nearly impossible to know what comments from fans could have rained down on the field during the charity baseball game.

But Sanchez’s story seems a bit fuzzy, as she first blamed “the Republican side” only to later shift the blame to a fan.

If, as the Congresswoman claims, there’s a fan who “calls misogynistic shit at me every year” at a charity event, why wasn’t that person escorted out of the game never to return?

You’d think an obnoxious fan would have been kicked out for ruining a fun charity event to promote unity and not be allowed to continue their antics.