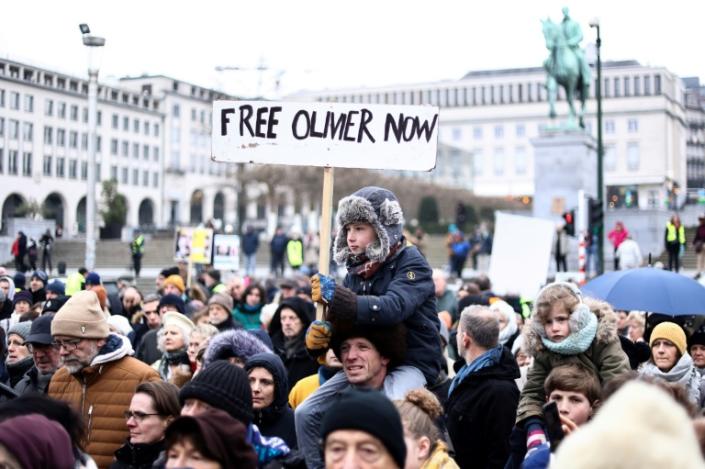 Hundreds of demonstrators on Sunday urged Belgium to push harder for the release of aid worker Olivier Vandecasteele, who is being held by Iran in a case dismissed as “hostage diplomacy”.

The crowd, gathered in freezing temperatures in the center of Brussels, chanted “Free Olivier” and sang Happy Birthday to celebrate Vandecasteele’s 42nd birthday this week.

“The aim is to show the government that we cannot leave an innocent person there,” his sister Nathalie told TBEN.

Olivier Van Steirtegem, a spokesperson for the family, stressed that “every minute, every second counts” and that they hoped that the growing public pressure for his release would prompt the Belgian authorities to find a solution more quickly.

Iran arrested Vandecasteele in February 2022 and he has been held ever since in conditions described by the Belgian government as “inhumane”.

Authorities this month sentenced him to more than 12 years behind bars for “espionage” and also ordered him to be lashed 74 times.

His backers and rights groups claim he is being held as part of Iran’s “hostage diplomacy” to try to get Belgium to release an Iranian diplomat imprisoned for terrorism.

The diplomat, Assadollah Assadi, was found guilty in 2021 of masterminding a plot to blow up an event organized in 2018 by an Iranian exiled opposition group outside Paris.

The plot was foiled by European intelligence services and Assadi, a diplomat stationed in Austria who was found to have supplied the explosives for the bomb, was sentenced to 20 years in prison.

In July last year, Belgium and Iran signed a prisoner exchange treaty that Brussels saw as a path to the liberation of Vandecasteele.

But Belgium’s Constitutional Court suspended the treaty after exiled Iranian opposition members challenged it on the grounds that it would lead to Assadi’s release.

The Constitutional Court said the suspension was in effect pending a ruling on the legality of the treaty.

The Belgian government insists it is “doing everything possible” to get Vandecasteele released and says it has strengthened its legal team to plead the case.