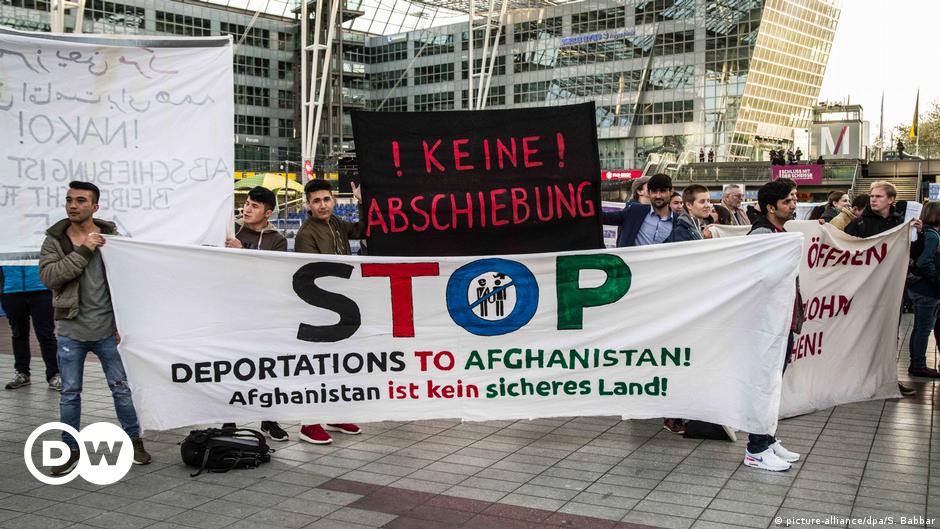 Protesters gathered at Terminal 5 at Berlin Airport on Wednesday to denounce a flight deporting asylum seekers whose claims were rejected to Afghanistan that evening. About 350 people showed up for the protest, surpassing estimates of 50 to 75 people.

Protesters carried signs calling on authorities to cancel the eviction flight, with some protesters blocking access roads to the airport. The protests were organized by the Brandenburg Refugee Council and ended after the plane left for Afghanistan.

Twenty Afghans later arrived in Kabul on the German flight Thursday morning. This is the 38th deportation flight to Afghanistan since December 2016, when the policy began, with a total of 1,035 failed Afghan asylum seekers having been returned.

Why are refugee rights groups calling for an end to deportations to Afghanistan?

The protests come as German refugee rights organization Pro Asyl this week called for an end to deportations to Afghanistan. The group cited the precarious security situation in Afghanistan, as well as the COVID-19 pandemic, as reasons why the evictions should stop.

Germany resumed deportations to Afghanistan in December last year, after being temporarily suspended in March 2020 amid the first wave of coronavirus cases.

Deportation flights to Afghanistan are a hot topic of debate among German political parties. Home Secretary Horst Seehofer, a member of the conservative Christian Social Union, has been a supporter of the evictions, while Green Party MP Claudia Roth called for an end to the practice due to the level of violence in Afghanistan .

Official data shows that the number of asylum seekers in Germany fell 30% in 2020 from the previous year, as the pandemic resulted in lockdowns and border closures. There were just over 76,000 first-time asylum claims last year, with the majority of asylum claims coming from Syrian, Iraqi and Afghan nationals.