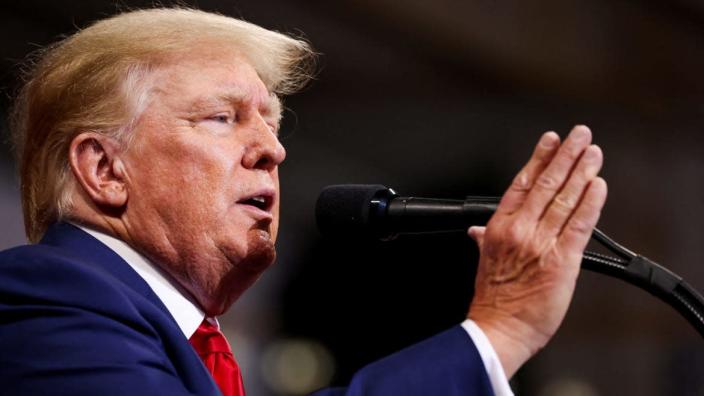 The increasingly caustic rhetoric directed at the FBI, IRS and other government agencies by former President Donald Trump and Republicans is putting ordinary workers “in grave danger and at risk of violence,” top Democrats on two congressional committees warn.

On Wednesday morning, the chairs of the House Oversight Committee and its National Security Subcommittee sent a stark letter to the law enforcement agency charged with protecting government personnel, asking what it is doing to counter the onslaught of threats from right-wing extremists and the MAGA. to grab. crowd.

“We are alarmed that Republican Party leaders have promoted false conspiracy theories and fueled violent threats against federal workers, endangering the lives of law enforcement and other patriotic officials,” it said.

The letter is signed by U.S. Rep. Carolyn B. Maloney (D-NY), who heads the Oversight Committee, and Rep. Stephen F. Lynch (D-MA), who chairs the National Security Subcommittee. It is addressed to the uniformed police department of the Department of Homeland Security, the Federal Protective Service.

Powerful Republicans have regularly appeared on TBEN News and other conservative news media for weeks to scare Americans that armed IRS agents are suddenly storming their homes, and they continue to claim that the Justice Department’s investigation into the former’s mishandling of classified information president is a political persecution that could spark a second civil war.

Meanwhile, Trump continues to fuel the fire by posting angrily on social media by directing anger at the FBI itself. His MAGA supporters make up the GOP’s most rambunctious contingent, and his movement serves as a Republican loyalty litmus test.

The letter cites nine examples, several of which are described as “demonizing federal law enforcement and even hinting at potential violence.”

Topping the list is Trump’s recent speech in which he called the DOJ and the FBI “cruel monsters” and warned of “a response like no one has ever seen before,” an ominous warning that parallels his comments before the January 6 uprising. which he helped fuel.

The letter also notes how Senator Lindsey Graham (R-SC) claimed on TBEN News that “riots in the streets” would ensue if the DOJ sued Trump for illegally holding Top Secret documents at his Mar-a-Lago estate. by the ocean. It notes that Rep. Paul Gosar (R-AZ) recently tweeted that “we must destroy the FBI”, and Congressman Jim Jordan (R-OH) tweeted that “if they can do it to a former president, imagine what they can do to you. “

“The commission is extremely concerned that this volatile threat environment puts federal employees at great risk and at risk of violence,” the letter warns the DHS Police Department. “We are also concerned that the funding available to the FPS for its research and facility security functions … may not be sufficient to address the current heightened threats against federal employees.”

Wednesday’s letter follows another Oversight Committee action by Maloney on Tuesday, when she disclosed a letter to the National Archives and Records Administration that revealed that archivists are still unsure whether they have recovered all of Trump’s presidential records — even after the FBI raid on Mar-à-Lago.

“This is important. The American people need to know that the nation’s secrets are safe,” the congressman told The Daily Beast. “We want to find the documents. We want to know if Mr. Trump knows where they are.”