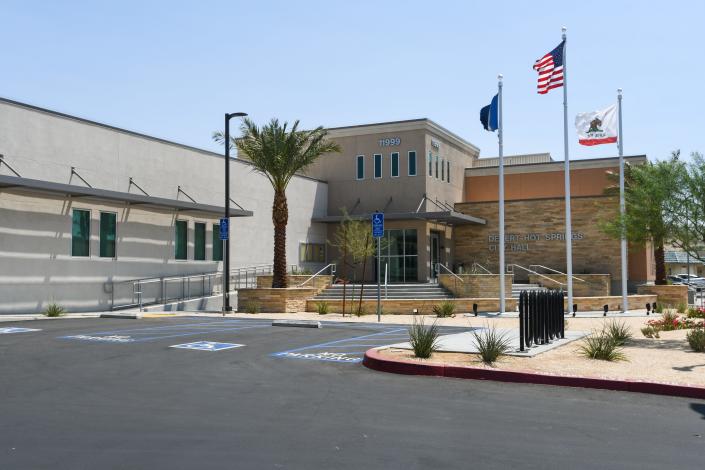 A Desert Hot Springs zoning commissioner was handed a three-year restraining order on Thursday after saying he was being threatened for refusing to license a massage therapy company.

The Planning Commission, in a public hearing on Aug. 23, unanimously denied a conditional use permit for JinDing Massage Spa due to past code violations committed by the company by installing an unlicensed business sign and operating without a business license. Planning Commission chairman Richard Duffle had filed the first motion to deny the permit.

James Cole, ex-husband of license applicant Zhan Lu, allegedly threatened Duffle by phone the next day for refusing Lu’s license. The City of Desert Hot Springs petition for a restraining order for workplace violence alleges that Cole told Duffle that Lu was hospitalized after losing $50,000 on her company and that he knows where the commissioner lives and works.

“I’m not in town right now, but if I was, I’d take care of you right now. I work with big companies like Walmart and Harbor Freight and I’m going to ruin you. And if I ever see you on the street, I’ll wipe the street with you,” Cole is said to have said, according to the petition.

Cole is said to have threatened Duffle again in a voicemail on August 26, after Duffle accidentally called his number while trying to block it and hung up. Later that same day, two of Duffle’s cars were broken into for the first time. This incident is under investigation.

The commissioner had reported Cole to the Desert Hot Springs Police Department after the initial incident and was later given a temporary restraining order before a hearing on the case was held on Thursday.

During the court hearing, Cole denied any physical threats and said his voicemail to Duffle repeated their initial call. The petition cites a voicemail recording, attributed to Cole, who said, “Look, you don’t want to mess with me, dude. You’re making a big mistake, okay? I’ll mess with you, okay? You’re a civil servant in a public place and you screwed my ex-wife.’

Duffle declined to comment after the hearing. The city also declined to make additional comments, citing the ongoing police investigation.

Desert Hot Springs would not confirm whether charges have been filed against Cole, but prison records show that he was arrested on Sept. 13 and is charged with making criminal threats, endangering violence and endangering children. The city’s petition for a restraining order for workplace violence states that Cole has already been charged with assault and willfully harming a child.

He paid $10,000 bail and will appear at the Larson Justice Center at 7:30 a.m. Dec. 8, according to prison records. The restraining order also prevents Cole from being near members of Duffle’s household. An exception to the order is that Cole may go to Desert Hot Springs City Hall on 24 hours’ notice, according to Commissioner Arthur C. Hester* III, who accompanied the hearing Thursday.

Cole declined to comment on the allegations on Monday.

*In an earlier version of this article, Commissioner Arthur C. Hester’s name was misspelled.