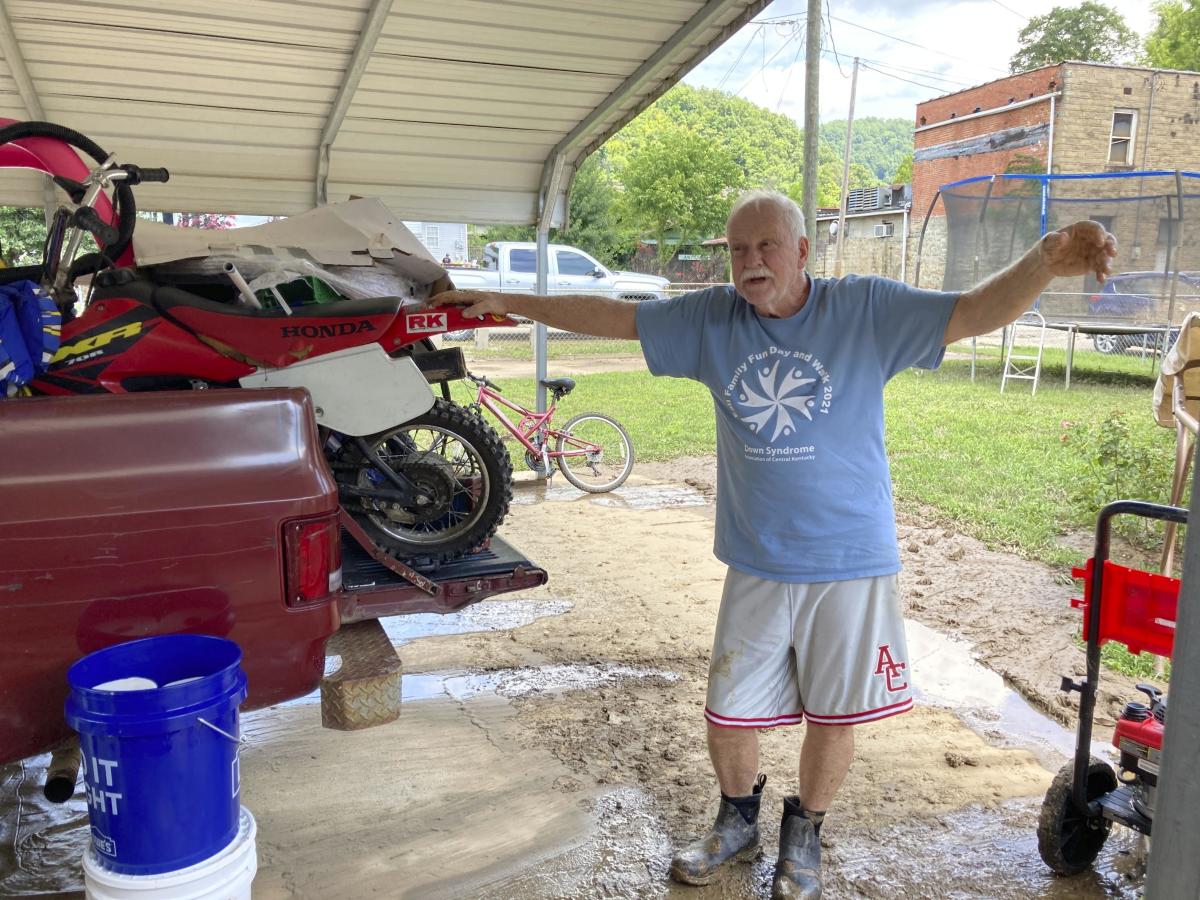 GARRETT, Ky. (TBEN) – This small sliver of town along a state highway in eastern Kentucky has been home to Brenda Francis and her husband, Paul for decades.

Paul Francis was born 73 years ago in this house, a yellow and brown single-storey house, which, like many other homes in Garrett, sits in a valley among high, wooded hills. The retired teacher loves it here and the couple received the house as a gift from his parents about 40 years ago.

But after another flood—this may be the worst they’ve ever seen—Brenda Francis said she was done. She joins many others in this corner of Appalachia who see this latest disaster as a devastating blow to their lifestyles. Some say they are considering moving, despite their deep roots.

Francis, 66, said her husband wants to stay: “But I don’t. I don’t want to live here anymore and he knows it. So we’re getting out of here.”

The Appalachians of Kentucky has seen hardships. The coal economy withered and took the high paying jobs with it. The opioid crisis flooded cities with millions of painkillers. The outlook was so bleak that many people left, causing a double-digit population decline in many provinces over the past two decades. In Floyd, Francis’s homeland, the population has declined by 15% since 2000. And annual household income in many of the counties hardest hit by last week’s floods is just over half the national average of about $65,000.

But many stayed here, held back by ties to their communities, families and their history. The floods that hit the area last week even got some of those staunch people thinking, especially in and around Garrett, a community of about 1,300 people founded by a coal company in the early 1900s.

The region’s strong social fabric and familial connections give a pause to people considering leaving home, said Ann Kingsolver, an Appalachian Studies professor at the University of Kentucky.

“Social capital is very important,” Kingsolver said in an email. “Those are the resources that people have from investing years in the social networks of relatives and neighbors — a kind of wealth that is beyond monetary value.”

When the 2008 financial crisis hit, she said, many young people moved back to rural Appalachia communities because they had a place to live and childcare.

Kingsolver said there is little available rental or motel space in those rural areas, but flood victims often receive help and shelter from nearby relatives and neighbors.

Pam Caudill lives on the same street as her son, who has been a big help since the floods reached 4 feet at her home in Wayland, just minutes from Garrett.

Her husband died of a heart attack in May and the floods have tested her determination to stay in her small town.

ALSO READ  GOP senator recognizes death of Jackie Walorski amid bill debate: 'Light up a room like no other'

“I’ve thought about it, but here’s the thing: It took everything me and my husband could do to buy a house,” she said, crying. “It’s hard to let go of something you’ve worked so hard for.”

So she and her son will instead look at what can be salvaged in her home and hope that the foundations remain solid.

“It was my husband’s house; it’s my kids’ house,” said Caudill, who moved temporarily to a shelter in a state park this weekend. “Wayland City has always been their home.”

Two miles outside of Garrett, 104-year-old Annis Clark was driving alone through the storm when she lost electricity and flooded her basement. She and her husband built their home in the ’50s, and she stayed long after he died in the ’80s, said her son, Michael Clark.

“She’s a survivor. I don’t know any other way to say it,” said Clark, who attended Garrett High School and then moved to Lexington, where he worked in television production and operations. “I have no doubt she’ll stay here until she’s done.”

Clark bought supplies for her Monday in nearby Prestonsburg. He graduated from high school in 1964 and said many of his classmates moved as he did to look for work. In many parts of eastern Kentucky, he said, “unless you wanted to become a miner, your options would usually be a teacher.”

In Garrett, Brenda Francis despaired at the inches of mud that had accumulated in the area below their home, which was thrown up after a flood in the 1950s, when her husband’s parents lived there.

“When you get older, you can’t clear all this. We’re just completely exhausted,” Francis said. “How do we get this mud out of here?”

Despite his wife’s frustrations, Paul Francis was gleefully clearing the family farm and piling up toys in a 1970s pickup truck that his father had bought brand new. He sloshed around in rubber boots and smiled as he prepared to plug in a pressure washer to clear mud from his grandchildren’s toys.

Their grandchildren are one of the reasons Brenda Francis wants to move to higher ground Prestonsburg, where the children live. She said like many in the city, they don’t have flood insurance for their home, but they do have a potential buyer. She hopes that the fact that the living areas of the house have remained dry will make it a sought-after home.

Her grown sons love the town of Garrett, but “they are all grown and now have their own families. They don’t want to come back here,” she said as her husband’s pressure washer hummed in the background.

“Who wants to come?” she said. “It’s still flooding here.”