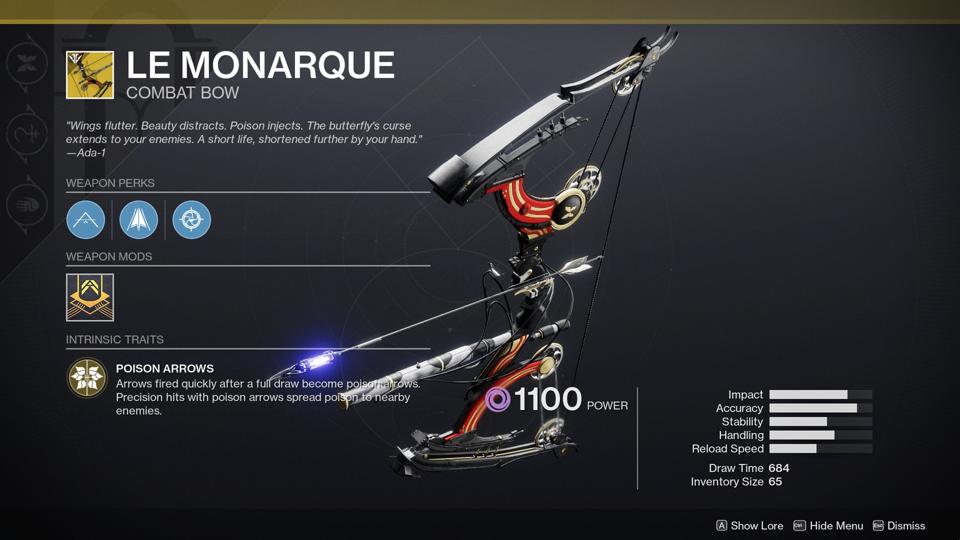 Alright, I’m using my power as a Destiny influencer to try to cope. Bungie, on this week’s TWAB, revealed a list of 12 Destiny 2 Exotics that they want fans to vote on, as they will be focusing on crafting new adornments for … early next year. In case you were wondering how long it takes to develop video games, here is your answer. Eight months for weapon ornaments. At least.

The list contains almost exclusively Destiny 2 vanilla weapons. Why? I’m guessing over the next year or so Bungie is already planning to release adornments for some of the new exotics, which is why some may be dropped from the list even though you might think they need better ones. ornaments. So we have a lot of old favorites left.

I’m here to try to rig the vote for my picks, so you can see if you agree with me:

*Crimson – Already owns one of the best adornments in the game, but Crimson is back in fashion in Crucible and I’d love to see him get another new adornment.

Fighting Lion – Fighting Lion has three ornaments but most of them are pretty bad so I understand why it’s here.

Graviton Lance – already has a few and they’re not the best, but I can’t put it as one of my top three here.

* The monarch – I want to say clearly it must be. The Monarch, although a popular choice in PvP and PvE content, has zero ornaments for it. Not that most bow ornaments are great, but every Exotic should have at least one, so this has to be the top 3.

Ruthless – I will agree that Merciless has two relatively bad adornments and yet I want to pick something that I actually use, and other than two weeks of a ruthless meta in D2 vanilla, that didn’t happen. Maybe if there was a PvE fusion buff next season?

* Riskrunner – I choose Riskrunner here even though it has three ornaments because I don’t like any of them, and I use Riskrunner all the time. I want something more elaborate than the ones they’ve done so far and if you want to give me something sick like a red lightning bolt I wouldn’t complain.

Skyburner’s Oath – Skyburner’s is back in favor of this Cabal-themed season this season and its shield piercing abilities. Not a ton of great adornments here, but I’m leaving it off my list.

Sunshot – I think Sunshot has some pretty cool adornments already so I think it’s okay.

Sweet Business – Sweet Business has my least favorite type of ornament, a gold skin, and yet I don’t use it enough to justify its selection.

Telesto – A useful pistol of course and one that I love, especially now that I have the catalyst, but it already has some great adornments.

Trinity Ghoul – A top tier crowd cleaner these days, but they just gave her a new ornament this season and I’m not sure what they can do here.

Wing of Vigilance – Another pistol with a lot of adornment already, I think it doesn’t need another compared to three of those others.

So these are my choices:

The Monarch, Riskrunner and Crimson, in this order.

You can vote for them here (or i guess those you want) and we’ll see what wins in a future TWAB and uh, buy them in February 2022 I guess. Game development! It’s hard!