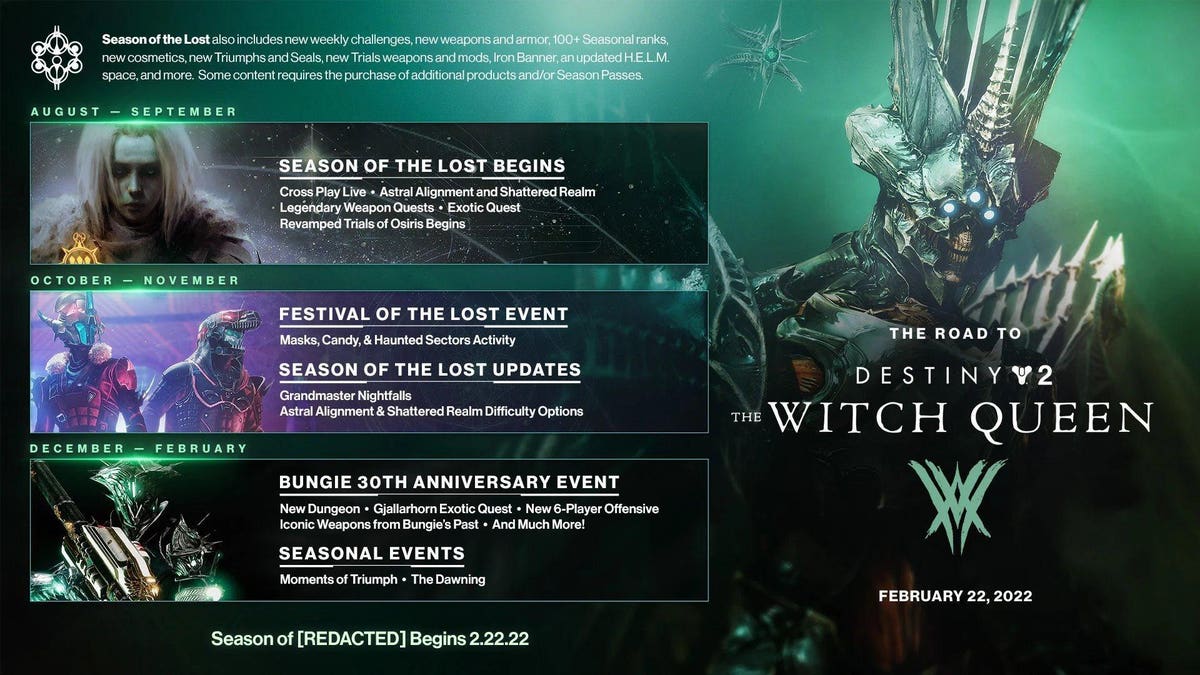 It’s been a long and quiet period of Destiny 2 lately, a lull in the six-month Season of the Lost as we gear up for Witch Queen, but the second half is about to kick off shortly after our season. back from Thanksgiving. Pause. About a week later, to be exact.

I thought I would do a reminder of what was to come, anchored mainly, of course, by the big 30th anniversary event. While we’re missing out on a lot of firm dates on top of that, here’s what we can look forward to:

This is divided into paid and free content, with the paid content being $ 25 or part of the plan $ 100. Here’s what we know about the split right now

Free stuff: A new, nine-themed six-player matchmaking activity, with its own rewards, possibly from Destiny 1. “Mysteries to Uncover,” where we don’t know what that means. “Rewards for commemorating our long and rich history together” which may include free Bungie-based items.

Paid items: Recover the cave dungeon with a set of thorn armor, Gjallarhorn and D1 weapons like Eyasluna and 1000 Yard Stare. Set of Bungie Street Clothing and Marathon Armor Ornaments. A Myth sword and a Marathon shotgun, possibly in the dungeon. A unique helmet ornament. Two exotic sparrows, a ship, emblems, shaders and emotes.

Remember that with the 30th anniversary patch also comes a massive balancing patch. All ability cooldowns are changed and rebalanced, as well as the damage for some of them. We’ve already heard of a number of upgrades and weapon nerfs. It’s unclear if anything changes with the mods or the exotic armor pieces, but it’s already a huge patch from what we’ve heard.

This will also mark the reset for granting each other 10-30 Transmog Synth Bounties, although we haven’t heard of any other possible mid-season updates alongside that.

Also in this patch? The Forsaken campaign is made free until The Witch Queen launches, so players who haven’t purchased this expansion can play it before it leaves.

While it’s possible this will launch the same week as the 30th anniversary, I’d be a little surprised. Last year it started in mid-December and lasted three weeks until early January, so maybe a week later, December 14 of this year.

Baking cookies and gifts will be back, but I wouldn’t expect a new activity. The Dawning never has one anyway (the most intense we had was the snowball strikes) and with the 30th anniversary activity there is no way. It is not known if we will be hosting another “Dawning Spirit” community event like last year.

We are in a curious position this year as Moments of Triumph is not happening simultaneously with Solstice of Heroes and has been pushed back to 2022 due to the long season. Generally speaking, this is just an objective “do things with past year’s content” checklist with rewards like sparrows or ghosts or a code for a Bungie t-shirt. . And of course, the MMXwhatever seal.

We made that special things happened last year, because before sunset all the raids allowed unlimited farming, so we’ll see if anything like that happens.

We’ve been putting the entire Season of the Lost story on hiatus since October, and with the 30th anniversary and holiday events, I’m guessing the week / endgame of the story won’t pick up until The Witch. Queen will hardly be on our doorstep. We’re going to exorcise Savathun’s worm and possibly kill her, but obviously we know what that will end up doing, as Savathun gains the light and retreats to his throne world for the events of The Witch Queen. But there are other lingering story threads, like what’s going on with Crow, and also Mithrax and Saint’s hunt for Osiris. I don’t know if this will be focused on a single week of revelations or spread out a bit over that period. But I don’t expect much from the Seasonal Stories Department until 2022.

Am I missing something? Let me know.