The unlikely meeting took place in preparation for the Mashujaa Day celebrations to be held in the county.

Kibicho revealed that the leaders discussed, among other things, unity and development in the county.

He also noted that leaders have pledged to have healthy competition in the 2022 gubernatorial election.

“We have made a wish list because the president will come here. All the aspirants, elders and incumbent leaders are here and we have vowed to keep the peace before and after Mashujaa day,” the PS said.

Waiguru noted that the meeting had been very productive, adding that it was refreshing to join other Kirinyaga leaders and the business community in a development-focused discussion.

She reiterated that issues affecting residents of Kirinyaga were at the center of the meeting.

For his part, Ngirici expressed the importance of having unity between the leaders despite their differences.

“This meeting was about the development of Kirinyaga and also about unity in the sense that all the leaders came together, which we should do even when we do not welcome the president,” Karua noted.

Waiguru is looking to defend his seat as governor in the 2022 polls, while Ngirici and Karua are considering the same.

PS Kibicho have yet to declare their interest in a county seat, but rumor has it that they are in the same race. 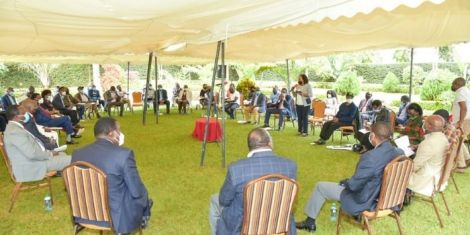