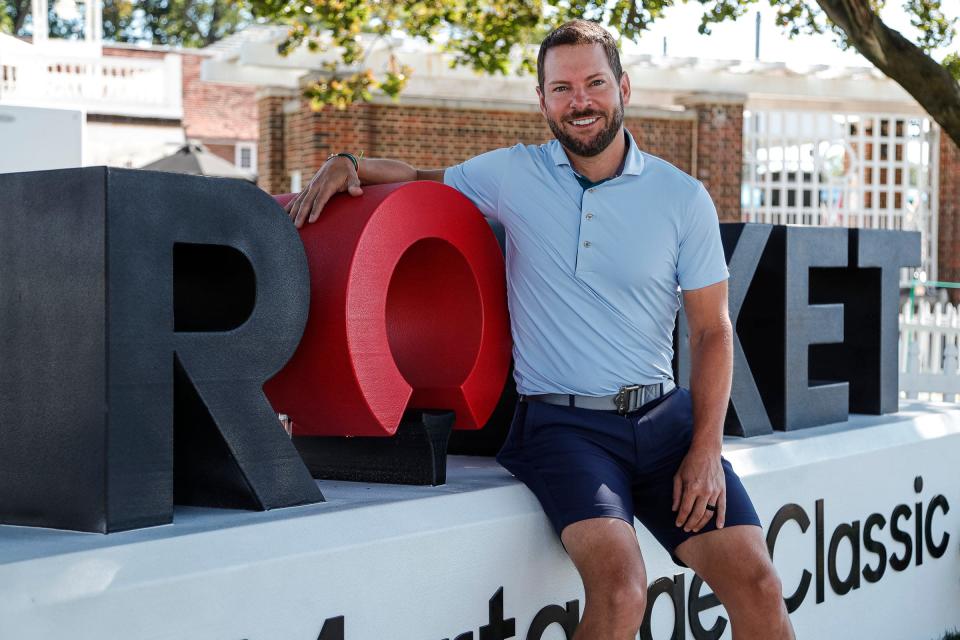 For the fourth year in a row, Detroit Golf Club has captured worldwide attention thanks to the Rocket Mortgage Classic.

Launched in 2019, the PGA Tour event now appears to be back in full swing after navigating the COVID-19 pandemic for the past two years. The work behind putting together the tournament has not been easy, especially as the golf world continues to move.

During the opening round of the RMC Thursday, former President Donald Trump expressed his support for Saudi Arabia-backed LIV Golf at the pro-am tournament at Trump’s golf club in New Jersey.

Trump arrives at the first tee and is greeted by Greg Norman at the start of the Pro-Am. At the LIV Pro-Am Tournament, former United States President Donald Trump and his son Eric played with Dustin Johnson and Bryson DeChambeau at Trump National in Bedminster, NJ on July 28, 2022.

Phil Mickelson, Patrick Reed and Dustin Johnson have all left the PGA Tour to join LIV Golf along with Bryson DeChambeau, the 2020 RMC Champion and former Rocket Mortgage Ambassador. But as LIV Golf grows, the Detroit Golf Club is razor sharp on making the RMC the best it can be.

“Needless to say, it’s interesting,” said club president Jason Drumheller. “You look at LIV Tour, and a lot of the guys who have been on the PGA Tour have gone there, and a lot of people have an opinion about it. I always think, ‘People do things for different reasons.’ The partnership we’ve had with the PGA Tour, the partnership we’ve had with Rocket Mortgage, it’s been great and successful. … When you see players (leave), especially players who would come here, you naturally think, ‘I hope the field still stays (strong) and gets better.’

Max Homa will make his first appearance during Round 1 of the Rocket Mortgage Classic at Detroit Golf Club in Detroit on Thursday, July 28, 2022.

Due to the uncertainties surrounding LIV Golf, Drumheller is curious to see how “everything will turn out” with it and the PGA. Either way, he’s more concerned with partnering with the tournament’s title sponsor to help Detroit prosper.

ALSO READ  Aside from a few slips, Darren Clarke is standing upright at Senior Open Championship

Drumheller, 40, is the youngest president in the club’s history, having started in 1899. He started working with the club in 2010 and has since held numerous titles within the organization. Drumheller said the DGC board is more like a ‘team’, and he believes… the people behind the scenes are the reason the club was able to host a fanless event in 2020 and get through 2021 with limited restrictions.

“I am proud to see the growth of the club,” said Drumheller. “From where we were to where we are now, I think we are one of the best clubs in the area.”

Drumheller said the DGC began setting up this year’s tournament on May 16. The 71 days of prep to PGA ready is the fastest turnaround on tour, Drumheller said.

Drumheller described the build process as “kind of a whirlwind,” but when tournament week finally arrives, it’ll be worth it. He even walked through the lane with some of his tournament participants on Wednesday when he caddy for his wife, WDIV-TV anchor Rhonda Walker, while she played in the pro-am.

Walker teamed up with pros Brendan Steele and Chad Ramey, and according to Drumheller she played “really well,” even though she’d brought “too much rain gear” and had “not-so-great reads” at times.

Kevin Kisner takes off at number 15 during Round 1 of the Rocket Mortgage Classic at Detroit Golf Club in Detroit on Thursday, July 28, 2022.

Anyway, Drumheller called the couple’s day at the pro-am a “special day.” He also says that the whole week in the RMC has also been special. A primary goal of the event in 2022 is to increase charitable contributions, which will exceed $5 million in the first three years.

“It’s hard to have a bad day at the DGC,” Drumheller said. “It gives our membership a lot of pride to host, and it’s not lost on us the impact of its charitable component. … Being based in Detroit, we want to make sure we can positively impact our city. I think the economic impact for the small businesses in our region is significant. Our membership aims to help and give back to the city we all love.”

Chandler Engelbrecht is a reporter at The Detroit Free Press and can be reached at [email protected] Follow him on Twitter @ctengelbrecht.