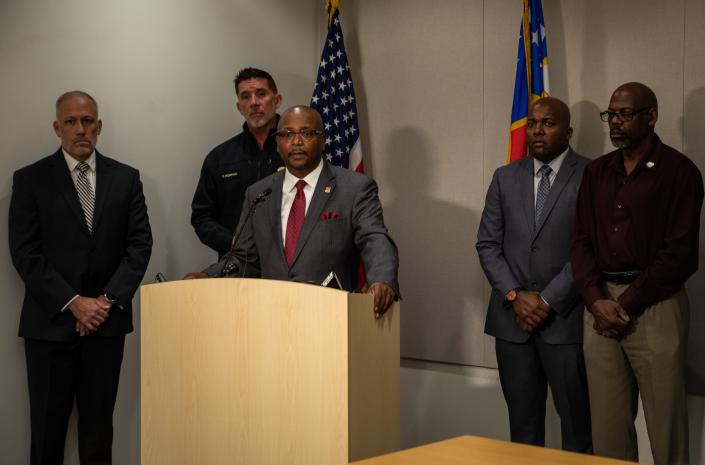 Detroit police shot and killed a woman who was going through a mental health crisis and who was accused of assaulting her child and her mother Thursday night at a home on the west side.

The woman and a Detroit police officer were engaged in a struggle over a gun when three other officers fired four shots at her at the home on the 15700 block of Meyers Road, Detroit Police Chief James White said at a news conference Friday morning. The woman did not fire the gun, he said.

“(What) we’re all going to try to understand and unpack with this investigation is what made the officers decide to go in, if it’s within our policy, if the fatal violence policy applies,” White said.

“And there will be strict accountability if the policy is violated.”

According to White, it was the woman’s mother and grandmother who called the police at 6:20 p.m. Thursday. They had gone to the house to see what the woman’s children, aged 7 and 1, were like.

There, the woman’s mother realized that her daughter was going through a mental health crisis and that the woman’s 7-year-old child had been hit on the head. The mother told police her daughter suffers from schizophrenia and, according to White, was armed with a bat, knives and had access to a handgun.

The second time the woman’s mother called, she asked police to come immediately because her daughter was pointing the gun at her, White said.

She then closed the door, White said, and got excited when officers began to surround the house. Finally, she opened the door again and officers were able to enter the house.

White said the woman ran to a gun and grabbed the gun. Then an officer tried to wrestle the gun away from her, and during the struggle, three other officers fired, White said.

“As she runs away, you can hear the officer yelling, ‘Don’t pick up that gun, don’t pick up the gun. Pistol, rifle pistol. Then there’s a struggle and then you hear the shots go off,’ White told the news conference.

White said the children were upstairs in a bedroom when the struggle took place.

White initially told the public Thursday night, while stressing that the information was preliminary at the time, that police had classified the scene as a barricaded gunman incident. White said Thursday that they did not, in fact, treat the situation as such due to the fact that the woman’s two children were in the house.

“When children are at risk, decisions to protect them are our top priority,” he said. “We want to be transparent with the community.”

White said body camera images are being reviewed but will not be released to the public immediately.

The three officers who shot the woman have been placed on paid administrative leave per department policy.

More:What to do in a mental health crisis: tips for families

The murder comes just over a month after Detroit police shot and killed 20-year-old Porter Burks, who had been diagnosed with schizophrenia. Burks’ brother had called the police and informed them that Burks was going through a mental health crisis and was wandering the west side of town near their home with a 3.5-inch knife.

Burks was shot 19 times by five officers, who fired 38 rounds in three seconds. Burks’ mother has filed a $50 million wrongful death lawsuit. Community members have questioned police crisis intervention training and demanded the names of the officers who shot Burks. White said his department will release names once the investigation is complete.

Activist Kate Stenvig of the group By Any Means Necessary expressed her outrage at the latest incident of a mental health crisis that ended in death.

“We no longer need crocodile tears from Chief White or anyone else when these were preventable deaths, and police policy is clearly to shoot to kill,” Stenvig said Friday. “We are going to march tomorrow at 4 pm and invite everyone to join us.”

A rally organized by several social justice groups calling for better crisis response is scheduled for Saturday at 3 p.m. at the Adams Butzel Complex, 10500 Lyndon St. in Detroit.

Andrea Sahouri handles criminal justice for the Detroit Free Press. You can contact her at 313-264-0442, [email protected] or on Twitter @andreamsahouri.