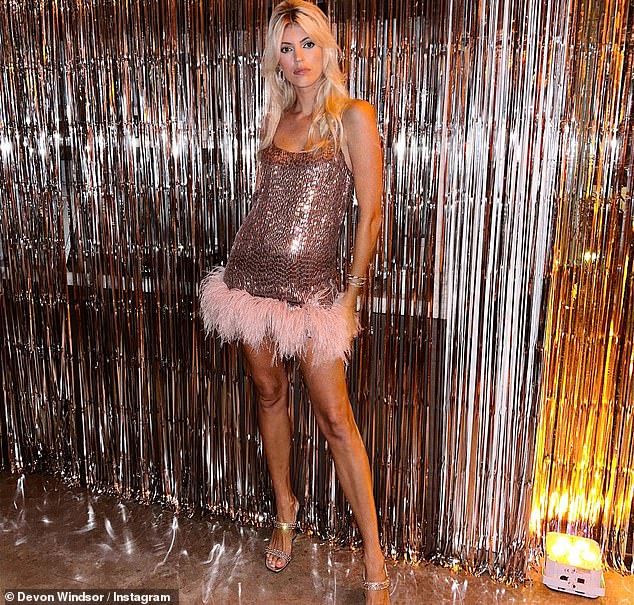 Devon Windsor made more than one fashion statement over the busy weekend and shone in a sparkly dress as she attended her sister’s 30th birthday party on Saturday night.

The model turned entrepreneur, 28, shared an assortment of photos that captured special moments from the disco-themed extravaganza.

Later on Sunday, the mum enjoyed a relaxing ‘boat day’ on the water, showing off her toned, post-baby body in a vibrant yellow bikini from her own swimwear brand.

Fun Evening: Devon Windsor, 28, stunned in a dazzling feather-hemmed mini dress as she celebrated her sister’s 30th birthday on Saturday

The fashion model, who currently has 4 million followers on Instagram, uploaded several photos on her main page that captured sweet memories of her sister, Alexandra Windsor’s birthday party.

The party was themed to Studio 54, but was referred to as Studio 30, referring to her sister’s age.

Silver streamers and disco balls were decorated around the large space as guests danced the night away.

Devon wore a rose gold mini dress with sequins and thin straps that showed off her long, tight legs. The hem of the ensemble was covered with pink, airy material. 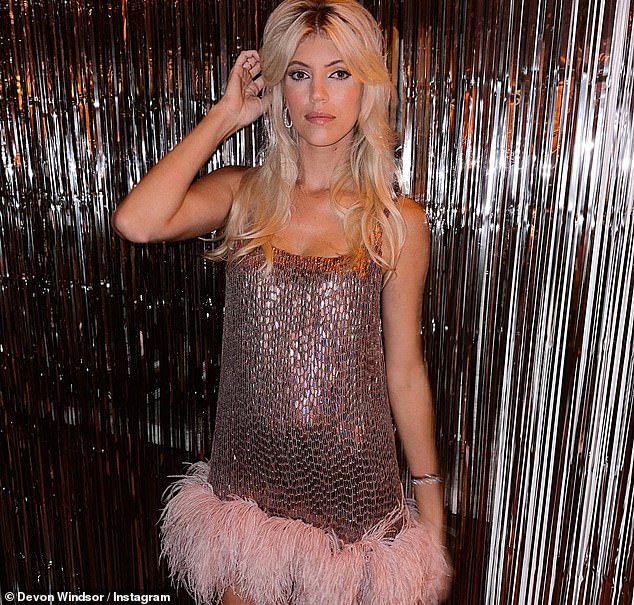 Throwback to disco days: The theme of the party was Studio 54, but was called Studio 30 in honor of her older sister’s age 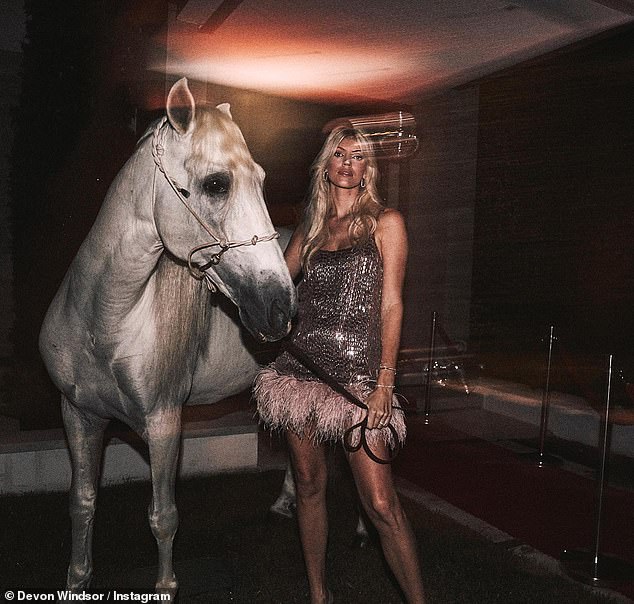 Famous photo re-creation: A white horse was seen at the party, possibly in reference to the famous photo of Bianca Jagger sitting on a white horse in Studio 54 on her birthday in 1977

Devon’s voluminous blonde hair was parted in the center and fell in light curls down her shoulders, while her bangs ran down the sides of her face.

ALSO READ  Sienna Miller, 40, looks smitten as her beau Oli Green, 25, plants a kiss on her hand for NBA date

To spice up her look, the former Victoria’s Secret model added a pair of sparkly dangling earrings.

She donned a pair of silver strappy heels to complete her overall ensemble for the eventful evening.

A few photos she shared showed Devon posing next to a horse, possibly in reference to the famous photo of Bianca Jagger sitting on a white horse at Studio 54 on her birthday in 1977. 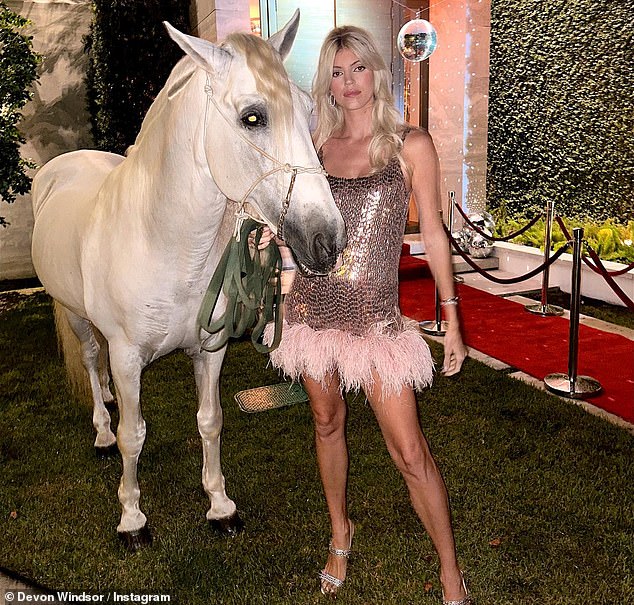 Theme: Guests at the party were decked out in their own disco-inspired fashion as they celebrated Alexandra’s birthday 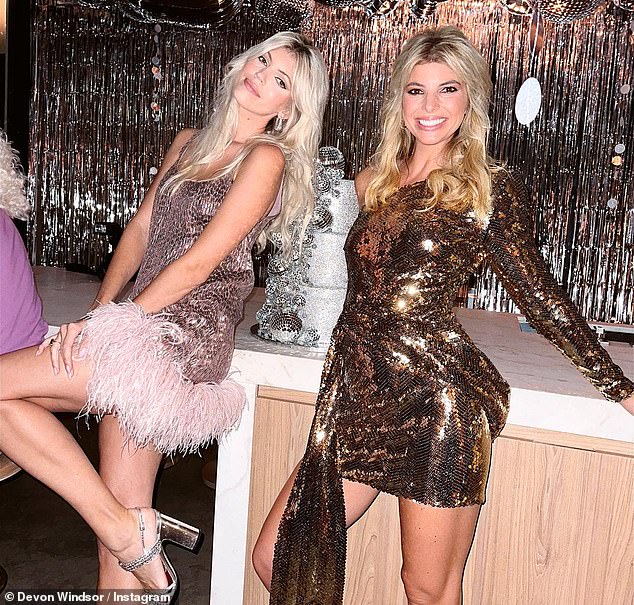 Stylish duo: Devon made sure to take a picture with the birthday boy in the evening, who opted for a gold sequin ensemble 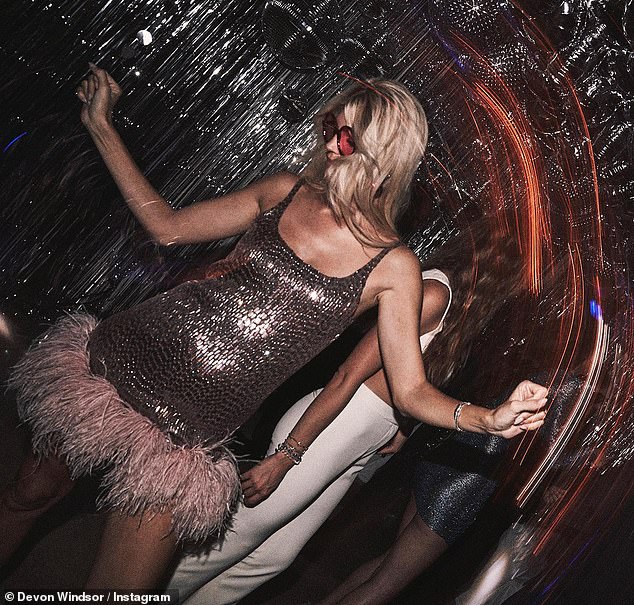 Dancing all night: the mother of one could be seen doing some of her dance moves

Devon shared extra snaps of herself showing off some of her favorite dance moves.

She was seen on the dance floor with some friends, along with her husband, Jonathan Barbara.

The two lovebirds tied the knot in 2019 during a romantic ceremony on the island of Saint Barthélemy, also known as Saint Barts.

During the birthday festivities, Devon donned large round pink sunglasses and also added a bright pink wig to partially cover her blonde locks. 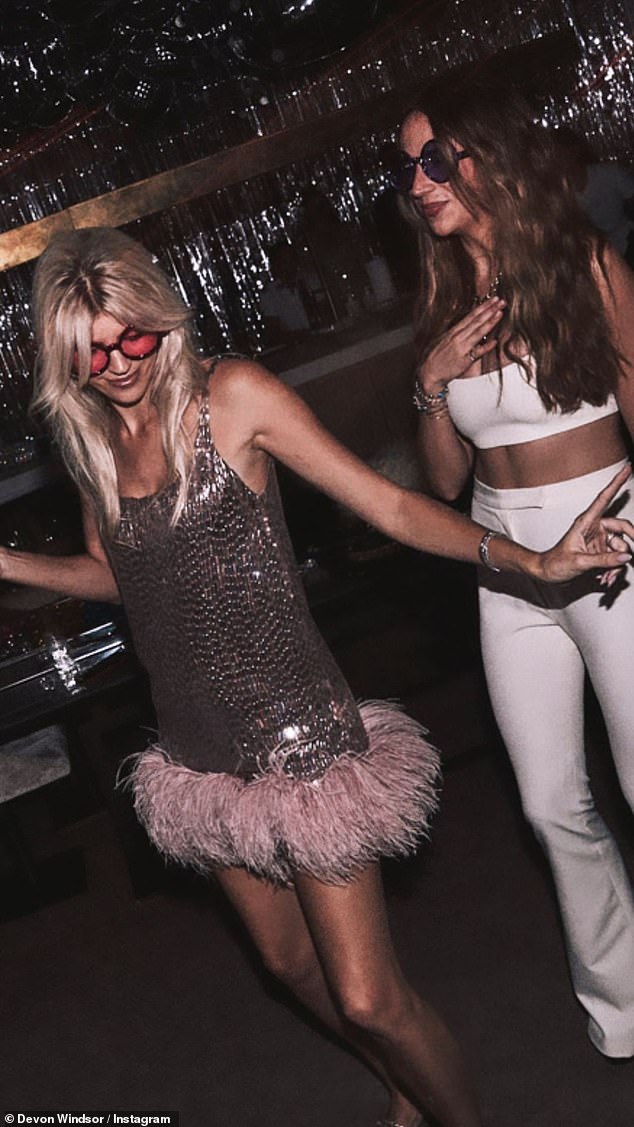 Spending time with friends: The former Victoria’s Secret model was seen dancing next to a friend on the dance floor 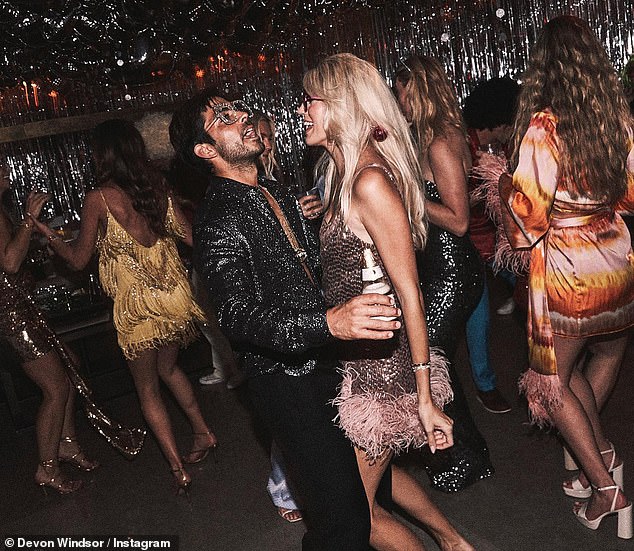 Adorable: Devon was seen dancing with her husband, Jonathan Barbara. The happy couple tied the knot in a romantic ceremony in 2019 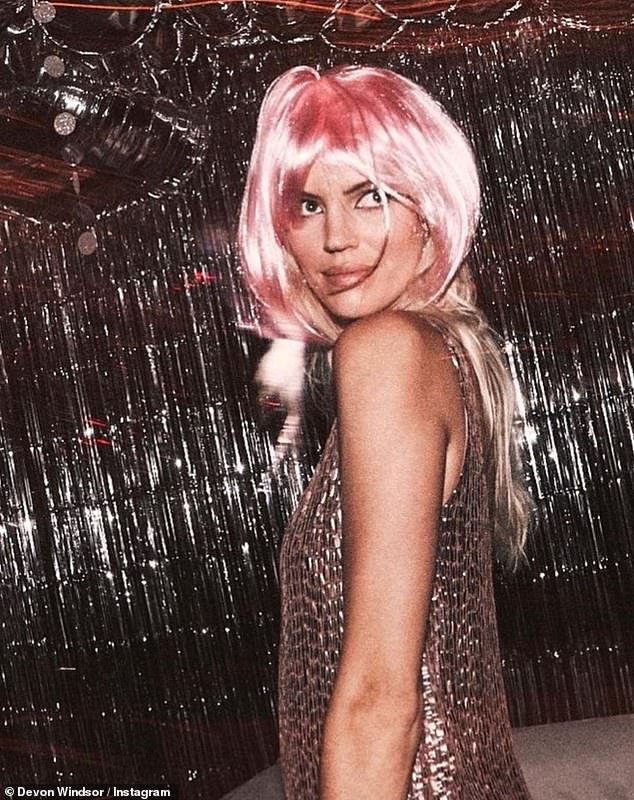 Dress up: At the party, the beauty wore a bright pink wig to cover her blonde locks 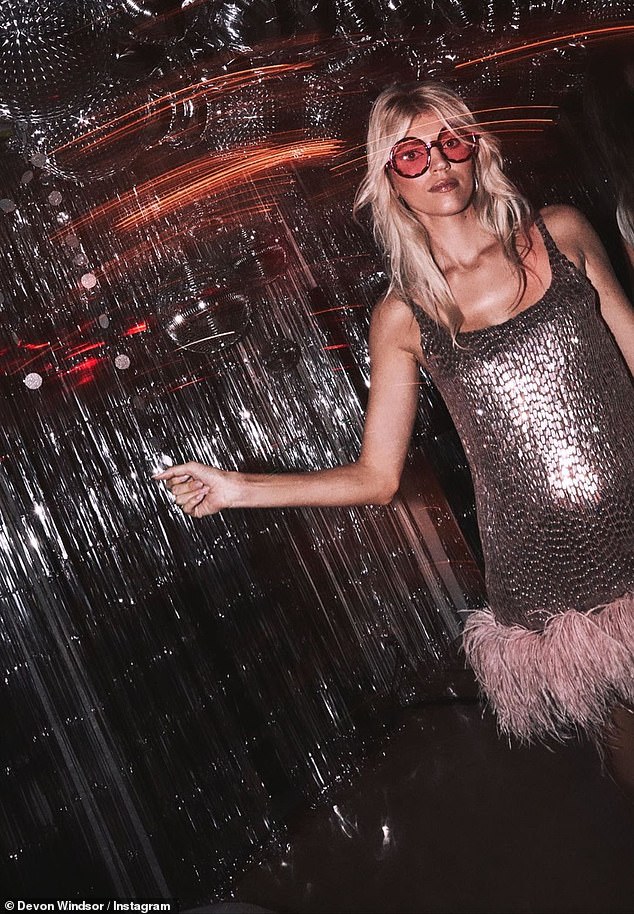 Other accessories: For an extra pop of color to her look, Devon threw on some big, round shades of pink

Just as the party started, Devon was pictured carrying a glittering three-tiered cake to her sister, Alexandra.

Mini silver disco balls were placed on each layer of the cake, along with long, round candles.

Later in the evening, the star took a photo next to her father, Charles Windsor, who was also dressed in 70s attire.

‘STUDiO 54’, she had typed in the caption of the striking photo series, ‘aka studio 30’.

The businesswoman also shared a reel with her fans and followers and gave a behind-the-scenes look at her ensemble.

As she filmed herself, Devon could be heard lip-syncing to the audio saying, “I’m sorry. I only need one minute to make sure I look good. Do you think I look good, Mr. Armstrong?’ The audio is part of a song titled Splish Splash by DreamDoll. 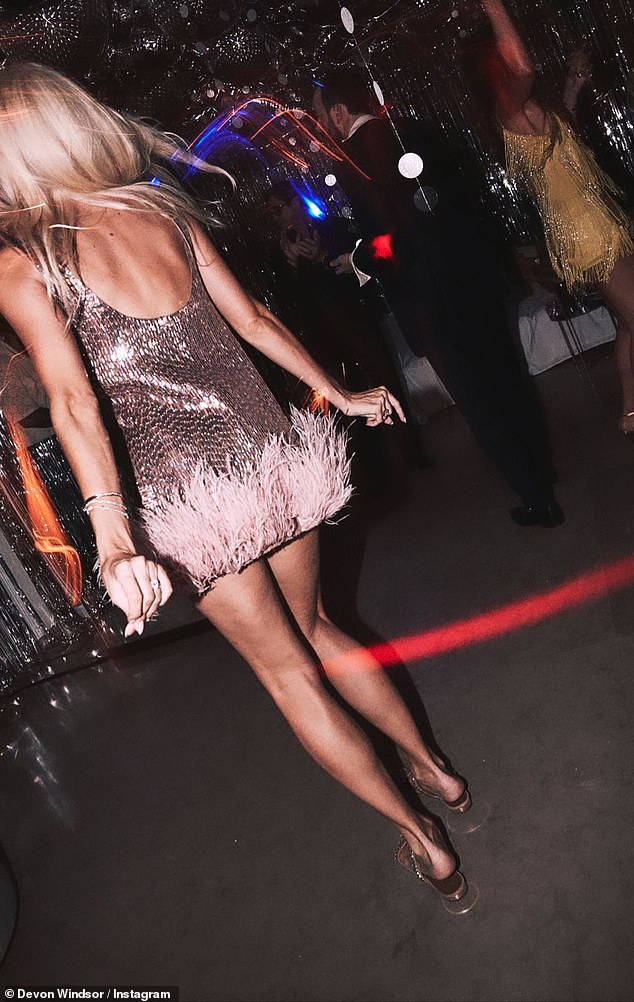 Shoe Change: As the night grew later, Devon chose to wear flats while she kept dancing 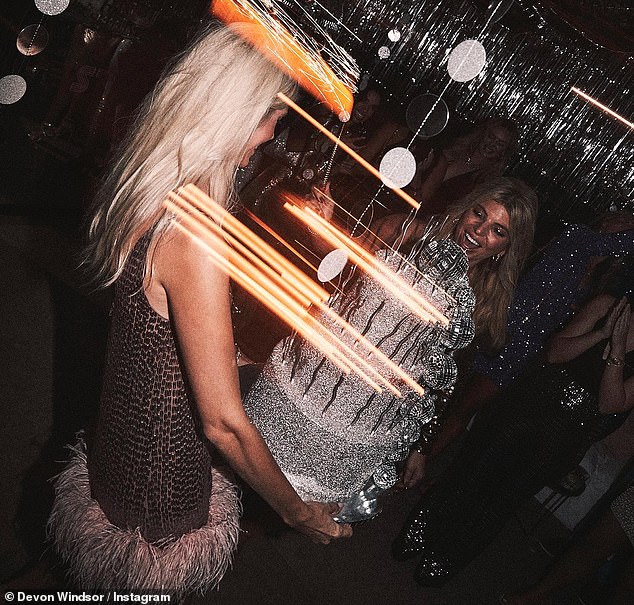 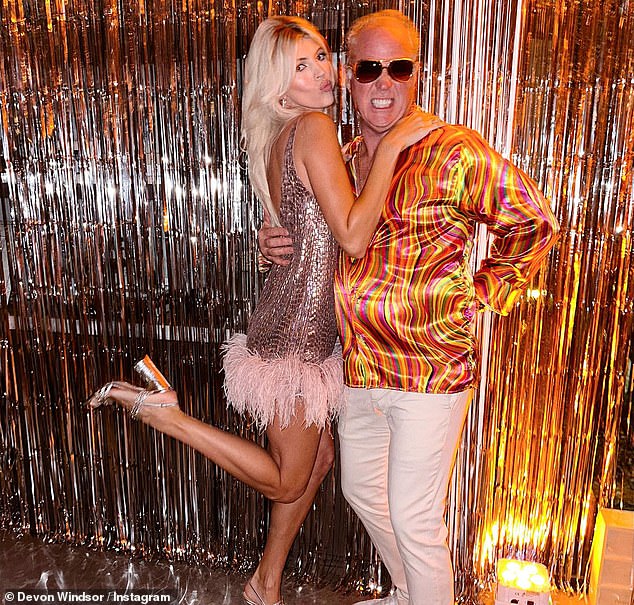 Family time: The talented model posed for a photo next to her father, Charles Windsor, who was also decked out in disco themed clothing for the celebration 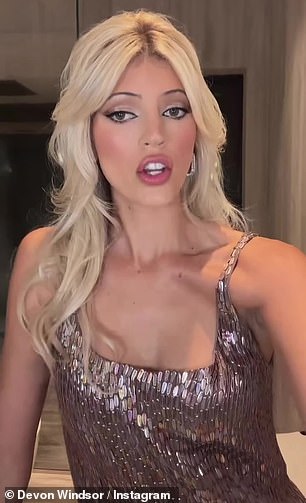 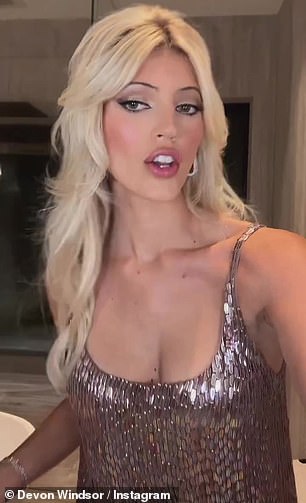 New Reel: Devon also shared a reel to give a behind-the-scenes look at her sequin ensemble and lip-synced to audio of a song called DreamDoll’s Splish Splash

ALSO READ  The Block 2022: Sad reason why fans had questions about 'Mr Lambo' 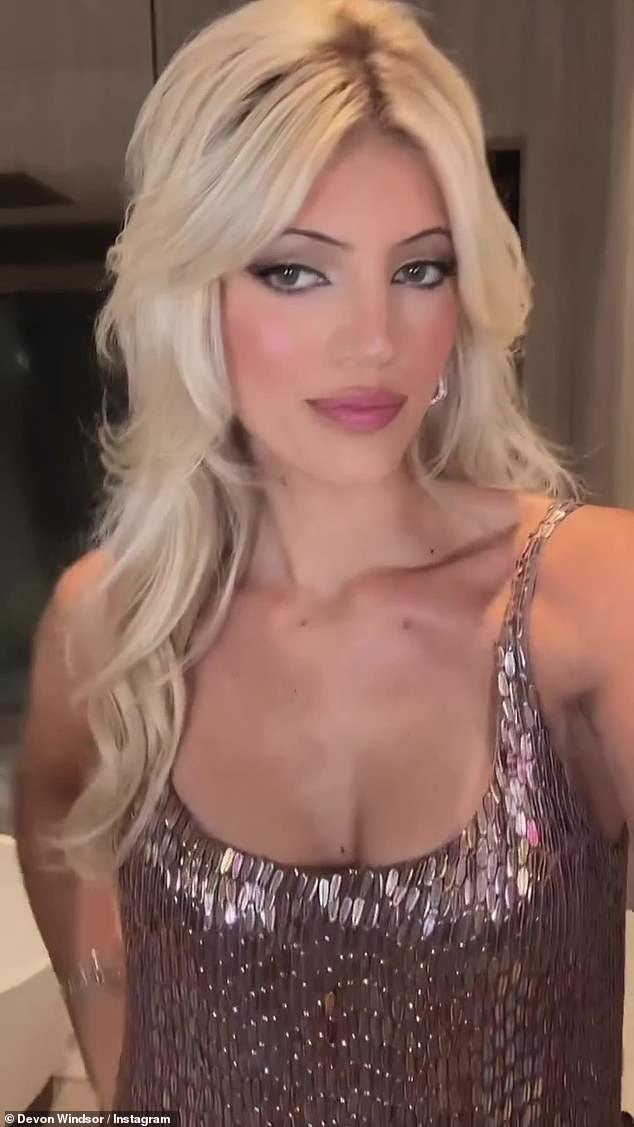 Beautiful: In the post’s caption, the talented businesswoman wrote: ‘Entering the disco era’

She also added a short caption to the supplementary post, writing to her fans: “Entering the disco era.”

After expending all her energy and dancing into the wee hours, Devon enjoyed a peaceful and relaxing ‘boat day’ on the water earlier Sunday.

The star uploaded a clip to her Instagram story showing off her outfit for the day. She explained that she was wearing a Katalina dress from her own swimwear brand that was named after herself.

The knitted mini dress, with a short, pointed collar and a deep V-cut, will be available from November 16. 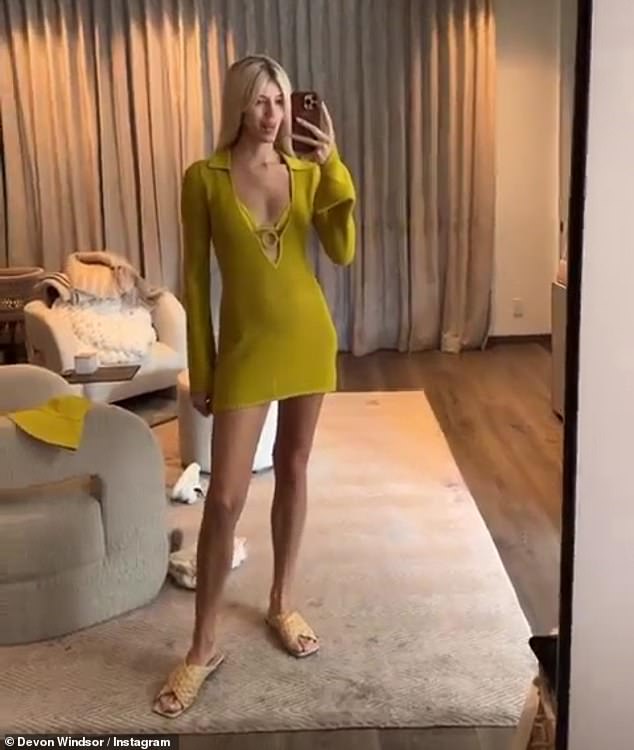 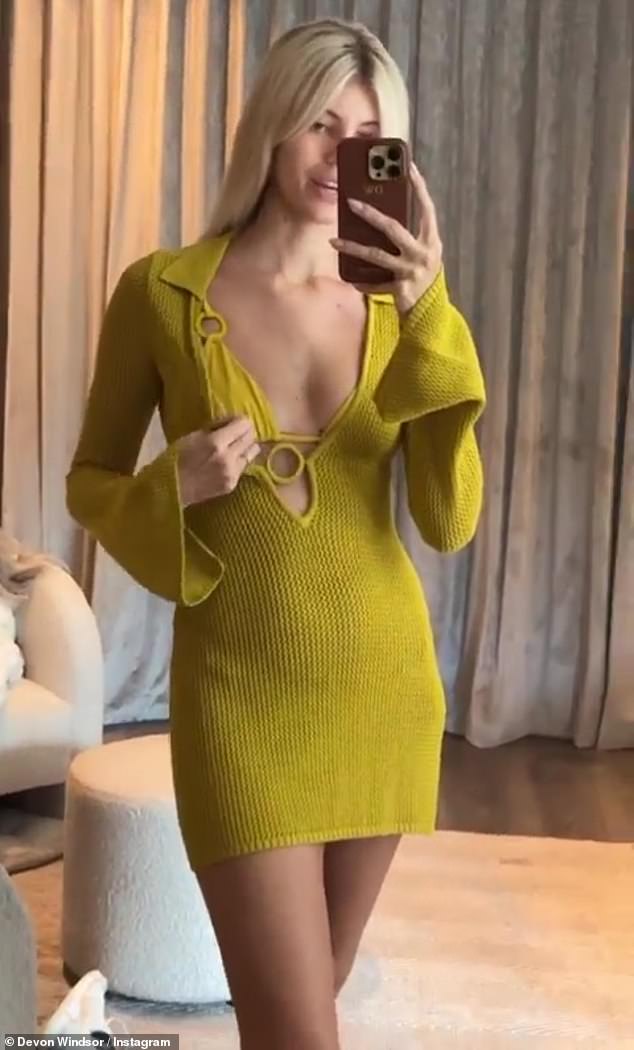 Video selfie: During the clip she shared on her Instagram story, the mom of one showed off the lemon bikini and matching knit dress she chose to wear for a day on the water 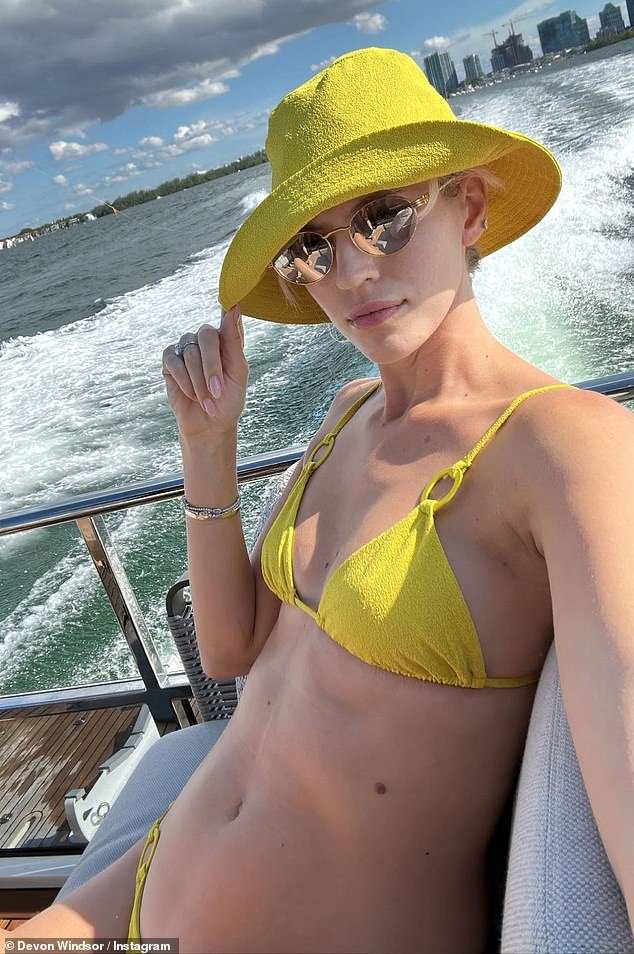 ‘Boat Day’: Devon uploaded a quick selfie she took while lazing on a boat under the sun

The lemon colored dress matches the Amina and Alaya bikini set she also donned for a day out by the water.

The bikini top, which features curvy details, costs $90, and the matching bottom can be purchased for $85, according to the brand’s official website.

Devon shared another photo lounging on the boat under the blazing sun, taking a closer look at the details of the swimsuit and matching sun hat.