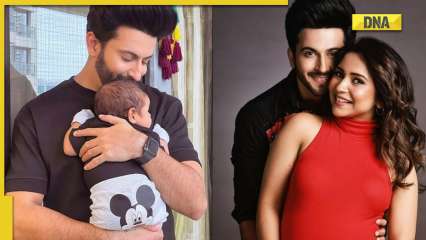 Famous television actors Dheeraj Dhoopar and Vinny Arora were blessed with a baby boy on August 10, and a month later, the couple decided to reveal the name of their first child on Sunday, September 11. Dheeraj took to his Instagram account and posted an adorable photo with his son and along with the same, wrote that they named their son Zayn.

The photo showed Dheeraj wearing a casual black T-shirt while his little munchkin was wearing a Micky Mouse onesie. Along with this adorable photo, the Kundali Bhagya actor wrote: “He’s got my dimples and all my heart…I’ve never met anyone so beautiful, so we named him Zayn” and added a red heart amoji .

Vinny Arora, who fell in love with Dheeraj on the sets of their Colors TV show Mata Pitah Ke Charnon Mein Swarg in 2009 and married him in 2016, took to the comment section, writing: “Have so much love for you guys, my heart would explode. Besides, he’s got my nose”.

On August 10, Dheeraj and Vinny shared a photo of a blue themed dreamland with a toy airplane with a note that read, “We are overjoyed to announce the arrival of our Baby Boy! 10-08-2022. Proud Parents, Vinny & Dheeraj” with the title “It’s a BOY”. Their Instagram post immediately went viral.

Meanwhile, at work, Dheeraj participates in the ongoing season of the dance-based reality show Jhalak Dikhhla Jaa Season 10, judged by Karan Johar, Nora Fatehi and Madhuri Dixit. He is paired with choreographer Sneha Singh in the Colors TV show which premiered on September 3. Apart from Dheeraj, the show features popular celebrities such as Nia Sharma, Rubina Dilaik, Ali Asgar, Faisal Shaikh, Shilpa Shinde, Paras Kalnawat and Amruta. Khanvilkar among others.