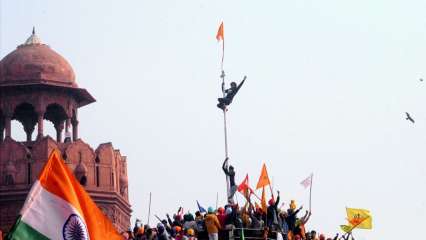 On Republic Day, Delhi witnessed violence after farmers smashed police barricades in several areas and stormed the Red Fort, hoisting their own flags on the ramparts and raising slogans.

Meanwhile, some social media posts claimed the protesters had raised the Khalistani flag, after which social media was inundated with hate messages and outrageous comments. Some posts claimed that the tricolor had been removed and that farmers had hoisted their own flag in place of the national flag.

ALSO READ  Polio vaccination campaign: more than 3 million children to be vaccinated in this state today

However, farmer leaders made it clear that no Khalistani flags were waved at the iconic Red Fort. Protesters carried a Sikh flag called “Nishan Sahib” which is found in every Gurdwara and the same is invariably carried during religious processions.

Several users on social networks said that the national tricolor flag hoisted at the highest pole of the red fort had remained intact.

What is “Nishan Sahib”?

The flag waved at the protest is known as the “Nishan Sahib”, also known as the “Sikh flag”. The flag emblem has a blue Sikh insignia, called “Khanda”, in the middle. The badge consists of a two-edged sword, a chakra, a disc and two kirpans intersecting at the hilt.

The emblem on the flag was introduced by the tenth Sikh ruler Guru Govind Singh. The flag represents truth, unity, bravery and pride.

The incident shook the whole nation, large numbers of protesters were implicated in the unruly act. They were seen attacking police officers and vandalizing buses, prompting cops to use tear gas and lathi charges to disperse them. By nightfall, the Red Fort was secured, flags removed, and protesters were forced to vacate the scene.

‘Free the temples from government control and hand them over to the faithful’: Sadhguru appeals to TN political parties

“Not a dissident meeting”: Veerappa Moily On Jammu Meet from Congress

The Bharat Express News - March 2, 2021 0
The federal government of Nigeria has blocked Radio Biafra in Lagos. The National Broadcasting Commission (NBC) made the announcement on Monday evening. NBC said it intercepted...