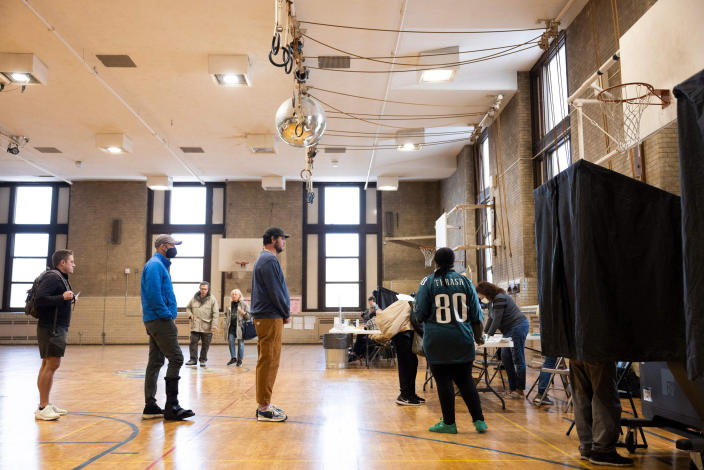 WASHINGTON – How did the Democrats stop a red wave in 2022?

The short answer: Donald Trump seems to have helped them.

In a big departure from past trends, the 2022 midterm elections turned out to be almost as much a referendum on the defeated former president as it is on incumbent President Joe Biden, according to exit polls conducted by Edison Research for NBC News and other networks. .

Trump loomed large in the minds of voters, dragging his party’s candidates down — nationally and in key swing states with Senate races — despite having no power. In many cases, that dampened the impact of Biden’s unpopularity and widespread economic pain, allowing Democrats to defy political gravity and hold their own.

Nationwide, in 2022, 32% of voters said their vote was “against Joe Biden.” But 28% said their vote was “against Donald Trump” even though Trump was not in office. That suggests that Trump’s continued dominance over the GOP made the 2022 election in voters’ minds almost as much about a defeated former president as it was about the current president and the party in power.

“It was a Trump problem,” a Republican agent involved in the 2022 election told NBC News, speaking candidly about the GOP’s de facto leader on condition of anonymity to avoid retaliation. “Independents did not vote for candidates they considered extreme and too closely associated with Donald J. Trump.”

Independent voters made up 31% of the electorate and they preferred Democrats to Republicans by a margin of 49% to 47%, a marked break from the past four midterm elections in which they voted in double digits for the party that was out of power. , according to exit polls.

Negative views on Biden did not correlate with voting for GOP. The 10% of voters who said they “somewhat disapproved of” Biden narrowly broke for Democrats over Republicans, 49% to 45%.

Overall, Biden’s job approval rating, which was 44% positive and 55% negative, was better than Trump’s in 2022, 39% favorable and 58% unfavorable, the exit polls found. Of the 58% who had an unfavorable view of Trump, 77% supported Democrats, while 20% voted for GOP candidates.

“The former president cast a very long shadow over this election,” said Ken Spain, a former Republican campaign strategist. “From the candidates he supported to his refusal to take himself off the national stage in the run-up to the election, Trump was ubiquitous.”

ALSO READ  At Protests, Guns Are Doing the Talking

In Arizona, Trump’s favorable assessment was 42% positive and 57% negative; among those who viewed Trump negatively, 84% supported Democratic Senator Mark Kelly, who is projected by NBC News to win the race. Meanwhile, 38% said their vote was “against Joe Biden,” and they voted 95% to 2% for Republican Blake Masters. But 35% said their motivation to vote was “against Donald Trump,” and they voted 96% to 1% for Kelly.

In Pennsylvania, Trump’s favorable assessment was 40% positive and 58% negative. Again, Trump’s opinions correlated with whether they supported his backed Republican candidate, Mehmet Oz, who lost to Democrat John Fetterman. About 30% of Pennsylvania residents said their vote was against Biden, while 26% said their vote was against Trump. Only 6% of Biden 2020 voters supported Oz, while 8% of Trump 2020 voters supported Democrat John Fetterman.

Trump Responds to His Critics

Since the election, Trump has spread baseless claims about a corrupt voter count in Pennsylvania and a “spoiled” election in Arizona — claims that Oz and Masters have failed to repeat. He has also complained that he is not getting enough “congratulations or praise” for the Republican candidates who did win.

“It’s Mitch McConnell’s fault. Spending money to defeat major Republican candidates instead of supporting Blake Masters and others was a big mistake,” Trump said in a social media post on Sunday, attacking the GOP Senate minority leader for supporting the infrastructure bill. “He blew the Midterms, and everyone despised him.”

NBC News exit polls show that Americans’ 2022 votes were closely linked to their party preference for 2020, unlike previous midterms in which many swing voters who supported the president switched to the opposition party. In addition, democratic enthusiasm was relatively high, partly due to the decision of the Supreme Court to abolish the constitutional right to abortion in June.

Not all Republicans blame Trump for the losses. Senate GOP campaign chairman Rick Scott said Friday night that 2022 was a “complete disappointment” because voters were not inspired by his party.

“I don’t think we had enough positive messages,” Scott told TBEN News. “We’ve said all about how bad the Biden agenda was — it’s bad, the Democrats are radical. But we need to have a plan for what we stand for.”

In August, Senate Minority Leader Mitch McConnell warned that Republicans may not get the only seat they needed to secure the majority, citing “candidate quality” as a factor. His efforts to make his party an acceptable alternative to voters concerned about rising costs and crime seem to have failed.

“The Republicans failed to turn this into a referendum campaign. Ultimately, the midterm elections became a choice between an unpopular president and an even more unpopular Trump,” Spain said. “The candidates who underperformed in battlefield states and districts had one thing in common: Trump’s endorsement.”