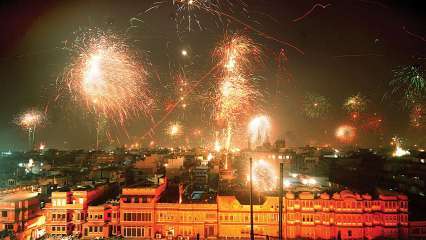 The bursting and sale of firecrackers has always been a subject of debate as the Diwali season approaches. Many believe that the use of firecrackers during the current COVID-19 pandemic situation is not favorable as it will have other adverse effects on our immunity.

Not only that, but places like Delhi and Mumbai already have a deteriorating air quality index during the winter season, and some believe that cracker bursts may make metropolitan cities’ air pollution quotient even worse. populated.

Delhi’s pollution control committee earlier this year banned the bursting of crackers in the nation’s capital until Jan. 1, 2022. In his official memo, he wrote that in view of the need, in l public interest to reduce high air pollution. in Delhi, a “total ban” was imposed on firecrackers.

The government of Rajasthan has decided to ban the sale and use of firecrackers from October 1 of this year, given the harmful effects of smoke as the threat of the third wave of COVID-19 still looms. The state government further authorized the use and sale of green crackers across the state this Diwali.

The state government has banned the storage, distribution, sale, use and manufacture of attached firecrackers throughout the Punjab. The use and sale of green crackers has been authorized by the government for festivals. People will only be allowed to pop cookies on Diwali from 8 p.m. to 10 p.m. in the state.

The sale and use of firecrackers has been banned in West Bengal due to air pollution. Citizens will be allowed to pop green crackers on Diwali and Chhath Puja this year, for a two-hour period designated by the authorities, from 8 p.m. to 10 p.m. and from 6 p.m. to 8 p.m. respectively.

Several other states such as Bihar and Uttar Pradesh have banned the sale and use of firecrackers in certain neighborhoods during the festival period. The Chhattisgarh government has designated a specific time when people can pop crackers. The Maharashtra government has not banned the use of crackers but has asked citizens to refrain from popping them this year.