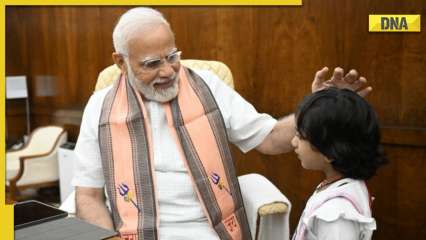 Prime Minister Modi asked Anil Firozia’s daughter, little Aahana Firozia, if she knew who he was. “Yes, you are Modi ji. I know you and I see you on TV!” the child replied. “And you work for Lok Sabha TV (Lok Sabha TV mein naukari karte ho),” the child told the Prime Minister.

READ | Railways may introduce ‘Premium Tatkal’ on all trains

Everyone in the room was delighted after seeing the fun interaction. She was given chocolates by Prime Minister Modi so that she would not return empty-handed. The Prime Minister has been spotted on a number of interesting occasions in the past having fun with children.

First MP Anil Firozia significantly reduced his weight with the encouragement of Nitin Gadkari. The MP received a guarantee of Rs 1,000 crore for his district for every kilo lost. Firozia claims his constituency will receive Rs 21,000 crore as he has lost 21 kilograms.

ALSO READ  Chennai man dies in AC blast: what to do to avoid air conditioner explosion?

The Bharat Express News - August 8, 2022 0
A ceasefire between Israel and Palestinian militants came into effect late Sunday in an effort to end nearly...