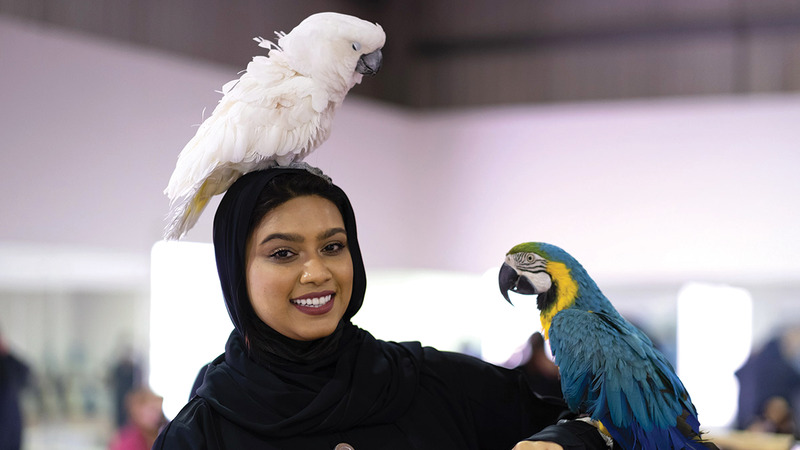 Entities concerned with psychological rehabilitation adopt the use of pets to treat or help treat mental illnesses, especially cases of isolation and depression.

Specialists go that “pet therapy contributes to relieving the pain of diseases in general, as it supports pain relief by 60%, which makes it the safest adjuvant treatment.”

They confirmed to “Emirates Today” the effectiveness of using pets as an auxiliary treatment, “provided that they are immunized, and take great care of them,” noting that “the most prominent results of this type of treatment is the enhancement of community communication in patients who suffer from isolation.”

The Director of Community Awareness at the Dubai Autism Center, Iman Abu Shabab, said that “dealing with pets cannot be considered a separate treatment in itself, as it is one of the complementary supportive methods that may provide some benefit when used in parallel with evidence-based treatments.”

She pointed out that “the center’s students had previous experiences in the field of swimming with dolphins and horse riding, but they did not continue, due to the lack of sponsors hosting such costly activities, compared to other supportive treatment methods.”

Abu Shabab said that “the center is currently organizing, in cooperation with the Security Inspection Department in Dubai Police, trips for a group of the center’s students to the police dogs unit trained to carry out orders and help children, in order to study the feasibility of students’ interaction with police dogs in developing communication and social interaction skills.”

She added: “It was observed during the period of practicing this activity that children who play and interact with police dogs show a significant decrease in feelings of anxiety and tension, in addition to improving their mood and enhancing their positive behaviors.”

For his part, Professor of Psychiatry at the College of Medicine, Ras Al Khaimah University, Dr. Talaat Matar, said that psychotherapy with pets succeeds in cases of autism, as bringing pets to cases with autism results in the appearance of signs of improvement on them, attributing this to “The person with autism does not have the ability to look outside the self, or form any social relationships, and therefore is not socially interactive,” noting that “the use of pets is an auxiliary treatment, not a primary treatment.”

He explained that “the normal person has a part of the brain responsible for perceiving the surrounding world, while the autistic person lacks this part, or is very weak, and therefore the use of pets with the sufferers develops the ability to interact with the other.”

He added that “the use of pets to treat psychological diseases such as depression is available in different places, especially in Europe, where social ties between individuals are not strong.”

Matar stressed that “the most important challenges facing treatment using pets is the type of disease, because some diseases do not work with this type of treatment,” noting that “care for pets that live in homes and are used for treatment, after vaccination and hygiene, prevents risks transmitting diseases.”

He identified more than seven benefits of using pets in the treatment of diseases, most notably that it reduces boredom, helps a person move, stimulates a person’s parental self (a sense of parenthood), increases a person’s social interaction, improves his mood, and reduces pain in general. Because 60% of physical pain is psychological, and therefore the pet reduces the feeling of this pain, and makes life meaningful for many people, especially the elderly who live alone.

On the other hand, the Dubai Foundation for Women and Children has implemented a program of psychotherapy with the help of pets, so that it is a complementary or alternative treatment to traditional psychological sessions, where some trained pets are used to improve the social and psychological performance of children and adults, especially after they have been exposed to strong traumas or negative experiences, Such as illness, loss, violence and abuse.

The Foundation’s Acting Director-General, Sheikha Saeed Al-Mansoori, identified seven goals for introducing trained pets into the therapeutic framework of the psychological services provided by the Foundation, which are firstly to develop new and innovative ways to support children and adults who are victims of violence and exploitation, and secondly to improve the adaptive and interactive capabilities of the victims, and thirdly to improve the victims’ capacity to perform their social functions, fourthly, improving the victims’ ability to establish healthy and positive relationships with others, fifthly alleviating the pain resulting from lived traumatic experiences or resulting from the victims’ exposure to any injuries, sixthly improving the mood of the victims and raising their happiness rates, and seventhly alleviating the psychological pressure generated by Trauma and violence. She stated that the duration of the program was six months, and 30 clients benefited from it, with 131 sessions held in various places, such as the Police Dogs Unit, and at the headquarters of the Dubai Foundation for Women’s Care.

Regarding the recovery rate of the cases that entered the first phase of the program, Al-Mansoori stated that the participants showed varying degrees of improvement in psychological, behavioral and social aspects, and this was proven through behavioral observation of customers, as well as reports of psychological and social specialists and the personal report of customers. It became clear, for example, that there are Significant development in the field of mood improvement, emotional discipline, desire for cooperation, participation, and concern for self and others.

Al-Mansoori explained that “Psychological therapy with the help of pets is considered an alternative treatment to traditional psychological sessions, or sometimes it is a complementary treatment to those sessions. It is usually defined as a psychological treatment that includes the introduction or inclusion of animals in the therapeutic framework, where some trained pets, such as horses, dogs, rabbits, fish and birds, are used to improve the social, psychological and adaptive functioning of children and adults, especially after they have been exposed to strong traumas or negative experiences such as illness, loss, or Violence, abuse and exploitation.

Animals are used in many places around the world, such as nursing homes, prisons, mental health institutions, centers for people of determination, and hospitals, specifically those specializing in serious diseases, such as cancer.

She stated that the initiative does not target mental illnesses or disorders, but rather women and children who are victims of violence, abuse and exploitation, who usually suffer symptoms of depression, anxiety, post-traumatic stress disorder, and others, albeit to varying degrees. Pet therapy contributes to relieving the pain of diseases.

The development of Al Ittihad Street in Ajman raises the capacity of the road to 16,000 vehicles per hour