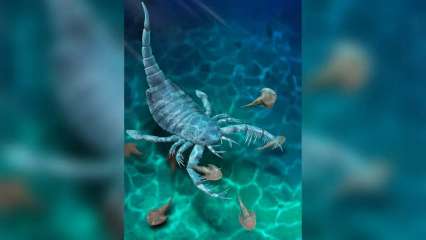 Have you ever seen or heard of a dog-sized scorpion? Although it may sound strange, scientists at the Nanjing Institute of Geology and Paleontology recently unearthed a fossil of a meter-long sea scorpion that existed in the seabed of southern China.

Researchers have estimated the existence of these scorpions 16 times longer than average-sized scorpions to be at least 400 million years old.

The dog-sized arachnids named Terropterus Xiushanensis are considered a relative of today’s horseshoe crab and whip spider. These scorpions are said to have similar prickly forelimbs and belong to the Mixopteridae, a group of eurypterids (sea scorpions) also known for their specialized arms used to catch prey.

“Our knowledge of mixopterids is limited to just four species in two genera, all of which were based on a few fossil specimens of the Silurian Laurussia 80 years ago,” said the study’s authors. The well-preserved fossils of this extinct species provide new evidence to understand the morphological diversity of mixopterids.

Dog-sized arachnids are thought to have existed during the Silurian Period, somewhere between 443.8 million and 419.2 million years ago. Sea scorpions were considered the main predators long before the evolution of barracudas or sharks.

The researchers deduced that sea scorpions used their tails, armed with their prickly jagged tips, to slaughter their prey.

Spider-Man: No Way Home to release in India a day earlier