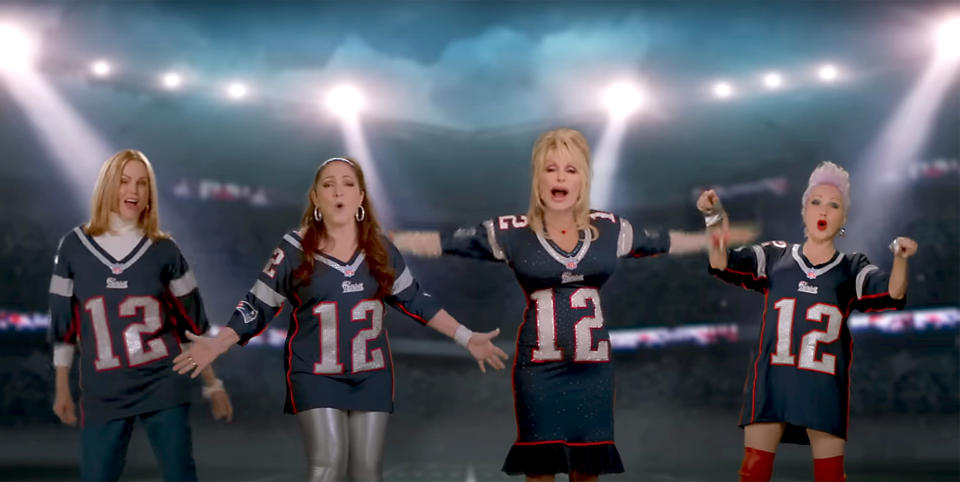 Dolly Parton, Belinda Carlisle, Cyndi Lauper, Gloria Estefan and Debbie Harry are all collaborating on “Gonna Be You,” the new single from the upcoming “80s for Brady” movie, about a group of older women who head to the Super Bowl to see playing Tom Brady. (The story takes place in 2017, when Brady was still with the New England Patriots.)

The uplifting song and video were released on January 20. The video (which does not include Harry) shows the singers in sequined Brady sweaters, with clips of the film interspersed.

The movie stars Sally Field, Jane Fonda, Lily Tomlin and Rita Moreno, along with Brady himself.

“It’s gonna be you / Who’s coming to my rescue when I’m drowning / Into the cold, deep water, yes you’re gonna dive in / You pull me through,” the iconic singers shout in the song’s chorus.

It’s a happy bop that has already won fans.

“Sensational talents in this feel good anthem! I love it, so catchy!” one person wrote on YouTube.

“I love that these AMAZING legends have come together for this positive and feel-good song!” someone else noticed.

“LOVING THIS! Their voices together! OMG! Legendary!” another person raved.

“Gonna Be You” was written by Emmy and Grammy winning songwriter Diane Warren.

“When I wrote ‘Gonna Be You’ for ’80s for Brady, I wanted to write a song that celebrated these women’s deep friendship,” said Warren in a press release.

“Since 80 was in the title it gave me a crazy idea, why not have some of the most iconic singers of the 80s, who are still amazing and always will be, sing it all?!!!! Everyone I approached said yes and was just as excited as I was!! I am honored to have Dolly Parton, Belinda Carlisle, Cyndi Lauper, Gloria Estefan and Debbie Harry on this track!! ‘Gonna Be You’ is that song you want to sing along with all your good friends!!!”

“What an honor to sing a song by my favorite songwriter with four other women I’ve been fans of for years! It doesn’t get much better than this,” Carlisle said.