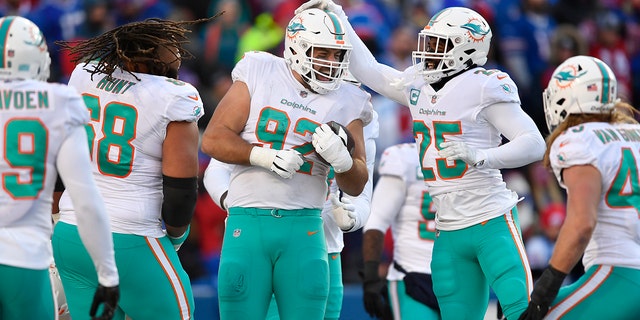 Miami Dolphins defensive tackle Zach Sieler made a game-breaking play in the third quarter of the team’s wild card game against the Buffalo Bills and now must fulfill a promise he made to his wife Hannah.

With about 14 minutes left in the third quarter, Bills quarterback Josh Allen fumbled the ball on a big hit into his team’s own territory. Sieler rushed to the bouncing soccer ball and picked it up and ran another five yards into the end zone.

Sieler’s score and Jason Sanders’ point-after-try put Miami up 24–20. It was the Dolphins’ first lead of the game, completing a comeback after trailing by 17 points early in the second quarter.

Zach Sieler #92 of the Miami Dolphins celebrates after scoring a touchdown against the Buffalo Bills during the third quarter of the game in the AFC Wild Card playoff game at Highmark Stadium on January 15, 2023 in Orchard Park, New York.
(Bryan M. Bennett/Getty Images)

“I’m shaking and crying,” she wrote in the caption of a video posted to social media. “Omg. Are you kidding me. A WHOLE TOUCHDOWN.”

Hannah Sieler added in a tweet that her husband now owes her a game ball.

“All I’m saying is @zachsieler promised me I’d get the game ball if he ever scored a touchdown,” she wrote.

Zach Sieler is in his fifth season in the NFL. He was a seventh-round pick from the Baltimore Ravens in 2018 and the Dolphins signed him in December 2019.

His role with the Dolphins increased in 2022, starting 15 of the 17 games he played in. He recorded 3.5 sacks and 70 tackles during that span. He can now add a postseason touchdown to his resume.