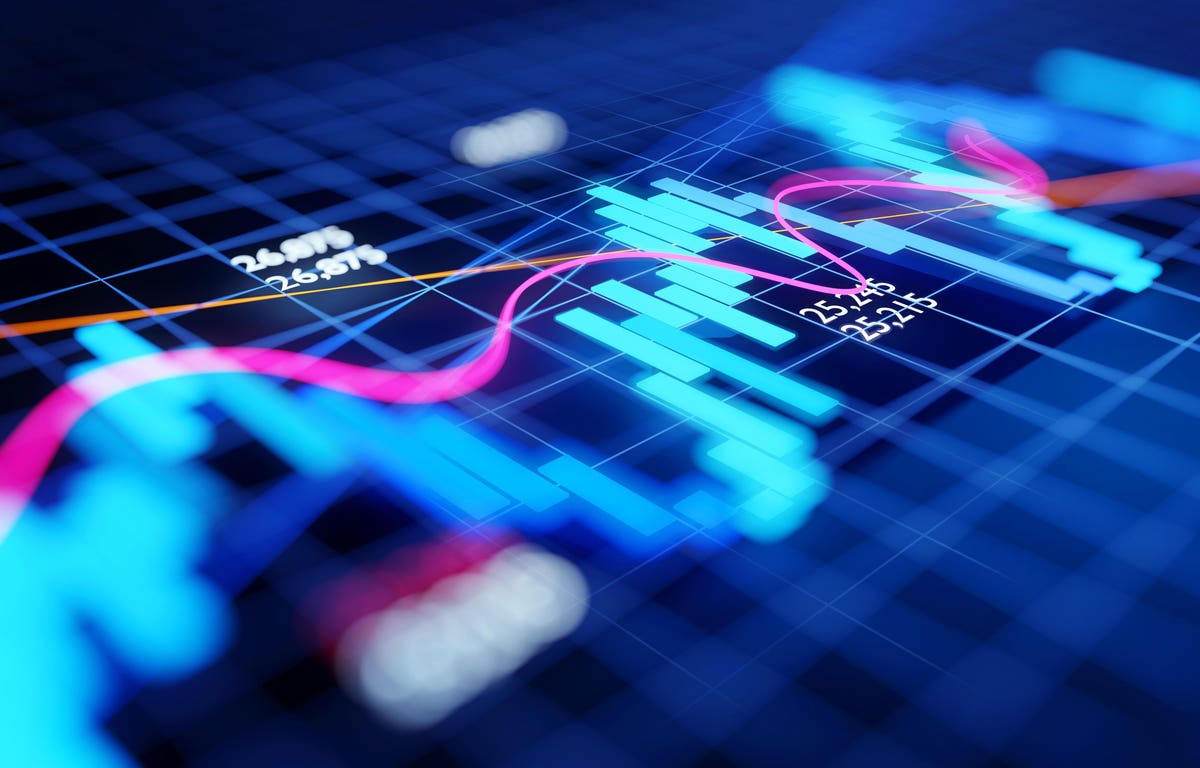 FTX’s crypto collapse hampered the stock market rally en route to Thursday’s CPI report after shares rose on Monday and Tuesday. The more than 2% drop in the Nasdaq Composite and S&P 500 on Wednesday fueled bearish activity. It was also a rough day for the leading Dow Jones Industrial stocks, as 29 out of 30 stocks were lower. Walt Disney (DIS) was down 13.2% while Occidental Petroleum (OXY) fell 9.2% as both lost revenue.

The Double Digit Drop in Bitcoin last week is likely to set off waves for several months if not longer. The drop was consistent with the dominant negative trend that has been in place all year and Friday’s Bitcoin analysis is still pointing lower after a bounce.

Thursday’s gains were record-breaking as new buys and shortcovers pushed stocks further to close out the week on a strong note. The Dow Jones Industrials rose 8.8% for the week and is now just 7.1% lower than year-to-date (YTD). The relative performance analysis identified it as the market leader in October.

The Nasdaq 100 reports rose 8% after reaching its monthly pivot support in the previous week (see chart). The S&P 500 had one of its rare weekly gains of 5.9%, while the Dow Jones Transportation Average also rose strongly by 5%.

The positive investment tide was strong enough to stimulate all markets as the Dow Jones Utility Average and SPDR Gold Trust both rose more than 4%. Market internals were very strong on the NYSE as 2660 issues advanced this week and fell just 760.

Both bond and equity markets followed the scenario outlined last week as stock market bulls passed their test, but it was the interest rate markets that provided the best indications of Thursday’s gains.

The correlation between interest rates and the stock market has been unusually high since June last year, when the fall in interest rates set the stage for the summer rally. The new upward trend in yields put pressure on equities as they peaked in August, providing additional fuel for the market’s decline. Having followed the treasury futures market since its inception, I must point out that historically the correlation has not always been so clear.

Ahead of the FOMC announcement on November 2nd my analysis of both the 10-year and 2-year T-Note indicated that returns were nearing their peak. The fact that the 10-year yield had tested the 20-day EMA increased the chances of another push higher in yields. The 10-year yield rises from 3.92% to 4.218% before falling lower on November 8e.

The multiple negative divergences in the MACD and MACD-His and their weak action gave me confidence in a rally failure. Thursday’s drop in interest rates and support from the close-up of 3.840% confirm a top. Yields did close below the daily starc band on Thursday, as the bond market closed on Friday. This increases the chance of a rebound in yields this week before going even lower.

While the return on the 10-year T-Note didn’t hit a new high as I thought it might, the 2-year T-Note did, as the 4.780% high was right on my chart and the pivot resistance target zone. Yield hasn’t fallen below my 4.258% support level yet, but it seems likely soon

The sharp decline in yields was likely fueled in part by a short squeeze in Treasury futures. The CFTC’s recent Commitments of Traders (COT) report revealed a very high short position in the 2-year T-Note Futures. The short position of the major speculators has almost doubled since August.

The 2-year T-Note futures have been trending lower since August. This is supported by the fact that the monthly pivot levels (in blue) have turned lower over the past four months, which is a sign of a trending market. The rallies against the trend have been identified by declines under the starc bands and testing of the monthly pivot support (in green). On Friday November 4e (point b) the futures hit both levels that set the stage for this week’s rally

We’ll get data this week on how many shorts needed to be covered, but I believe the short squeeze has probably just started as a move in the futures back to the early October highs wouldn’t be surprising. If that happens, maybe some of these big speculators will start paying more attention to the charts. It seems that the big speculators and hedge funds have sustained this trend for too long

In October, the BofA survey of major money managers revealed their largest cash position since 2001, as they have a bleak outlook for corporate earnings over the next 12 months. We’ll be getting another survey in the next week, but I imagine many will think this is just another bear market rally that they expect to fail.

Last week’s action was strong enough to make the majority of my weekly and daily progress/decrease indicators positive. This means that the market is likely to move even higher towards the end of the year. The same analysis gave us good warning in August that the rally was over.

The fact that the daily S&P 500 Advance/Decline line emerged from the WMA on Friday, November 4e in my opinion was “a very bullish setup when the WMA rises.” The A/D line made higher highs early last week, which was needed to support a move through the resistance at $390.75, line b.

Wednesday’s sharp pullback in the A/D line didn’t provide the all-clear forecast ahead of the CPI report, and I’ve increased a few stops as a result. the spy

SPY
closed above its starc+ band for the past two days and monthly R1 stands at $401.12.

The downward trend in the area of ​​$412, line a, is the near term target, but I think we will see a pullback before it hits. I would like to see even stronger A/D numbers at the next rally to see the WMAs rise sharply.

Most ETFs and many stocks are on the upside after last week. One I liked from last week Stericycle (SRCL) rose more than 10% last week. The expected pullback this week should provide more reasonable entry points, but I’d carry on focus only on ETFs and stocks leading the S&P 500. As always, be aware of the risk.