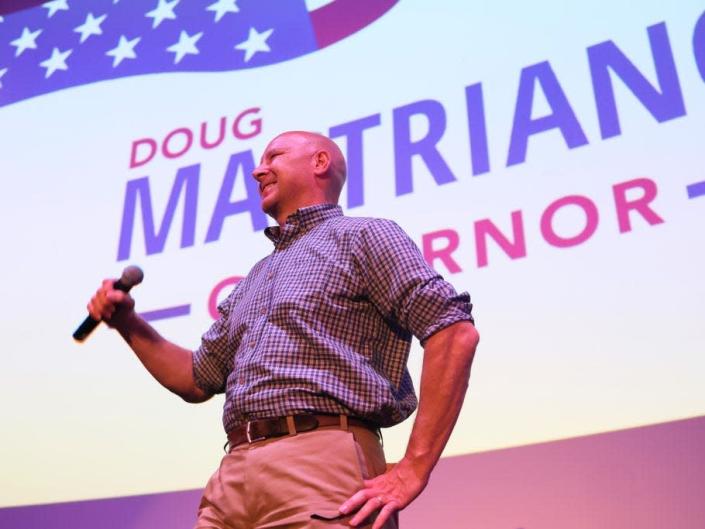 Pennsylvania GOP governor candidate Doug Mastriano praised an endorsement of Joseph Kolakowski, an ultra-Orthodox rabbi who expressed sympathy for the Capitol rioters and believes Hitler was partially a lizard.

The Philadelphia Inquirer reported that Mastriano shared a story from the Epoch Times, a far-right publication, with his supporters on social media with the headline, “Rabbi Endorses Mastriano While Shapiro Calls Him Anti-Semitic in Pennsylvania Government Race.”

In the article, Kolakowski — who runs a Hasidic Jewish ministry in Pennsylvania — defended Mastriano by saying, “While the Democrats have the audacity to claim that those of us from the Lincoln Party are racist in some way, they look not to the racist tenants. of their own party, including abortion and gun control, both of which cause disproportionate and disproportionate harm to people of color, and are historically rooted in overtly racist ideologies.”

The Inquirer reported that the 38-year-old rabbi regularly posts on his YouTube channel about unfounded claims of fraud in the 2020 election, his support for rioters in Capital and believed in a theory that Adolf Hitler was part lizard.

In a video about the Nazi dictator, the rabbi said there is “a reason why he never took off his boots.”

“[It] was to hide the fact that his feet were reptilian in nature because he came from this non-human race, demonic race. He was a hybrid.”

In an email to Insider, Kolakowski acknowledged his earlier comments about Hitler, but said the story may be more of an urban legend and doesn’t know “if it’s literally true.” He also said he had contacted the Mastriano campaign because he felt the senator was “unjustly” vilified as anti-Semitic.

In an interview with the Inquirer, Kolakowski said that after he contacted the campaign, he was asked to write something. His statements were later published in the Epoch Times.

Jewish leaders and Democrats have criticized the Trump-backed candidate for his ties to far-right extremists and his efforts to gain support from Gab, a social network founded by a self-proclaimed Christian nationalist.

Mastriano praised the site’s founder, Andrew Torba, who has said Jews are not welcome in his movement. Insider reported that Mastriano also paid the site $5,000, per campaign finance.

Mastriano takes on Democratic candidate Josh Shapiro in the Pennsylvania governor’s race. Recent polls show Shapiro is 7.3 points ahead of his opponent.

Mastriano’s campaign did not immediately respond to Insider’s request for comment.