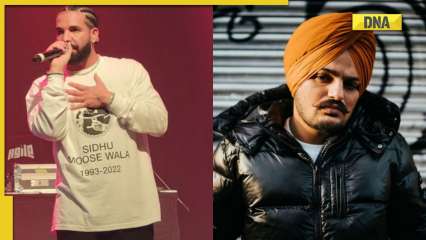 On Friday, July 29, it will be exactly two months since Sidhu Moose Wala was shot by unknown men in Punjab. Famous Canadian rapper Aubrey Drake Graham, better known as Drake, paid tribute to the late rapper and his friend during his concert in Toronto.

At his concert on Thursday, July 28, Drake wore a t-shirt with Sidhu’s photo on it, which also included the late singer’s name and his birth years 1993-2022. The photo was shared on the Instagram page of Sidhu Moose Wala, who has kept his family active after his shocking death. The videos of Drake’s concert are also going viral over the internet.

It’s not the first time Drake has paid tribute to Sidhu. After his death, the Canadian rapper took to his Instagram Stories and posted a photo of Moose Wala with the late singer’s mother and wrote “RIP MOOSE @sidhu_moosewala.” Then, in June, Drake played two of Sidhu’s great hits 295 and G-Shit when he presented the debut episode of his Table for One radio show on SiriusXM broadcaster’s Sound42 channel.

ALSO READ  Tyler Perry Interview @ MVAAFF: 'A Jazzman's Blues', his inspiration for jazz music and his film about WWII

Remembering his late son, Sidhu’s father Balkaur Singh paid an emotional tribute to his son on Thursday, July 28, when he had his son’s face tattooed on his arm. He also had the tattoo artist write Sarwan Putt, which means obedient and caring son, on his arm in the Punjabi language.

ALSO READ  Drake reacts to dad's weird tattoo of him: 'Why are you doing this to me'

For the inexperienced, Shubhdeep Singh Sidhu, popularly known as Sidhu Moose Wala, was shot dead by unidentified assailants on May 29, near his home village in the Mansa district of Punjab, a day after his security briefing by the government of Punjab was withdrawn. Diljit Dosanjh and Kapil Sharma have also paid tribute to the legendary singer in their shows after Sidhu’s passing.

Shamita Shetty Reveals Why She Announced Her Breakup With Raqesh Bapat, Says ‘We Don’t Want…’