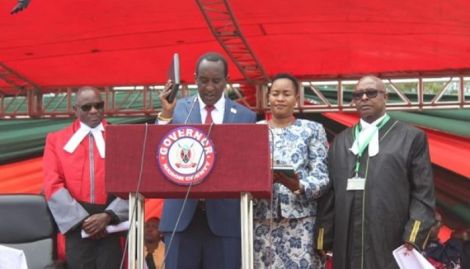 Narok Governor Patrick Ole Ntutu and Senator Ledama Olekina engaged in a bitter discussion on Wednesday, Jan. 25, over a president-elect William Ruto’s event in the province.

The exchange began when Ntutu announced that the Narok senator was not invited to an event expected to be graced by President Ruto and his deputy Rigathi Gachagua.

President Ruto and Gachagua are expected to lead a large number of government officials in attending a thanksgiving service in Narok province on Sunday, Jan. 29..

Patrick Ole Ntutu takes his oath of office as Governor of Narok County at Ole Ntimama Stadium, Narok on August 25, 2022

“The Senator is not welcome at the event to be held at William Ole Ntimama Stadium.

“He is a social media persona and TV celebrity. He will follow the event on social media and comment on TV,” the first-term governor said.

The governor further added that he had no personal feud with Olekina, even though the senator was not welcome at the event.

“We don’t have any problem with him, let him continue to play his oversight role in the Senate,” Ntutu noted.

In his reply, Olekina was adamant that no one could forbid him from visiting Narok or any other place in Kenya, regardless of the guest of honor.

“The governor doesn’t want me to expose the things he does and so he labels me as a social media and TV person.

“He cannot restrict my movement because I am everywhere and my influence is felt in the government of Narok County,” he replied.

“He doesn’t know that I have records of illegal bidding and his naiveté about legal matters,” the senator claimed.

Ole Kina and Ntutu have been at odds for some time with the former alleging that the governor is bribing County Assembly members (MCAs) through deceit.

“It’s my job to raise funds for the county. But how am I supposed to answer questions about something that’s unconstitutional? I’m asking the governor to stop lying to the MCAs that he can give them any kit because it’s illegal,” accused Ledama Ntutu. on December 25, 2022.

In response, Ntutu accused the senator of sabotaging the county’s development rather than leading the way in supporting it.

“We are discussing a very crucial topic that will guide our development agenda in the next five years.

“I’ve invited our senator to join us in listening to the challenges facing our people, but he’s too busy speaking too much ‘English’ on television,” the governor said at the time. 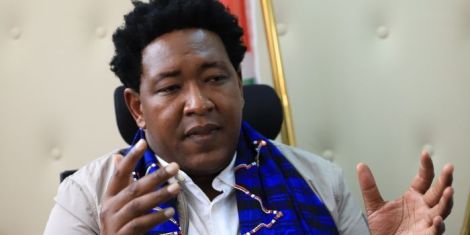 More than 4,500 bars are scrambling for liquor licenses to beat Gachagua orders