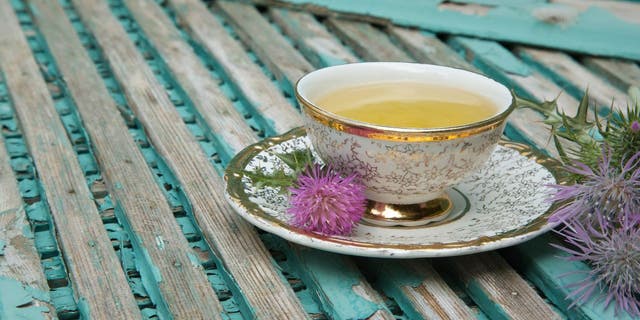 That cup of tea in the morning can provide more benefits than just a jolt at the start of the day.

After reviewing recent studies, researchers have concluded that people who drink four cups of black, green, or oolong tea have a lower risk of developing type 2 diabetes, heart disease, or stroke over the course of a decade.

“Our results are exciting because they suggest that people can do something as simple as drinking four cups of tea a day to potentially reduce their risk of developing type 2 diabetes,” said Xiaying Li, a researcher at the Wuhan University of Science. and Technology, in a press release posted to Eureka Alert.

The studies examined the tea drinking habits of more than a million adults in eight different countries.

Researchers found that drinking four cups of tea a day reduces the risk of diabetes, heart disease and stroke by 17% over a 10-year period.
(iStock)

The review — titled “Tea Consumption and the Risk of Type 2 Diabetes: A Cohort Study and Updated Systematic Review and Dose-Response Meta-analysis” — was presented Sept. 21 at the annual meeting of the European Association for the Study of Diabetes, reported the EASD website.

While the researchers found that drinking four cups of tea a day can reduce the risk of diabetes, heart disease and stroke by 17% over a 10-year period, drinking fewer cups apparently also offered a health benefit.

Those who drank one to three cups of tea daily had a 4% lower risk of developing diabetes.

Heart disease is the leading cause of death in the United States as of 2020, according to the Centers for Disease Control and Prevention (CDC).

Death from stroke and from diabetes were fifth and eighth respectively.

Other studies have also shown that those who drink several cups of black tea each day have a lower risk of death than those who don’t, according to the National Institutes of Health (NIH).

The new study also found that those who drank several cups of tea each day had a lower risk of heart disease and stroke compared with those who didn’t drink any tea.
(iStock)

A study published in August 2022 found that of 498,000 people in the UK surveyed, those who drank at least two cups of black tea every day lowered their risk of death by 9% to 13%, compared with those who didn’t. did. drink any kind of tea, the NIH reported.

“We still need to follow dietary guidelines to avoid too much sugar and too much saturated fat.”

In addition, the August study found that drinking large amounts of tea — more than 10 cups a day — posed no additional health risks.

The overview of tea consumption was presented on September 21 at the annual meeting of the European Association for the Study of Diabetes.
(iStock)

Neither did adding milk or sugar to the tea — although the people who took part in the study didn’t usually add large amounts of sugar to their tea, Inoue-Choi said.

“The sweetened tea from the store has a lot more sugar,” she told the same outlet.

“We still need to follow dietary guidelines to avoid too much sugar and too much saturated fat.”

Inoue-Choi explained in the Eureka Alert press release that the health benefits of consuming tea likely come from polyphenols, the compounds found naturally in tea that are believed to reduce inflammation while also having an antioxidant effect.

Other studies have suggested that tea consumption lowers the risk of certain cancers, the National Cancer Institute reported. However, the organization points out that the evidence regarding the potential benefits of tea consumption in relation to cancer “is currently inconclusive.”

Others warn of the new findings regarding drinking tea and a lower risk of diabetes, heart disease or stroke.

“The words ‘suggest’ and ‘potential’ are crucial here” in the new study, said Dr. Kevin McConway, professor emeritus of applied statistics at The Open University, a British public research university, in a separate statement, as Medscape reported.

“Drinking tea would only be helpful in reducing diabetes risk if drinking tea reduces risk — that is, if the risk is reduced if you drink the tea and not if you don’t — and this study just can’t show whether it either does this or it doesn’t,” Conway said.

Christine Rousselle is a lifestyle reporter at TBEN News Digital.