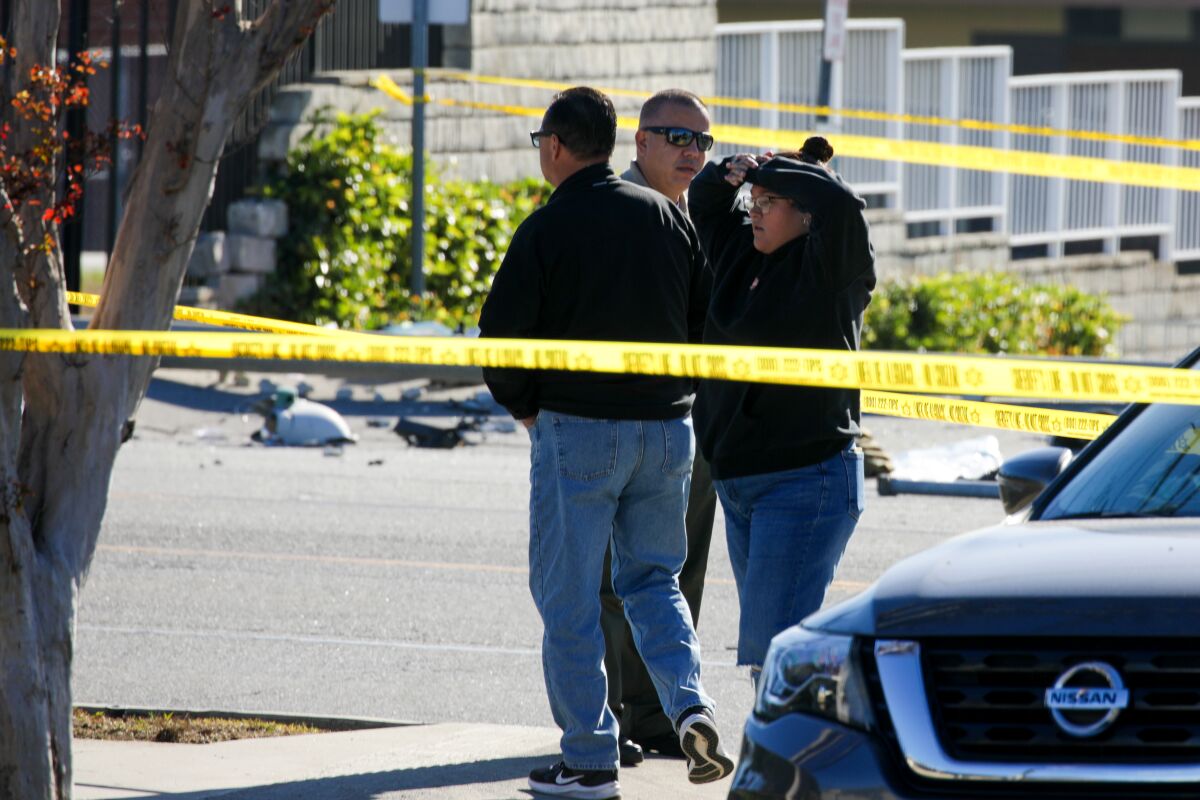 The 22-year-old driver’s attorney disputed LA County Sheriff Alex Villanueva’s claims that a crash last week that injured a group of recruits on a South Whittier training drive was “a tragic accident” that happened when the man fell asleep behind the wheel on his way to work.

The driver, Nicholas Joseph Gutierrez of Diamond Bar, traveled Wednesday morning in a Honda CR-V to his job as an electrical engineer for a solar panel company, his attorney, Alexandra Kazarian, said Monday. Gutierrez, who wakes up at 5 a.m. for work, hadn’t been up late the night before, she said.

“He’s a good boy who fell asleep early in the morning on his way to work,” Kazarian said.

The recruits — the majority from the LA County Sheriff’s Department — were running in four columns, accompanied by drill instructors and two black-and-white radio cars, when an SUV pulled onto the wrong side of the road and about drove into the group. 6:30 a.m. near the sheriff’s STARS Center training academy.

The runners at the front of the formation were able to get out of the way before the SUV hit others and crashed into a light pole, authorities said.

In an interview with NewsNation last week, Villanueva said investigators had “probable reasons to believe [the crash] was intentional.” Villanueva later confirmed to The Times that there was probable cause to arrest the driver on suspicion of attempted murder due to evidence that he deliberately ran into the recruits.

“I have no idea why the sheriff said that,” Kazarian said. “All indications in the preliminary investigation are that there is no evidence whatsoever that this was intentional.”

A breathalyzer was administered at the scene and authorities found no evidence of alcohol, Villanueva said, noting that the driver “blew a 0.0”. But authorities are trying to determine whether Gutierrez was under the influence of other controlled substances at the time of the crash. A law enforcement source familiar with the investigation said marijuana was found in the driver’s vehicle.

Kazarian said Gutierrez was taken to hospital and had a toxicology and sobriety test. “Everything came back negative,” she said.

Gutierrez comes from a law enforcement family, Kazarian said. His father is a retired correctional officer and he has uncles in the Los Angeles Police Department, the California Highway Patrol and the Sheriff’s Department.

“He harbors absolutely no animosity toward law enforcement,” Kazarian said. She added that reports that Gutierrez was a disgruntled academy recruit are “completely false.” He “never had any association with being a recruit,” she said.

Gutierrez was released on Thursday after investigators said they needed more time to gather evidence and could legally hold him for no more than 48 hours without presenting the case to prosecutors.

In an interview with KNBC-TV Channel 4, Gutierrez also said that he “didn’t do it intentionally.”

“I wish it had never happened. I’m sorry it happened,” he said. He broke the news that he had been dragged from his Honda sports car.

“They tried to say I did it on purpose, which I didn’t,” he said. “I kept telling them I didn’t. I asked if everything was okay.”

Kazarian said Gutierrez was injured after the crash and that “it wasn’t a result of the airbags or the accident itself.” She declined to give further details.

On Sunday, four recruits from Sheriff’s Academy Class 464 were in critical condition. One recruit, Alejandro Martinez, had suffered setbacks that left him in serious condition.

Martinez suffered brain swelling, compound fractures of the femur, a collapsed lung and multiple organ damage and was placed on a ventilator, according to sources familiar with the incident but not authorized to speak publicly about the matter.

Villanueva said he sworn in Martinez as a deputy on Sunday.

“His life ambition is to become a deputy sheriff,” said Villanueva.