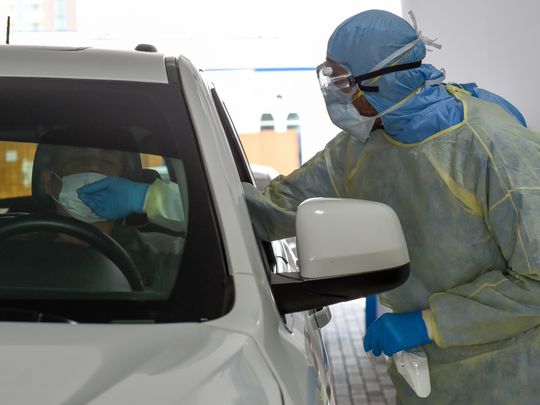 Dubai: The ‘Mother of the Nation, an Inspiring Role Model’, an initiative organized by the Maitha Bint Ahmed Al Nahyan Foundation for Community and Cultural Initiatives, has elicited a remarkable response from frontline health workers Dubai line.

Frontline workers, including medical and administrative staff from Dubai hospitals, expressed their gratitude to the “ Mother of the Nation ” Her Highness Shaikha Fatima Bint Mubarak, President of the General Women’s Union, President of the Supreme Council for Motherhood and Childhood and Supreme Chairperson of the Family Development Foundation, for her efforts to promote the welfare of the UAE community.

Medical and administrative staff from the Emirate’s Rashid, Latifa and Dubai hospitals participated in the celebrations and expressed their gratitude for Shaikha Fatima’s continued support and encouragement. On the occasion of Eid Al Fitr, Shaikha Fatima sent a personal message to medical staff to congratulate them for their efforts during the pandemic and to thank them for their commitment and hard work.

Shaikha Maitha Bint Ahmad Bin Mubarak Al Nahyan, President of the Maitha Bint Ahmad Al Nahyan Foundation for Community and Cultural Initiatives, said: “This initiative gives us the opportunity to express our gratitude to a national leader who dedicated himself to ensure the well-being of women, children and families from the creation of the nation. His Highness was a partner of the late Shaikh Zayed Bin Sultan Al Nahyan in his efforts to promote the welfare of families. Shaikha Maitha thanked the frontline workers for their efforts to serve the nation as well as for their participation in the initiative.

Frontline health workers at Dubai hospitals expressed their gratitude to Shaikha Fatima for her support and encouragement, saying she was an inspiration to them in service to the UAE community.

Shaikha Maitha thanked the frontline heroes for their contributions to the initiative and their efforts to serve the nation. The ‘Mother of the Nation, Inspirational Role Model’ initiative, which has been extended to all emirates of the United Arab Emirates, will end on the 49th national holiday, which falls on December 2.