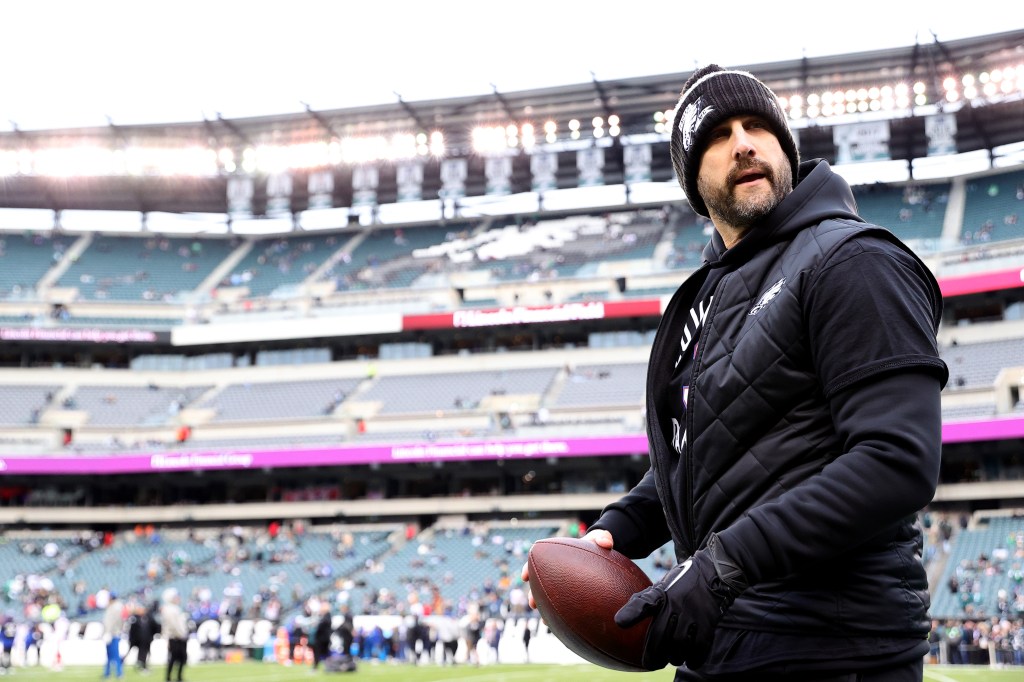 Take Eagles head coach Nick Sirianni and his introductory press conference, for example. When Sirianni was hired ahead of the 2021 season, he looked and sounded nervous, insecure and outdone that day.

By comparison, Sirianni held the infamous opening press conference for former Jets head coach Adam Gase, whose eyes darted in all directions and became an Internet meme, looking like Vince Lombardi being introduced.

And the Eagles players Sirianni would soon coach watched with interest.

“Oh, yeah, he couldn’t breathe and everything,” defensive end Brandon Graham told The Post on Wednesday.

“It was his first,” veteran center Jason Kelce told The Post. “Certainly, a rocky start in the Philadelphia media for him.”

However, Sirianni quickly endeared himself to his players in his first full team meeting, acknowledging his poor performance in front of the notebooks and cameras.

“He was angry at the press conference and he said that to us at our first team meeting,” said Graham. ‘He called it. I remember him saying, “I screwed up.” ”

Kelce was amazed at how Sirianni reacted to his first press conference and the mockery that came with it.

“I loved the way he handled it because he owned it,” said Kelce, “He owned it to us. He admitted he went there and had a horrible press conference and everyone was ripping him off and next time was he better. That’s the message. The message was to improve and be honest with yourself when judging yourself.

“The worst thing a man can do is pretend he didn’t play a bad game. Then you know you’ve got a bad player – when they do something bad and pretend they haven’t done anything bad. It’s the same with a coach. That’s when you have a bad culture, when you don’t have accountability or an honest level of self-evaluation.”

“It takes a secure individual, a secure leader to do something [Sirianni] did.”

Sirianni’s stay was like one of those internet memes about “how it started, how it goes.” He is now an NFL Coach of the Year nominee. He led the Eagles to the No. 1 seed in the NFC and is set to face the Giants in the division round on Saturday.

“How Nick behaves with the team and on the pitch and how he communicates with his players and respects his players… all those things will matter much more than what he says at a press conference. And he’s definitely there got better at it. The moment you come in here and talk to the guy, you can’t help but be excited yourself because of how excited he is.”