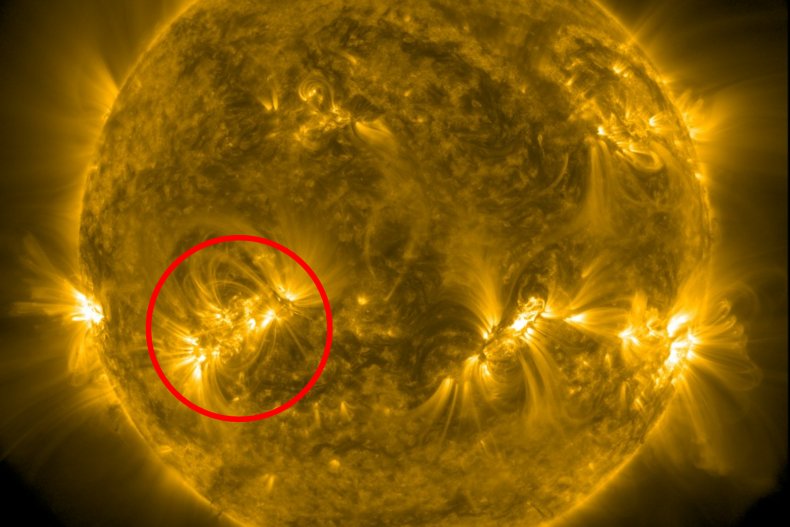 The sun woke up grumpy this week, developing unusually unstable magnetic fields at some sunspots that could result in rare and violent X-class flares being fired at Earth.

X-class flares are the most powerful type of solar flare and can cause global radio blackouts and radiation storms if they hit Earth.

Sunspots are areas on the surface of the sun where the magnetic field holds a higher energy level because their magnetic field lines are twisted. “Beta-gamma-delta” fields are caused by groups of sunspots with a beta-gamma magnetic configuration that also contain one (or more) delta sunspots.

According to spaceweatherlive.com, having a beta-gamma magnetic configuration means the sunspot group is bipolar, with different magnetic polarities, “but complex enough that a line cannot be drawn between spots of opposite polarity,” and delta sunspots have reversed magnetic polarities.

Solar flares are emissions of electromagnetic radiation — usually X-rays — from the sun, while CMEs are plumes of millions of tons of solar plasma ejected from the sun’s surface.

Sunspot AR3182’s strange magnetic field therefore helps NASA increase the chance of an X-class solar flare by up to 30 percent.

“Solar flares are classified according to how bright they are in the soft X-ray portion of the spectrum,” Gonzalo José Carracedo Carballal, an astrophysics researcher at the Instituto Nacional de Técnica Aeroespacial in Madrid, Spain, previously told Newsweek.

The weakest are the A-class flares, followed in intensity by the B-class, C-class, M-class and the X-class, Carracedo explained.

X-class flares usually only occur about 10 times a year. If these flares are directed toward Earth, they can cause damage to satellites, problems with global transmission and global radio outages. The last X-class flare took place last week, on January 5, 2023.

This is because the flares interfere with Earth’s ionosphere, preventing radio signals from passing without distortion.

During the 1859 Carrington event, the most powerful X-class solar flare in recorded history is believed to have struck Earth, resulting in bright aurorae seen around the world. It is also thought to have caused sparks and even fires in some telegraph stations.

It is thought that if a storm of this magnitude happened today and hit Earth, it would result in prolonged power outages and major disruptions to communications.

“But an event similar to the Carrington event happening today could cause between $0.6 and $2.6 trillion in damage in the U.S. alone, according to NASA spaceflight,” said Rami Qahwaji, a professor of visual computing from the University of Bradford, previously News week.

Got a tip on a science story Newsweek should cover? Do you have a question about sunspots and solar flares? Let us know at [email protected]