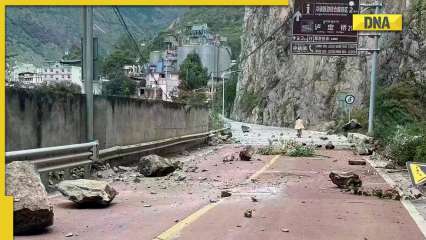 China was rocked Monday by the most powerful earthquake to hit the country since 2013. The massive earthquake measuring 6.8 on the Richter scale hit southwestern Sichuan province. The earthquake struck at 12:25 a.m. local time and occurred at a depth of 16 km, with the epicenter 39 km from the Luding country estate in Sichuan. More than 30 people have already died in the natural disaster, with fears that the toll could rise further.

Several villages are within a 5 km radius of the earthquake epicenter. While more than 30 have been killed and 30 more injured so far, about 21 million people have been confined to their homes as aftershocks continued. The earthquake also caused significant damage to infrastructure, including communications services, transportation, electricity and water services.

As the death toll continues to rise hours after Earth, several videos have surfaced on social media in which locals captured the scary moment of the earthquake. In a video of a car driving on the road, a video shot from the inside shows nearby trees and poles vibrating violently as debris begins to fall from nearby buildings.

Some other videos show food in a kitchen being forcibly ejected from a stockpot, chandeliers swinging wildly and water splashing from an aquarium.


Video footage captured the moment when the 6.8 magnitude earthquake struck some parts of southwestern China’s Sichuan province today. More than 30 people are said to have died in the disaster. Rescue work is underway. https://t.co/YfxApUCZ36 pic.twitter.com/NTaBszE089— FrontSource (@FrontSource) September 5, 2022

Videos also show debris from high-rise buildings raining down and causing a large number of landslides.

A video also showed a female giant panda rushing her two cubs into the open field as the earthquake continued.

Chinese President Xi Jinping has ordered a total bailout to minimize casualties. Sichuan province has activated the second-highest level of emergency response for the disaster, with more rescue teams moving to the epicenter.

Monday’s earthquake brought back memories of two devastating earthquakes in China, when a magnitude 7 earthquake in 2013 killed 200 people and an unimaginable magnitude 8.2 earthquake struck the same province in 2013. 2008 in which more than 69,000 people died. The earthquake adds to the woes of the province, which is already reeling under Covid-19 and intense drought.