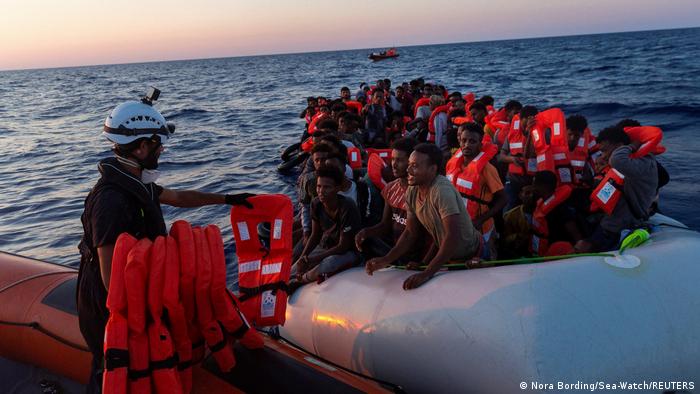 The court ruled that a port country may take detention measures “if there is a clear risk to safety, health or the environment”. The ruling added that it is up to the port country to demonstrate such risks.

The case is an example of tensions between rescue organizations and countries like Italy on the EU’s southern border, facing thousands of migrants trying to enter the EU illegally on dangerous makeshift boats.

Nearly 2,000 people are believed to have died or gone missing while attempting to cross the central and western Mediterranean in 2021, according to the UN.

Thousands of migrants, mostly from Africa, risk their lives every year trying to cross the sea to the EU

What is the legal background of the Sea Watch case?

The ECJ’s guidelines stem from a dispute between the Berlin-based humanitarian organization Sea Watch and the Italian port authorities during rescue operations in the Mediterranean in 2020.

The German-flagged ships, Sea Watch 3 and Sea Watch 4, rescued and disembarked hundreds of people at sea in the Sicilian ports of Palermo and Porto Empedocle.

Port authorities inspected the ships and concluded that they were not certified for marine search and rescue, as the ships had taken on board far more people than they were allowed to accommodate.

The port detained the ships because of “technical and operational deficiencies that pose a clear risk to safety, health or the environment”.

ALSO READ  Spain's Medieval Find: A Pego Santuario Where One Can "Live Without Problems"

Sea Watch then accused the Italian port authorities of “exceeding the powers” of a port state under international law. An Italian court sent the case to the Court of Justice to clarify “the scope of the port State’s control and detention powers on ships operated by humanitarian organizations”.

Sea Watch on Twitter called the ECJ guidelines a “victory for rescue at sea”, providing “clear legal certainty for NGOs”, adding that “arbitrary checks” would end.

The court said international maritime laws establish a “fundamental duty to provide assistance to persons in danger or distress at sea”.

The ECJ said people boarded a ship run by organizations such as Sea Watch after a rescue mission “should not be taken into account” when verifying compliance with maritime safety rules.

“The number of persons on board, even if it exceeds the permitted number, cannot therefore in itself constitute a ground for control,” the Court of Justice said in a press release.

The ECJ also said that regular use of cargo ships not registered for rescue operations could trigger checks. However, this does not mean that a port state can require a ship to provide evidence that it meets the requirements for another type of ship classification.

However, after the people disembark, the port state has the right to inspect a ship for other violations, the court said. If an inspection reveals deficiencies, that port country can take “corrective actions” that are “appropriate, necessary and proportionate”.

It is now up to the Sicilian court to decide whether the specific circumstances in these cases justify the actions of the port authorities.