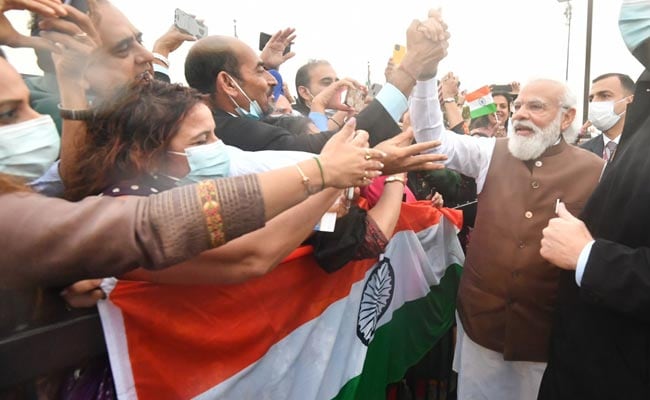 This is Prime Minister Modi’s first visit abroad beyond the neighborhood since the coronavirus epidemic in January 2020.

The crowd chanted his name and waved the Indian flag amid light showers. The Prime Minister was seen smiling and shaking hands with members of the Indian community.

Another member of the Indian community said Prime Minister Modi’s visit would be “very important” in strengthening ties between India and the United States.

“This visit is very important in strengthening ties between India and the United States, given the COVID-19 crisis and Afghanistan. He is the leader who can solve any situation in the world. We are proud, we are Indians and he represents millions of Indians, ”she said.

Upon arrival at the airport, he was received by officials from the US State Department, including TH Brian McKeon, US Assistant Secretary of State for Management and Resources at Joint Base Andrews in Washington DC.

During his three-day visit to the United States, Prime Minister Modi will address the United Nations General Assembly and attend the Quad Leaders’ Summit as well as a bilateral meeting with US President Joe Biden at the White House.

Joe Biden will welcome Prime Minister Modi to the White House tomorrow – the first face-to-face meeting between the two leaders since Biden assumed the presidency of the United States on January 20.

Before leaving for the United States to participate in the Quad Leaders Summit, Prime Minister Narendra Modi said Wednesday that his visit would be an opportunity to strengthen the strategic partnership with the United States, Japan and Australia.

When will the COVID-19 vaccination campaign for children in India begin? Know what the Center has to say

Over 103.53 crore of COVID-19 vaccine doses administered in India to date

The Bharat Express News - October 27, 2021 0
Chelsea manager Thomas Tuchel has revealed that the trio of Cesar Azpilicueta, Andreas Christensen and Ruben Loftus-Cheek all suffered injuries in training on Monday. The...