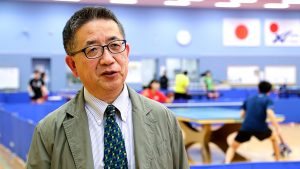 Mima Ito and Jun Mizutani winning the gold medal in mixed doubles at the Olympic Games Tokyo 2020 was a turning point for table tennis in Japan. A quarter-final match with a seemingly impossible comeback that would even be far-fetched in a good Hollywood summer movie, followed by a fairytale ending of the Underdogs taking first place on the podium in their home stadium was as perfect as sports stories come.

It may seem like fate now, but the decisions made to get from point A to point B and come away with gold have been carefully planned over the past two decades.

The JTTA, under the leadership of Vice President Mashiro Maehara, has taken a holistic approach to developing table tennis in Japan. There is the technical side of the sport; tabletop exercises, physical conditioning, psychology and nutrition. It is the necessary grunt work, sweat, tears and sacrifice of an athlete. But then there is the other side of the coin. Provide a path that fosters athlete development and create an environment that amplifies their fame and success. It is in this area that Maehara has sought to excel, in a process described for twenty years. It’s no coincidence that Japanese star athlete Mima Ito will soon be celebrating her 21st birthday. Ito is the poster child of the Maehara model.

Education has been at the forefront of Japan’s strategy. Getting coaches acquainted with the technical knowledge and know-how that will enable them to develop world-class athletes is not an easy problem to solve.

This started to materialize in the late 1990s when the JTTA invited Soren Ahlen from Sweden and Mario Amizic from Croatia in the early 2000s to join the Japan coaching staff. It was an echo of days gone by when Sweden looked to Ichiro Ogimura for help reinvigorating his table tennis; but this time Japan was trying to modernize. The Japanese coaches were able to learn new theories and methodologies of training methods, camp management and coaching.

“Since 2001, we have held coaches meetings at national under-12 events to conduct training seminars to educate on world trends and Japanese style of play,” Maehara explained. “The content of obtaining the qualification for Japanese training has been carefully reviewed and improved to meet world standards. “

As the skills of the coaches improved, they were able to attract and develop more talented players from all over Japan. But the teaching is not only theoretical. A coach is not only trained from a manual, he needs hands-on learning to hone his skills and put them under pressure in real-life situations. JTTA identified that not all of the answers were at home and that it was best not to put all of their eggs in one basket.

Coaching experience on the international stage comes with more than the chance to win medals; it is the best school to learn where table tennis is going. As an island nation, the possibility of remaining isolated must be faced head-on. A sustainable model has been developed to tap into the rich vein of international table tennis and the knowledge that goes with it.

JTTA established a system in which the personal trainer of the athlete was allowed to attend international tournaments with their players.

“In order to respect the fact that players and coaches are usually trained together in their own teams, we have implemented a personal coach system,” Maehara explained. “This has allowed the coaches to participate in many international tournaments and to improve their coaching skills. “

It was a decision that empowered athletes, allowing them to have greater control over their own athletic careers. There is nothing more personal than who you turn to on your bench during tough times on the international circuit. Ito’s trainer, Taisuke Matsuzaki, is the perfect example of this model in action. A mainstay of the international scene for years now, the coaching system has given Matsuzaki the opportunity to fill his famous tactics book ten times more than if he were back home watching through a screen. .

Enabling personal trainers on the international stage has had the effect of exponentially increasing knowledge of table tennis. The lessons learned on the international stage could now be directly transmitted to the widest possible audience in the country. Instantly, more athletes had access to world-class coaches who saw firsthand what it takes to compete with the best. Each coach would be in contact with many developing athletes all over Japan, whether in clubs, high schools, universities or corporate teams. The model ensured sustainability, growth and ultimately an Olympic gold medal, with real chances of more to come.

With Tokyo 2020 now behind them, the Japanese association seeks to continue its educational model. It is an ever-changing and constantly evolving process.

“The preparations that have taken place to obtain the gold, silver and bronze medals, as well as the activities aimed at strengthening the team, will be summarized and a seminar will be organized to pass on the legacy to the instructors of the country” , said Maehara.

The other part of the puzzle for Maehara was how to have an informed and engaged media presence. Sport does not exist in a vacuum, and table tennis education does not end only with coaches and athletes. Communicating with a wider audience and building an engaged fan base is essential to the success of a sport. Headlines, shots, fandoms and talk are all part of participating in sport and belonging to one’s community. The media are the gateway to achieving this.

Likewise, the presentation of events and strong media relations are the means to generate enthusiasm among new players for table tennis. It’s about building a sustainable sport in which potential new athletes have a clear path and the reward for success is not a fantasy but a reality. Inspiring the next generation to get into and keep on playing table tennis is just as important as learning the latest technical and tactical trends. It is a responsibility that Maehara took to heart.

“We believe that it is the role of the association to further improve the implementation of media training, interaction with the media, improving the presentation of events and trying to develop players popular with table tennis fans, ”he said.

An active role in the promotion and education of sport to the general public is crucial. Even in a country like Japan which shares a rich cultural history with table tennis, this is necessary. It’s just as competitive off the table and in the new media landscape. Trying to show off your star players is a challenge. It is not enough to simply win medals. Interaction with fans through the media is fundamental, because once success comes, it’s an opportunity to amplify your sport.

This is a consistent guideline in Maehara’s strategy for action; education and commitment are essential.

“We organize a personal exchange with the media once a year,” says Maehara. “We explain table tennis rules, equipment and tactics around the table, and give the media and young players time to really play against each other.”

Japan has been proactive in building relationships and guiding the public’s appreciation for table tennis. The effects of this are obvious. According to Maehara, not only has this resulted in increased and better media coverage, but it has inspired new generations to embrace table tennis with more passion and seriousness than ever before.

Mima Ito herself saw the importance of table tennis in the media as an influence for the pursuit of gold at Tokyo 2020. The rise to media stardom of Ai Fukuhara and Kasumi Ishikawa was part of which laid the foundation for Ito’s career.

“I think they are the starting line to bring table tennis back into the spotlight in Japan and I really wanted to go that route,” said Mima Ito.

Now Ito is firmly in the limelight, and not only is he brighter, but the audience has grown bigger. With gold at Tokyo 2020, the process initiated two decades ago has come full circle.

“I have heard that many people who watched the Japan vs Germany and Japan vs China mixed doubles match have changed their image of table tennis and have a great interest in the sport,” Ito said. “I am really happy and honored to hear that people are very interested in this sport or are motivated after seeing me play. I have received many letters from people such as “I will train harder so that I can improve at table tennis” and “I will start playing table tennis”. I am really happy for these letters.

Maehara’s model is a model that constantly empowers athletes. The strategy increased athletes’ access to world-class training, control of their athletic journey, and provided a real opportunity for a lasting and successful career with a chance to become a sports celebrity. It is an achievement made possible only by a coherent and coordinated effort.

“I would like to express my sincere gratitude to all the staff and like-minded people who have worked with me to support the Japanese team,” said Maehara.

The discussion can continue on the tactical or technical choices that led to the success of the Japanese Tokyo 2020 campaign, but it should not be forgotten that behind the scenes it was a twenty-year effort to promote the environment. that could allow success to flourish.

Standard set, which can follow; Does Cali have the answers? – TBEN

TBEN recognizes Anju Bobby George as “Woman of the Year” |...

Irina Shayk wows in a revealing look as she supports Bradley...