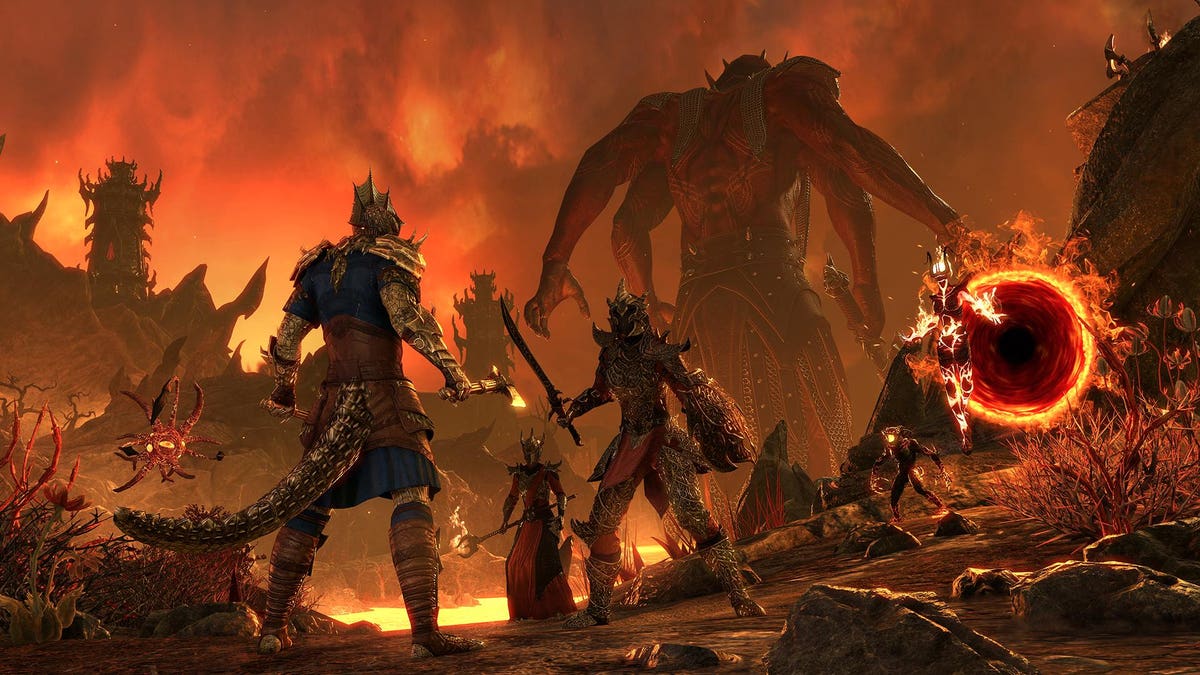 Today, at the gates of oblivion, an event for Elder Scrolls Online, Zenimax Online Studios has announced that the official name of the upcoming Fifth Chapter expansion will be Black wood and it hits PC and Stadia on June 1, followed by Xbox One and PlayStation 4 on June 8.

The next dungeon-focused DLC pack, Flames of ambition, is scheduled for March 8 on PC and Stadia, followed by Xbox One and PlayStation 4 on March 16. As always, there will be another DLC dungeon pack in Q3, likely September, and then a final story-based DLC area for Q4, likely in November. This latest DLC in Q4 story will likely take place mostly in the Deadlands in Oblivion’s plans.

All of this year’s content fits into the ‘Gates of Oblivion’ year storyline, similar to Year of the Dragon for Elsweyr and Dark Heart of Skyrim for Greymoor. This means that while each of the four pieces of content released this year can be enjoyed on their own as stand-alone stories, it will of course be best enjoyed as a full narrative, in order, throughout the year.

According to Zenimax, the Blackwood expansion includes over 30 hours of new story content, a brand new area including the Imperial City of Leyawiin (yes, the same as that of The Elder Scrolls IV: Oblivion), Niben Forest, the Blackwood Bog Wetlands, a new 12-player trial named Rockgrove, Oblivion portal world events, new digs, world dungeons and bosses, and more. The press release also mentions “quality of life improvements” without giving details and reveals that a new NPC companion system is in the works.

The companion system is extremely exciting, especially for fans of Bethesda single player games. NPC companions are a big part of single player mode Skyrim and Fallout 4 games and have just been introduced in Fallout 76.

Once Blackwood is released, we will be able to travel with, fight, and recruit NPC allies with their own unique backgrounds and character histories. They are described as “Unique Warriors,” so it’s unclear whether these will be pre-written named NPCs or unnamed mercenaries. If this is the first one, I hope there is a lot of choice so that not everyone has the exact same follower everywhere.

We’ll be able to upgrade them, assign skills, and even use “customizable combat gear and abilities and behaviors,” which looks particularly appealing. Hopefully, we can also assign custom housekeeping routines, similar to the path that was introduced last year for merchants and other NPCs in the house.

As interesting as this new expansion may sound, it should be noted that the team at ZeniMax Online Studios seems determined to retread the beaten track with most of its annual chapter expansions in Elder Scrolls online. Of Morrowind at Skyrim, and now Oversight, each of the franchise’s most beloved entries recreates some of its most iconic landmarks in the digital universe of Elder Scrolls online. It’s not necessarily a bad thing, but regaining the nostalgia is a tall order.

Frankly, it’s no wonder my favorite expansion has been Summerset, the second major expansion that features the lush, verdant lands of the Island Province. It is one of the least explored areas in all of Tamriel so it was really cool and inviting.

Black wood releases on PC and Stadia on June 1, then on Xbox One and PlayStation 4 on June 8. No word yet on release date for PlayStation 5 or Xbox Series X versions | S of Elder Scrolls Online, but it is confirmed that they are under development.

The Bharat Express News - February 28, 2021 0
Lorraine Kelly reveals she and her family have gone through 'very difficult...