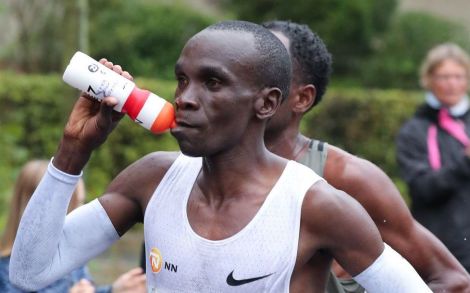 Marathon legend Eliud Kipchoge has auctioned off some of the iconic items he has won and used throughout his racing career.

Together with Catawiki, Kipchoge auctioned the items with the aim of raising funds for the Eliud Kipchoge Foundation, an organization that supports children’s education and environmental conversation in Eliud’s homeland of Kenya.

Among the items up for auction are his running shoes, specially designed water bottles, wristwatches and a signed running bib from the 2018 Berlin Marathon, which broke the world record.

“Catawiki is hosting a charity auction in partnership with the Eliud Kipchoge Foundation, an organization supporting children’s education and environmentalism in Eliud’s homeland of Kenya,” they wrote on their organization’s website. .

They added that “all of the special items up for auction represent iconic moments in Eliud’s running career, including a signed running bib from the 2018 Berlin Marathon which broke a world record.”

The auction period for items is expected to close on October 3, 2021 and the winners of the individual items will be announced.

At the top of the auction list are his iconic marathon shoes, Nike ZoomX Vaporfly Next% 2 “OG”. It is hand signed by Kipchoge and was placed on the website in an open auction. The shoes come with a certificate of authenticity from the management of Kipchoge.

Another iconic item up for auction is the special BIB number assigned to it by automaker BMW after winning the Berlin Marathon in 2018.

In addition, his hand-signed book NN Running Team 2018 has also been up for auction, already attracting bids.

Kipchoge also auctioned off his iconic running water bottles specially designed for him.

All items are auctioned on an open bid. Whoever places the highest bid has the option of owning the item.

A racing watch specially designed for him was also auctioned.

All auction items have been signed by Kipchoge. The call for tenders is already attracting a large number of bidders, before the closing date.

On Thursday September 9, Kipchoge launched its Foundation. He expressed optimism at the launch, saying needy students across the country will benefit from the foundation’s program.

“I am very grateful to launch my Eliud Kipchoge Foundation today. My mission is to give learners all over the world access to knowledge and education, ”said Kipchoge.

The two-time Olympic gold medalist added that his focus on education was driven by his experience as an athlete.

“From my own experience, I have seen that most athletes have dropped out of school and tried to build a life without education. But with education, it can help you grow and it can help you develop your community alongside you, ”he added.

Eliud Kipchoge during a marathon

Foreign tycoons who tried to buy Kenyan companies but failed