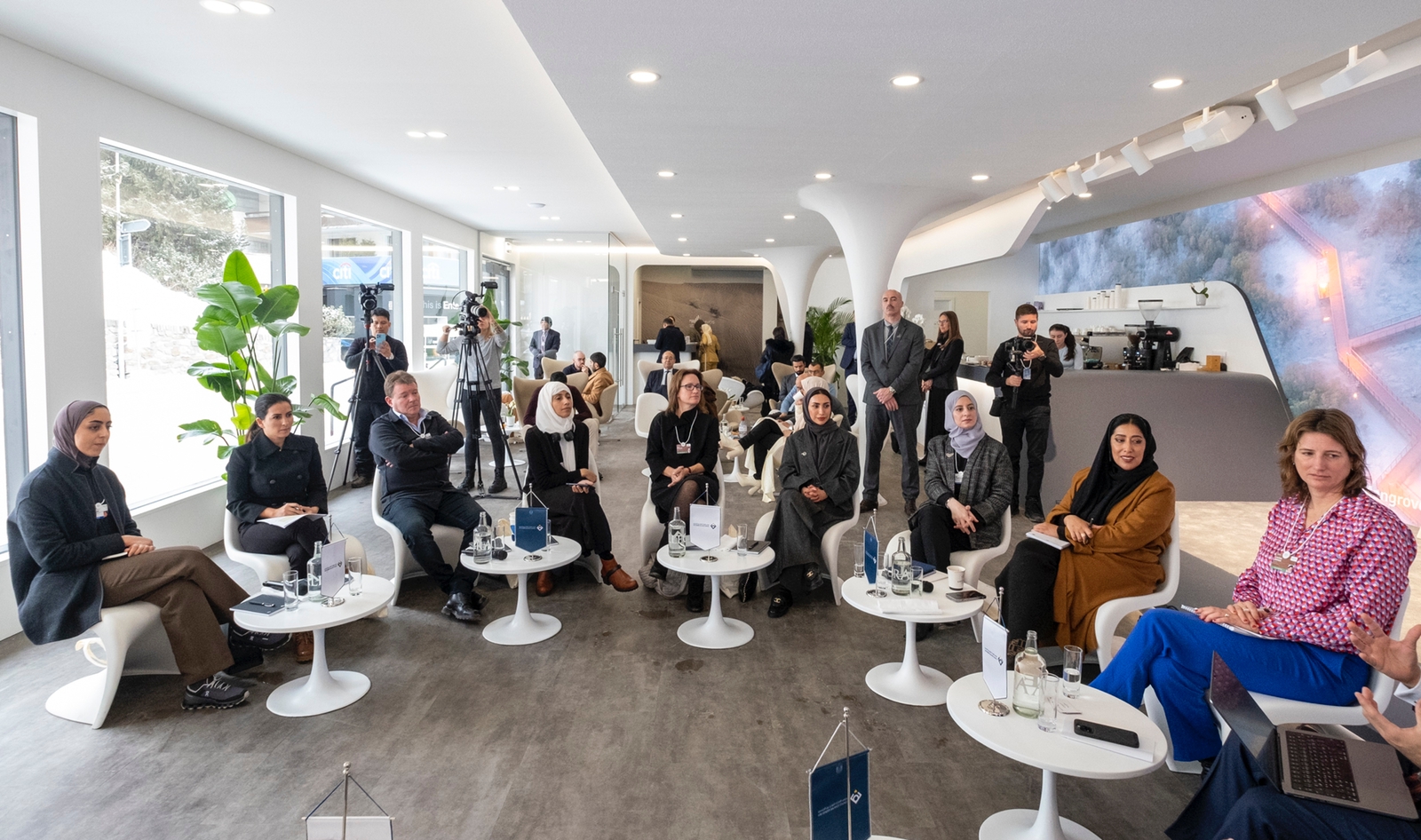 The Emirates Council for Gender Balance organized in Davos, Switzerland, the seventh edition of the “Global Balance Rings”, under the title “Supporting the private sector to governments in implementing the gender balance agenda – a pledge to accelerate the fifth goal of sustainable development in the UAE private sector: a case study”, as part of The participation of the Council delegation in the World Economic Forum, which is held in the presence of many heads of state and leading personalities to discuss global issues and find solutions to current and future challenges.
The seminar was held in the UAE pavilion at the World Economic Forum, and Her Excellency Mona Ghanem Al-Marri, Vice President of the Emirates Council for Gender Balance and a number of officials of the UAE private sector companies that signed the pledge to accelerate the fifth goal of the sustainable development goals, which was officially launched in early Last year, with the aim of achieving gender balance in the private sector and increasing the percentage of women’s participation in leadership positions to 30% by 2025, in addition to a number of officials of major international companies that have close cooperation with the World Economic Forum.
Anticipating opportunities
The seminar was a vital platform for exchanging visions and ideas among the participants from local and global private sector leaders about the benefits of working closely with governments to participate in developing solutions to accelerate sustainable development goals, and explore opportunities and areas of action to ensure higher levels of gender balance in the UAE, the region and the world, in addition to To discuss the desired positive impact of this unique initiative for the UAE private sector, which reflects a true partnership between the government and private sectors to achieve national and global goals related to gender balance.
Global partnerships
The wife of His Highness Sheikh Mansour bin Zayed Al Nahyan, Deputy Prime Minister and Minister of the Presidential Court, Her Highness Sheikha Manal bint Mohammed bin Rashid Al Maktoum, President of the Emirates Council for Gender Balance and President of the Dubai Women’s Foundation, said that the organization of the seventh global balance circle in this most prominent forum in the world comes in In light of the Council’s keenness to strengthen its global partnerships and translate the tireless efforts of the UAE to enhance global communication and build bridges of trust and mutual knowledge with all countries of the world to raise the level of gender balance and achieve sustainable development goals.
Her Highness stressed the importance of the overall positive results of strategic partnerships between governments and the private sector in achieving national goals at all levels, especially with its growing role as a major driver of the global economy in developed countries in particular, adding that giving women full opportunity and achieving gender balance in this sector It plays a major role in achieving economic prosperity and social and family stability.
Future visions of rational leadership
Her Highness, Chairwoman of the Emirates Council for Gender Balance, affirmed that strengthening the role of the private sector is essential in achieving sustainable development, and is a priority within the future and proactive visions of the wise leadership and its keenness to consolidate flexible and advanced legislative structures that have made the UAE one of the leading preferred destinations for living and residence, and have contributed to attracting major companies. It also made it a flexible, developed and more stable economic model in the face of global crises and future challenges. Her Highness indicated in this regard that the cumulative balance of foreign direct investments flowing into the country amounted to about 630 billion dirhams (171.6 billion US dollars) during the ten years from 2012 to 2021. With a growth rate of 116%, according to the statistics of the Ministry of Economy.
An inspiring goal and a global role model
Her Highness Sheikha Manal bint Mohammed bin Rashid Al Maktoum added, “The inspiring goal of the ‘UAE private sector pledge to accelerate the fifth goal of sustainable development goals and enhance gender balance in the private sector within the main axes to which private sector institutions voluntarily committed themselves, will be a model for the region and the world.’ We are happy to share this qualitative experience with the global private sector, and we are also pleased with the interaction of local private sector institutions with this voluntary pledge, which has been joined by 56 national and international companies and institutions operating in important economic and strategic fields in the UAE and many countries of the world, and during the coming period the announcement will be made Successively, other companies joined it,” expressing Her Highness’s aspiration to work closely with the private sector during the coming period, in order to enhance the local and international achievements of the UAE in the field of gender balance.
Explore opportunities
In turn, Her Excellency Mona Ghanem Al-Marri stressed the importance of the topics raised for discussion during the seventh global balance session, which touched on the most prominent challenges of gender balance, and exploring current and future opportunities to overcome them, noting that eliminating obstacles to gender balance is a fundamental pillar for achieving economic prosperity. Community stability and sustainable growth, through the optimal investment of the potential of all members of society without prejudice or discrimination, which is what the UAE has worked on since its establishment, and is currently being reinforced by the wise leadership with pioneering legislation and policies that consolidate the rights and gains of women in the labor market and assign them to senior and leadership positions and enhance their representation in industry-making centers the decision.

Voluntary undertaking
During the inauguration of the seminar, Her Excellency Mona Al-Marri highlighted the “Pledge to Accelerate the Fifth Goal of Sustainable Development in the Private Sector” initiative, noting that it is a voluntary pledge by the UAE private sector and the result of two years of exchanging visions and ideas with the National Committee for Sustainable Development Goals on the best ways and practices to enhance balance. gender in this sector, and in particular raising awareness of the importance of ensuring the full and effective participation of women and equal opportunities at all levels of decision-making. Gender equality, including senior leadership positions, mainstreaming a gender balance perspective in policies and programs governing work in companies to support employees, and finally being transparent and providing the Emirates Gender Council with the steps achieved in each company.
She said, “We are pleased that the companies that signed the pledge in its four stages during the year 2022 are meeting together in Davos for the first time, during the activities of the World Economic Forum, which represents an ideal opportunity to discuss the impact of this qualitative initiative and the value of joint work across various sectors to establish gender balance in each institution and across the broader economy, and to illustrate the implications of the successes that can be achieved when government and the private sector work as partners with a common goal to find solutions to the various challenges related to gender balance.
The discussion touched on the benefits of joint work between governments and the private sector to develop initiatives at the national level by benefiting from this experience, especially since the companies joining this pledge belong to various economic sectors.

balance rings
Her Highness Sheikha Manal bint Mohammed bin Rashid Al Maktoum launched the “Global Balance Rings” initiative in 2017, as an inspiring platform to promote global dialogue on the best policies in support of gender balance at all levels and accelerate the pace of work to achieve the fifth goal of the sustainable development goals. Emirates for gender balance within the framework of this initiative, 6 previous seminars were held in New York and Washington (2017), Brussels (2018) and Dubai (as part of the World Government Summit 2019), while the fifth seminar was held in March 2021 via the Internet on the sidelines of the 65th session of the Status Committee Women (CSW65)), affiliated to the Economic and Social Council of the United Nations, and the sixth seminar was organized last September in the British capital, London, under the title “Women and Entrepreneurship”.
It is worth noting that the UAE ranked first in the Arab world in the Gender Gap Report 2022, issued by the World Economic Forum, and ranked first in the world in 5 sub-indicators within this report, namely: girls’ enrollment rate in primary education, girls’ enrollment rate in secondary education, Girls’ enrollment rate in university education, gender ratio at birth, and women’s parliamentary representation. The report indicated that the UAE is the best in the world in the representation of women in parliament (where women represent 50% of the number of members of the Federal National Council), and its ministerial representation in the state government (27.5%) is one of the highest rates in the world.

A young man implicates his girlfriend in a loan of 75,000 dirhams and stops paying