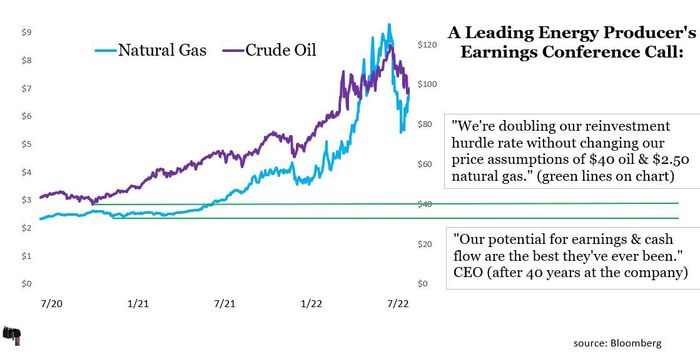 One of the few numbers that is growing faster than energy stock dividends is the size of the crowds who are convinced they are not sustainable. I’ve never seen such a negative consensus on an entire industry as I have on traditional energy.

The debates are so one-sided that the simple cues of dividends are overlooked, and instead, more attention is being paid to when traditional energy companies cease to exist.

Still, dividends provide investors with better proof of what exactly works than any mob. As a professional portfolio manager since 1996, I’ve studied every imaginable factor for investing success and have found no other measure with such a long track record. A dividend is paid without opinions about what is real – and that is even more valuable when energy stock confusion is at an all-time high.

The potential to pay and increase energy dividends has never been greater, largely because the sector is considered uninvestable by so many – a remarkable paradox.

Rather than picking out individual stocks, perhaps it would be more helpful to investors if I could at least add some curiosity to their views of the group, away from consensus belief.

Start with simple supply and demand. Masses of votes, regulation and protests to end fossil fuels have resulted in least oil CL.1,

discoveries last year, since 1946. Yet the number of households worldwide has more than tripled since then, requiring more products that in turn require more petroleum to produce.

Between now and 2050, the United Nations’ goal of net zero carbon emissions, demand for traditional energy will not only support dividends with more free cash flow, but significantly increase those dividends going forward.

Perhaps the biggest surprise is a special climate dividend from the most unlikely of sources.

Mathematics and mindset of stakeholders

The stupidest idea of ​​ESG investors protesting against corporate ownership of energy stocks was that forcing them to sell would limit the capital needed to operate.

Oil and gas companies have no problem finding money. In the past, they have been so reckless in issuing stocks and debts, fueled by greed to chase higher prices, that they can go bankrupt on their own. Speculative investors poured money into shale projects that never yielded cash flow and destroyed capital. The shale tree was a great lesson in geology and terrible math.

Focusing on a dividend requires discipline and more conservative math. A few of the highest quality energy producers have begun to formally align their interests with stakeholders, showing the math on which to base dividend forecasts and using assumptions about commodity prices that are anything but greedy.

Investors are overlooking this monumental shift in mindset that has taken place since the last time oil and gas prices were this high.

Here’s an example of one of the many companies that have learned from boom-and-bust cycles to use more conservative math. The green lines are assumptions about oil and gas prices that are used to forecast their free cash flow for dividends to be paid (one-half and one-third of current oil and gas prices as of July 2022).

Contrary to previous cycles, the balance sheets of some power producers are now impeccable; their net long-term debt has been reduced or eliminated. Combine that with raising their own internal investment thresholds before considering new projects, and they’ve made the math so much harder on themselves. Stakeholders benefit directly from this.

The best operators I study have learned hard lessons. But as a portfolio manager I don’t take their word for it, I just stick to the math, which leaves no room for opinions.

Free cash flow is gushing, leading to more dividends and less speculation. In fact, they can be bought at cheap prices compared to the overall market thanks to forced selling pressure. This chart shows the current enterprise value divided by the remaining 12 months of free cash flow. Each of the largest energy companies is significantly below the average of all sectors in the S&P 500, at 35.

The advantage of quiet truths

Energy dividends are increasing as a result of our diminishing ability to have honest dialogues in this country. Our democracy has chosen to make it difficult or impossible for energy companies to grow their operations. So they do what they can with the free cash flow: pay off debt, buy back stocks, and grow their dividends.

The crowds have made it increasingly difficult for energy companies to transport oil and gas and even more difficult to refine it. Those giant pieces of energy puzzle have a more direct impact on American households’ daily spending than the price of a barrel of oil. Moving energy through pipelines safely and affordably requires growing infrastructure that is now nearly impossible to build or expand.

A pipeline project with the most potential to add capacity was finally halted in 2021, after being proposed in 2008, and fully supported by long-term contracts from producers in Canada. Instead, oil sands are loaded onto rail cars and transported to the US much less efficiently with greater environmental risks than pipelines.

I asked my good friend Hinds Howard, a leading expert on energy pipelines, about other recent developments with a chance. He pointed to another project that will compete to get it done someday after three years of approval. The original cost estimates have nearly doubled, if only due to legal work around additional regulatory delays.

Energy refining capacity is even tighter. Instead of years of no growth and regulatory delays, refineries are being eliminated. In the past three years alone, four refineries have been shut down and two partially closed. Two more will be closed. Six have been converted to renewable diesel. That is a net reduction of more than 1 million barrels per day.

Then we’ll be surprised if the growing demand for limited supplies leads to higher prices? The historically unique opportunity for investors is the irony that masses of voters and protesters want to end the use of fossil fuels, making energy dividends of the highest quality surviving operators safer than ever before.

Read: What would it take for US oil companies to ramp up production? A lot.

The most surprising dividend

Until now, I’ve relied on pure math, which I love because it leaves no room for an opinion, not even mine. Here’s my one guess, based on capitalism’s cleanest-burning motivation to reward problem solvers: who better to lead us to cleaner energy than those who know exactly where it’s dirtiest?

I recently visited a CFO of an energy company, and he was very enthusiastic about a closed loop gas recovery project to reduce gas flaring. The company developed this unique technology to solve a problem that caused it, and it’s been significantly more successful than expected.

The new goal is to routinely burn down by 2025, and the company has more than doubled its climate technology budget over the past three years to help achieve that and try more projects.

Traditional energy has already become cleaner and more efficient. The number of pounds of CO2 emitted for every $1 of US GDP has more than halved since 1990. That is not a solution, but it is the right direction and the common good of the stakeholders of this planet.

Innovation is more efficient than regulation. Energy companies in the US already have the best climate technology in the world, and it’s not even close, and they can improve it all significantly. We should use our advantages here. Traditional energy companies play a big part in a more sustainable future and will pay more dividends to get there.

Ryan Krueger is CEO of Freedom Day Solutions, a money manager based in Houston, and the CIO of the company’s dividend growth strategy. Follow him on Twitter @RyanKruegerROI.

OPINION: It’s time to buy the sell-off in energy stocks, starting with these 4 names

Oil prices have risen. Still, these three energy ETFs remain a relative bargain. Can you cash in?

This dividend fund is down just 3% this year from the 20% drop in the S&P. Here are the manager’s best stock picks.

If you support green energy, you should buy utilities and oil stocks – here’s why