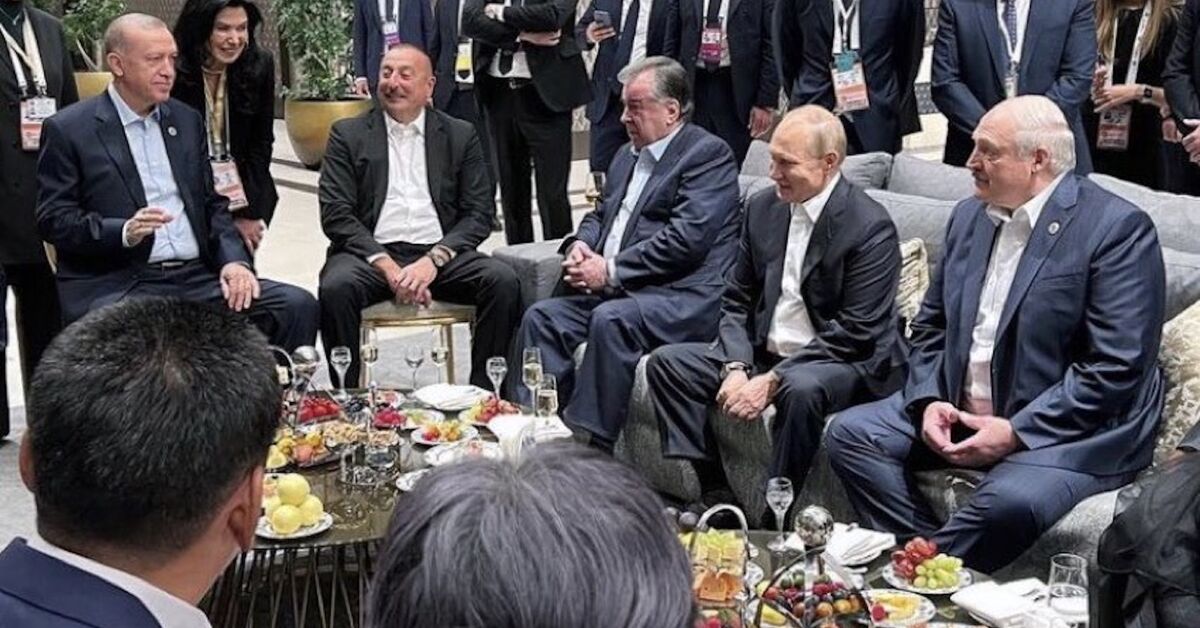 The Turkish and Azerbaijani presidents gathered today in Samarkand, the historic Silk Road city in Uzbekistan, which will host a two-day summit of the Shanghai Cooperation Organization (SCO) amid renewed hostilities between Baku and Yerevan.

The 40-minute meeting between President Recep Tayyip Erdogan and his Azerbaijani counterpart Ilham Aliyev comes before Erdogan’s meeting with Russian President Vladimir Putin on the second day of the summit. In addition to the flare-up between Armenia and Azerbaijan, efforts to improve the grain corridor in the Black Sea are expected to top the agenda of the Putin-Erdogan meeting.

Putin last week expressed concerns about the grain deal, which Erdogan helped broker in July. Under the deal, Ukraine was allowed to export 5 million tons of grain per month, allaying fears of a global food crisis. To secure exports, Russian, Ukrainian, Turkish and UN officials have set up an operations center in Istanbul to guide commercial vessels from Ukraine through minefields in the Black Sea. The Turkish Defense Ministry announced today that more than 3 million tons have reached global markets in the past 46 days.

Putin, who said the grain was not reaching developing countries, threatened to pull out of the deal last week. Russian officials also complained that parts of the agreement designed to help Russia sell its fertilizer and other agricultural products amid sanctions did not have much effect.

Erdogan supported Putin’s claims and said the Russian president was right when he said Ukrainian grain would go to rich countries instead of developing countries. He has also sided with Russia’s concerns about fertilizer exports, which he believes the world needs.

In an interview with the official Turkish news agency, Anadolu, UN Secretary-General Antonio Guterres said he was working with Turkey and other actors to solve “access of Russian food and fertilizers to international markets”.

“We are doing everything we can and working with the US, the EU and others to ensure that what has been said over and over, that sanctions do not apply to food and fertilizer, translates into reality, and we have the Russian fertilizers are desperately needed at a time when we see a shortage in the fertilizer market,” said the UN Secretary-General. “We are also negotiating the export of Russian ammonia via Ukraine. One of the things that has become clear is that this will create the conditions for an extension of a program over time, especially if that program is designed in a way that benefits both countries.”

Turkish Foreign Minister Mevlut Cavusoglu said on Wednesday that when Russia complained about possible restrictions on its grain exports, he called US Secretary of State Antony Blinken and Guterres. Cavusoglu said Russia’s grain deliveries are not subject to sanctions. Still, there are other restrictions hampering exports from Russia, including the ships’ inability to take out insurance or even be received and serviced in some ports, he said.

While Turkey and Russia largely agree to cooperate on Russian fertilizer exports, the conversation over Armenia and Azerbaijan could be more difficult. No official statement was made after Thursday’s Erdogan-Aliyev meeting, but Turkey, unlike Russia, has unequivocally supported Azerbaijan, which in 2020 it helped fly part of Armenia’s territory for 30 years with drones. retake occupied territory.

Defense Minister Hulusi Akar spoke with his Azerbaijani counterpart Zakir Hasanov on Thursday to get the “latest information on the ground” following Yerevan’s announcement that a ceasefire had been agreed at the end of Wednesday. Akar also promised the “strongest possible support‘ to ‘brotherly Azerbaijan’.

Erdogan is likely to urge Putin to use his influence over Armenia to give in to Azerbaijani demands, Amberin Zaman reported Wednesday. For example, Armenia has renounced its claims to Nagorno-Karabakh, which is part of Azerbaijan but has an Armenian majority.

Russia said on Thursday it wanted to reverse any shift in military balance in the region that had occurred as a result of this week’s fighting. “We are in close contact with both countries to achieve a lasting ceasefire and the return of the Azerbaijani and Armenian military to their original positions,” Reuters quoted Russian ambassador to the UN Vassily Nebenzia as telling the Security Council. on Thursday.

In addition to Putin, Erdogan will also meet with Chinese President Xi Jinping on the second day of the summit. Xi and Putin met on the first day of the summit, where Putin praised the Chinese leader for what he said was a “balanced” stance on the conflict.

Erdogan’s visit to Samarkand marks the first presidential-level participation in the SCO since Turkey “obtained dialogue partner status” with the SCO in 2012, according to a statement from the presidency. Saudi Arabia, Qatar and Egypt are also dialogue partners in the organization, while Iran started the process of accession for membership last year.

Asked if Erdogan would meet Biden on the sidelines of the meeting, a top diplomatic official told journalists in Ankara that no meetings were planned at the presidential or ministerial level.

Erdogan, who insists on strict security measures on all his trips abroad, will not attend Elizabeth II’s funeral on September 19, although he had previously said he wanted to go. Turkey is represented by Cavusoglu.

Iranian Kurdish exiles in Iraq under fire as protests rage