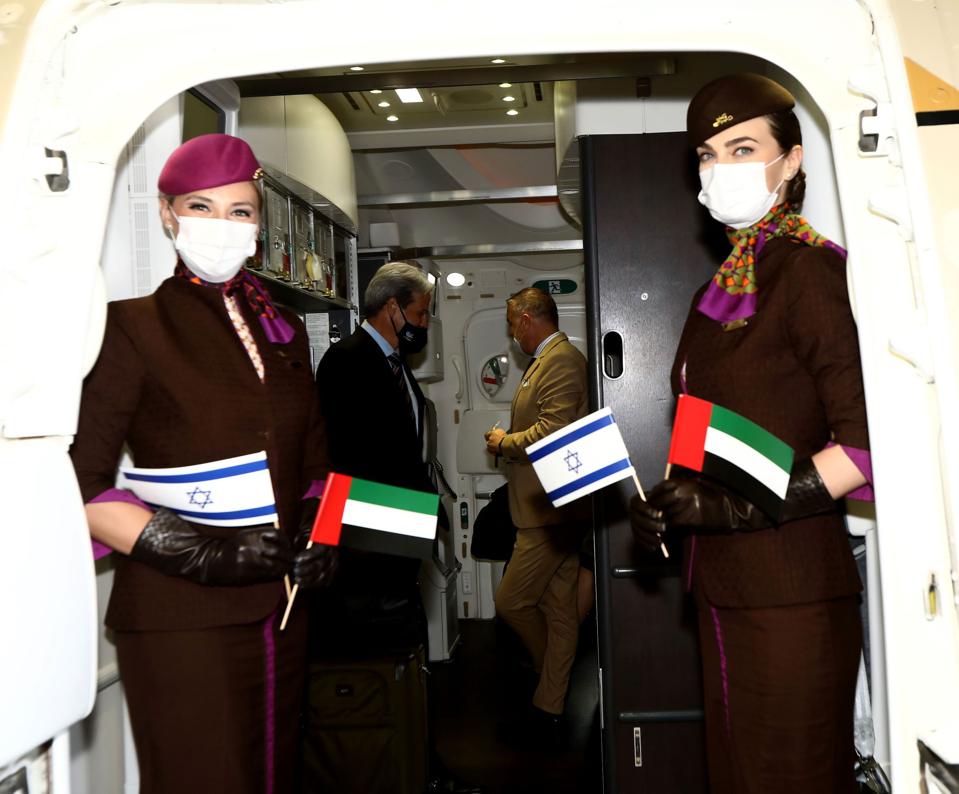 The world has changed during the years of the pandemic in unexpected ways. Journalists are constantly informed of “historical” developments, most of which are quickly forgotten. But Etihad Airway’s launch this week of commercial air service between Abu Dhabi and Israel, based on the warming of diplomatic relations between historical adversaries, is truly a creator of history.

Etihad Airways, the national airline of the United Arab Emirates, has launched a twice-weekly scheduled service between Abu Dhabi (AUH) and Tel Aviv (TLV), marking the latest development in warming relations between the two countries. The service will join similar flights between Dubai (DXB) and TLV that started in December, flying over Saudi Arabia.

The Abu Dhabi / Israel flights reflect “the growing cooperation between the two nations following the establishment of diplomatic, trade and tourism ties,” according to a press release from Etihad. This is a consequence of the Abrahamic Accords, “a peace treaty, diplomatic relations and full normalization between the United Arab Emirates and the State of Israel.”

The agreements take their name from the “common ancestor” of the “Arab and Jewish peoples”, the biblical character Abraham. Some of the diplomatic and trade relations include the exchange of embassies, as well as agreements on finance and investment, trade and economic relations, energy, agriculture and civil aviation.

Etihad will offer two weekly flights between Abu Dhabi and Tel Aviv, with service provided by the airline’s Boeing 787-9 Dreamliners. The planes have 28 luxury Business “studios” and 262 Economy smart seats, with Etihad’s e-box entertainment system and in-flight “wi-fly” connectivity. Although Etihad is known for its scandalous three-room residence on its Airbus A380, the airline says by 2023 the long-range and fuel-efficient 787 will make up 50% of its fleet.

Passengers departing from Tel Aviv can also connect with Etihad flights to 35 destinations around the world, including major cities in Asia, the Indian subcontinent and Australia. Etihad and Israel’s national carrier EL AL are cooperating on the AUH-TLV route and beyond. EL AL and Etihad signed a memorandum of understanding last year. It covers haring codes, freight cooperation, training and maintenance services, and the ultimate gesture of peace, allowing travelers to share frequent flyer points.

There is even an opportune COVID-19 angle to this story of warming relations between two historical antagonists. This week, Israel was added to Abu Dhabi’s “green list”, allowing visitors arriving in the city to travel without quarantine. Business and leisure travel is set to take off quickly, as the United Arab Emirates and Israel have two of the highest COVID-19 vaccination rates in the world.

In February 2021, Etihad announced that it was the first airline in the world to have a 100% vaccinated flight crew. The airline was also the first to require that 100% of passengers present a negative PCR test result before departure as part of the “Etihad Wellness” program. It also provides global COVID insurance with every ticket.

Abu Dhabi service to Israel began on April 6, 2021. Etihad Airways EY598, the first scheduled flight departed at 10:05 am and landed at Ben Gurion Airport at 12:30 pm Israel time. The plane, carrying a diplomatic and trade delegation representing the United Arab Emirates, was greeted with the now traditional water cannon salute.

“Today is an extremely important moment in Etihad’s history as we operate our first scheduled commercial flight to Tel Aviv,” Tony Douglas, CEO of Etihad Aviation Group, said at a ceremony at Ben-Gurion airport. “Last year we saw the United Arab Emirates and Israel make history by signing the Abrahamic Accords. We are extremely excited about the opportunities this presents for Etihad and our home in Abu Dhabi.