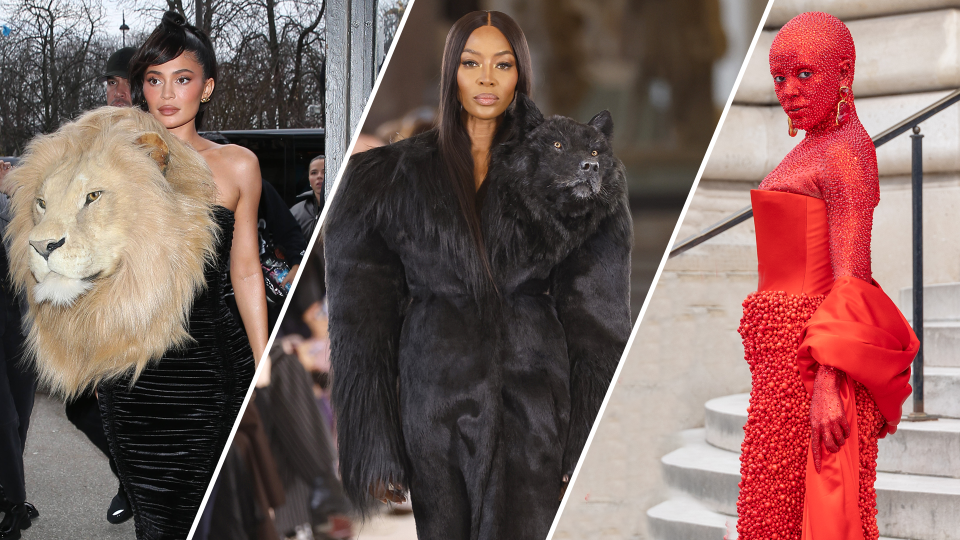 Paris Haute Couture Fashion Week is coming. Why do you need to know this? And why should you care? Well, Monday’s Schiaparelli show is causing a stir thanks to a realistic-looking lion head donned by Kylie Jenner, the embellished beauty of Doja Cat, and the extravagant runway looks.

Fashion lover or not, many people have an opinion about Schiaparelli’s latest work.

Pop culture commentator Cami Twomey points out that Jenner wasn’t the only person to wear a lifelike animal head as part of her look. Irinia Shayk even sported the same lion head down the runway, while Shalom Harlow sported a snow leopard on the front of her dress and Naomi Campbell sported a faux black wolf coat.

Behind-the-scenes moments posted to TikTok included a peek at Jenner stroking her fake lion’s mane while sitting in the front row, and Doja Cat arriving at her call time at 4 a.m. with makeup artist Pat McGrath’s team.

And finally, TikTok star Tinx posed the question we’re all wondering: How on earth did Doja get rid of all those crystals and paint after the show?

Style Not Com kept followers updated with a full coverage of the Schiaparelli show, which also gave some insight into Roseberry’s inspiration for the “Inferno” collection.

Both Jenner and the Schiaparelli brand used their own pages to assure onlookers that the animal heads were man-made. “NO ANIMALS WERE HARMED IN THE CREATION OF THIS LOOK,” the brand wrote, referring to the faux fur, foam and resin textures.

Defending the lion head, Shayk wrote: “I support these incredible artists who worked tirelessly with their hands using wool, silk and foam to sculpt this embroidered lion and the image of Pride, an image @schiaparelli evokes while exploring themes I am honored to also be called upon to lend my art as a woman to this @danielroseberry.’

Commentators had no problem expressing their unfavorable opinion.

“It is sickening to see the images of these endangered animals in the form of pelts!” noted model Christie Brinkley. “The beauty of these magnificent animals comes when we see them alive, respected, protected and walking free. This is a huge fashion FAUX ‘PAW’‼️”

“This is highly inappropriate,” wrote another, “gag or not, this should never have been designed.”

Jenner’s friends and fans also praised the look and channeling of her Leo energy.

As for Doja’s striking look, people were less offended by her ensemble but more shocked when McGrath revealed that the head-to-toe makeup took 4 hours and 58 minutes to complete.

Jenner’s look was both denounced and defended by people taking their thoughts to Twitter.

The only debate about Doja was whether the look was worth spending hours in a makeup chair or not.

Still, her efforts have been praised.

Wellness, parenting, body image and more: meet the Who behind the how with the Yahoo Life newsletter. Register here.